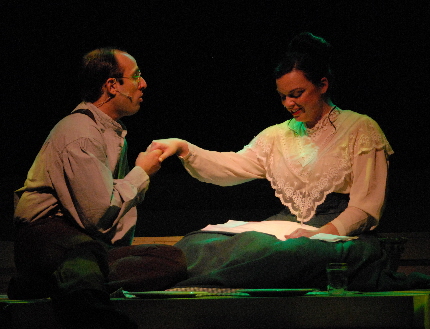 Courageous. Even if Slow Burn Theatre Company’s moving production of the dark and dangerous musical Parade wasn’t the success that it indeed is, the troupe would deserve honor for the fearlessness in choosing a pre-ordained tragedy about anti-Semitism that mixes soaring melodies with discomforting dissonance.

But this company specializing in large-scale thought-provoking musicals that few others attempt has again delivered an enviable piece of theater that challenges the audience as well as its artists.

The musical centers on the true-life century-old case of Leo Frank, a Brooklyn Jew who supervised a factory in Atlanta, was unjustly convicted of murdering a child in a trial notable for perjured testimony, sentenced to death, reprieved and then lynched while his case was being reassessed. No raindrops on roses here.

But amid the examination of mob mentality, religious prejudice, sensationalist journalism, political opportunism and the persistent influence of the past, the work embraces an uplifting core as the emotionally distant Frank and his disappointed wife break their restraints and grow together in love and respect. Near the end, the two utter “I love you” to each other as if they have only just now discovered their profound affection – all the more poignant because we know what they don’t: Leo is a couple of scenes away from his death.

The book by Alfred Uhry (Driving Miss Daisy and The Last Night of Ballyhoo) and the score by Jason Robert Brown (The Last Five Years and Songs For A New World) had a mixed reception when an epic Hal Price production bowed on Broadway in 1998. But over the years, the original cast album sparked productions by regional and college theaters, especially after the Donmar Warehouse in London staged a stripped down, rewritten version in 2007.

It remains difficult material for both the performers and the audience. The score melds the aforementioned key changes, atonal dissonance and soaring melody that reflect the chaos of the social background and the purity of the character’s emotions – often simultaneously. Much of the time, the company nails the material, sometimes it dances just a hair’s breadth out of the reach of their abilities.

Patrick Fitzwater, Slow Burn’s co-artistic director, has once again wrung affecting acting performances from his troupe while staging it with a choreographer’s bent for stylistic movement and tableaus. Much of the show moves so fluidly from one scene to the next that the engrossed audience cannot shake being dumbstruck long enough to applaud individual numbers.

Tom Anello masterfully creates the spiky and not terribly likeable workaholic Leo who keeps life and his wife at arm’s length. A nebbishy fish out of water, Anello seems, at best, socially uncomfortable in this world as alien to him as the dark side of the moon. At one point, he says of his fellow citizens, “These men belong in zoos.”  Slender, balding, with wire-rimmed glasses atop a hookish nose, Anello’s withdrawn restrained Leo is the perfect depiction of someone who does not and cannot fit in, assuming he would want to, which he doesn’t.

The actor is just as convincing as a leering lascivious lecher as three young girls slander him on the stand with an imaginary account of his unwanted advances.  Further, when Leo learns to connect with his wife and softens his exterior armor, the transformation is credible.

Anello’s expressive voice also is up to some of the most difficult discordant music that Brown has written for the show.

But in a cast of strong voices, Ann Marie Olson is in a class by herself as his wife, Lucille, blessed with one of most glorious mezzo-sopranos in South Florida theater. Her solos, “You Don’t Know This Man” and “Do It Alone” turn inner turmoil into sound waves. She doesn’t embellish the score, only serves it forthrightly with a full-bodied vibrance. As an actress, she bravely embraces Lucille’s disappointment that Leo has not been everything she hoped for in a husband. That disconnect is exemplified in that they have little overt chemistry for the first half of the show, which is as it should be.

But when the two Franks finally have their emotional breakthrough in the penultimate “All The Wasted Time,” they connect with a unleashed passion that brought many in the audience to tears.

The revised scale of this version has many of the 16 actors doubling and tripling in parts. This not only shows off their versatility but underscores the unabashed theatricality of the piece. Particularly intriguing is having Christian Vandepas play the conscienceless yellow journalist and then the governor whose conscience is awakened to take a politically suicidal stand in commuting Frank’s official death sentence and reexamining the case.

Several others have standout solos including Jerel Brown as treacherous janitor Jim Conley who leaps around the courtroom, onto the witness chair and the defense table during his increasingly ludicrous testimony in ”That’s What He Said.” Kaitlyn O’Neill is the grieving mother on the witness stand delivering the heart-rending song, My Child Will Forgive Me.”

Others in the cast include Kaela Antolino as the dewy victim Mary Phagan, David Klein as a vengeful young man who had a crush on Mary, Matthew Korinko as the increasingly corrupt prosecutor Hugh Dorsey, Renee Turner who does a hilarious duet with Brown as servants expecting Yankees in town for the trial, Murphy Hayes as the judge, David Sirois as the ineffectual defense attorney, Rick Pena as a hardline preacher and a race-baiting publisher, Dan Carter as several members of law enforcement, and Erica Mendez, Lindsey Johr and Kristina Johnson as the factory girls seeking their 15 minutes of fame and who will be familiar to anyone who has seen The Crucible.

Some of the cast’s success with the score is due to the oversight of musical director Manny Schvartzman. He led the solid live band with his keyboards along with Nick Trotogott, percussion; Wallace E. McMurray Jr., brass, Angel Hernandez, reeds, Ivan Prilepchanski and Natalie Tsai, violins, and Elena Alamilla.

Those seeking to carp can find a few vulnerabilities. Many accents don’t sound as if they come from south Georgian, not even north Florida. Also on its second night of performances, the sound crew was still getting the cues down, but that should improve quickly.

Finally, it’s awfully hard to portray virulent prejudice convincingly without villains twirling their moustache and indulging in slurs. In sidestepping that pitfall, this production almost submerges the blithe attitude when prejudice is so ingrained in the fabric of society that it becomes completely acceptable. The Atlantans’ hatred seems to result here from mob mentality rather than direct bigotry. At the same time, Uhry and Brown remind us in the glorious opening number “Old Red Hills Of Home” that this event occurs only 50 years after the Civil War and that Southerners have never admitted total defeat by those Yankees who Leo Frank embodies.

Something indefinable about the entire production isn’t quite perfect, but the cast and creative staff is so passionately committed to it and the raw material is so strong that it’s like watching the snowball roll down the mountain until it becomes a deadly avalanche.

It’s another mark in the credit column for the company whose production of next to normal has earned more Carbonell nominations for a single musical than any other production.

To read an earlier feature story about the production, click here. 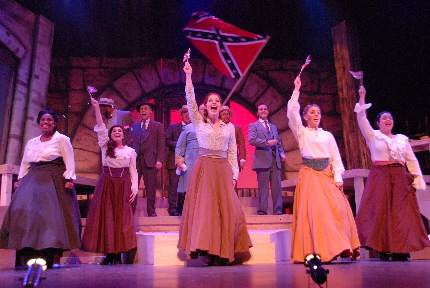