MNM Prepares A Man Of La Mancha Relevant For Our Times 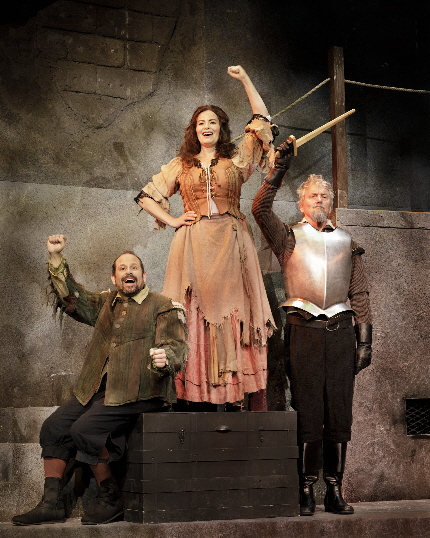 “When life itself seems lunatic, who knows where madness lies? Perhaps to be too practical is madness. To surrender dreams — this may be madness. Too much sanity may be madness — and maddest of all: to see life as it is, and not as it should be!”
—-Playwright Dale Wasserman quoting Miguel de Cervantes Saavedra’s Don Quixote

In this tarnished time of disaffection, divisiveness and abandoned ideals, the synergistic resonance of the musical Man of La Mancha is more than a welcome opportunity for director Bruce Linser.

Cervantes and Don Quixote’s hope-laden messages of aspiration for a better world — and our responsibility to bring it about — could not be more timely than this month when MNM Theatre Company mounts the classic musical at the Kravis Center in West Palm Beach.

With a quiet passion, Linser drove home the connection between a 1965 musical set during the Spanish Inquisition and 21st century America. “To me, it’s totally devastating. I’ve said to the cast so many times, ‘You have experienced this right now.’ ”

For instance, “There there’s a moment where a prisoner gets taken away to the Inquisition.  …And I said ‘This just happened right here on our soil. People being taken from their jobs taken from their homes. No explanation, no apologies, just gone.’ ’’

To that end, the veteran director-actor-educator hopes to take the audience deeper into a piece that audiences remember primarily from a beloved original cast album and well-intentioned but misconceived productions .

“Everybody says, ‘Oh, I love Man of La Mancha!’, and what they’re thinking about is, ‘Oh, I love ‘The Impossible Dream,’ which is a great song, and there are many great songs in this show. But what I think people forget is that there is a story underneath it with real characters in real life situations. And so they’re going to hear all of the great music that they’re used to. (But) I hope, I think that this production is going to cause them to sit forward and listen in different ways than they have before.”

His gentle demeanor became more animated. “That’s part of why I was so interested in getting us back to the gritty reality…. Many of the productions that I’ve seen, it becomes more about the singing and it becomes sort of operatic, and I just don’t think that’s what’s going on…. The music is beautiful and all of that, but there’s so much more to this story than just those famous standards that have now become standards. The depth of the lyrics get lost when you stand there and bellow.” So, songs will be sung more quietly, with more expression.

The intermittent scenes back in the dungeon will be key. ‘“I really want to focus on the darkness of the prison, the gritty reality of the prison. To me, what often happens is that it starts in a prison and sort of ends in a prison. But everything in between (in other productions) is kind of that fluffy musical theater thing. And I really want to explore bringing it back to that world (of the prison) all the time so that we don’t forget that we’re facing this ugliness, we’re facing this struggle.”

Not that the glorious score by Mitch Leigh and Joe Darion will get short shrift with veteran music director Paul Reekie leading a band of seven including some orchestration changes that will open most songs with an on-stage guitarist.

Plus the vocal talents of a 20-member cast led by Michael McKenzie (most recently in Theater Lab’s We Will Not Be Silent ) as Cervantes/Quixote and Anna Lise Jensen (Fun Home, Bridges of Madison County) as Aldonza, plus choreography by Christine Kellogg.

Unlike most productions in South Florida whose casts don’t get to rehearse on the actual set until two or three days before opening night, rehearsals are being held on the first story of the Dustin Hamilton’s two-story set because the company’s Boca Raton premises double as the scene shop.

Sitting at a Spanish style desk on the gray prison set, Linser grins. “This is really cool. It spoils me rotten. It makes a huge difference.”

But the spare design across a large stage and his vision for the piece produce challenges for a director who is accustomed to intimate detailed site specific sets that in themselves create a specific world such as his recent Spitfire Grill and Woody Guthrie’s American Song for Palm Beach Dramaworks..

To understand that challenge, understand his vision for the piece. Cervantes is a theater artist torn from a traveling troupe, He is telling a theatrical story to his fellow prisoners, using only the props and makeup in his theatrical trunk, plus whatever flotsam can be commandeered in the communal cell.

In some productions, that conceit has been violated with props, costumes and set pieces not found in a trunk or the cell.”All of a sudden there’s all of this stuff that comes out and I’m like where did that come from? …. So I’ve really tried to scale this one down to make it a true trunk show. Everything that we need to tell the story is either already here or comes out of his trunk… .creating this on the fly,  because what I was really interested in is that the play acting side of this Quixote is really putting on a show. And the musical theater (trope) is all in their imaginations.”

The musical is something of a legend. Based on Wasserman’s 1959 television drama, it became a highly theatrical piece that first played in the leaky temporary ANTA Washington Square Theatre in Greenwich Village on a stage that thrust deep into the audience like the downstairs venue in the current Gershwin Theatre in Manhattan.

The premise is that Cervantes, who was imprisoned in real life, awaits trial before the Spanish Inquisition. While in a common waiting room with a rogue’s gallery of murders, heretics, thieves, prostitutes and others, he stalls the rabble from confiscating the manuscript to his masterpiece-to-be by enlisting them in a theatrical impromptu recreation of the tale with Cervantes and his servant playing the parts of Quixote and Sancho.

The musical alternates between scenes from the book and interludes in the prison where the manuscript’s fate is always at risk. But at the heart of both is an uplifting paean to ideals and their transformative, soul-sustaining power in a life-denying world of cynicism, cruelty, tragedy and pain.

Its message came as the world was in flux. John F. Kennedy had been assassinated, an unthinkable and profound tragedy, the war in Vietnam was ramping up, the civil rights struggle had turned violent.

The original cast album became a beloved classic. But while subsequent productions have been appreciated, they rarely elicited the reaction of that first-run effort starring Richard Kiley and Joan Diener, directed by Diener’s husband, Albert Marre, and provided stunning choreography by the legendary Jack Cole. All had successful careers afterward, but nothing in their futures equaled this.

Ask almost anyone who saw it. Audiences were transfixed, transported and inspired to tears. Few productions have had that effect, least of all a truly and inexplicably misbegotten film version in 1972 directed by the great Arthur Hiller and starring Peter O‘Toole and Sophia Loren.

Linser enjoys a musical comedy as much as the next person. “People come to a musical expecting fluff and and flash and sparkle and all of that. I love a great production of The Producers,” but it’s not the type of work I’m interested in doing…that I gravitate toward. At the end of the day I want to be moved. I want to be touched. I want to be changed. When I walk out, the world looks different, the world feels different.”

Which is what he wants for the audience attending Man of La Mancha because he sees art being an integral part of the world around us and an agent for enlightenment and social change. He wants them to actively invest in the story, not just sit back and watch it passively. “I want to encourage them to be present…. We can’t afford to be complacent anymore, particularly with a story like this.”

His challenge to the audience “is to come in and interface with it differently than you might have expected to” with a traditional light musical comedy. “Allow yourself to get engaged rather than to step back from it.”

To that end, expect to enter the venue already occupied by the prisoners. Don’t be surprised if they wander into the aisles.

“What I really would like the feel to be is that the audience becomes prisoners with us in the prison. So it isn’t ‘us and them’, it’s ‘us’. We’re all here in this together. There will be breaking of the fourth wall. When Quixote is talking to the prisoners, he’s talking to us.”

“Because we are in a place in our society that is in desperate need of understanding and connection and being brought together…And the only thing that’s gonna bring us out of it is to dream that impossible dream. And we can do it. We just have to be willing to give over and allow it.”