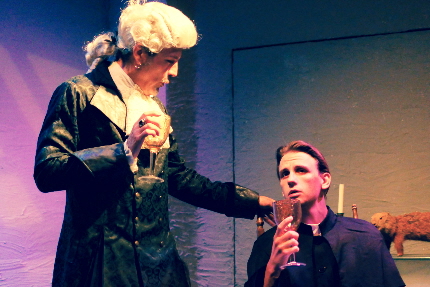 Dominick J. Daniel as the Marquis and Christian Cooper as Coulmier in Infinite Abyss’ Quills / Photos by Chris Bare

In 1999, Florida Stage’s production of Quills by Doug Wright (later to pen I Am My Own Wife) won five Carbonell Awards including best production of a play. This is crucial to remember as you watch Infinite Abyss’ revival of Wright’s bracing, excoriating script about the fruitless censorship of Art as well as the duality of Mankind’s nature, both seen through the prism of the Marquis de Sade.

If you’re one of the admirably earnest, intelligent and committed Infinite Abyss artists involved (or one of their friends or relatives), I suggest you stop reading here.

Because Infinite Abyss, which has produced some solid work like last season’s Extremities, just falls flat this time out. With the exception of the actor playing de Sade, the entire enterprise painfully reeks of amateurism. For instance, some performers act over the top, some seem somnambulant, sometimes it’s the same actor during the same scene.

Infinite Abyss Productions has championed visceral, feral works gleefully embracing violence, sex and gore in the tradition of Grand Guignol, Hammer horror films and the bloody cinema of Mario Bava. At the same time, most of their work strives for challenging intellectual content as well. So Quills was a logical choice of Abyss’ founder Erynn Dalton who directs here and co-founder Dominick J. Daniel who stars as de Sade. But it is a really difficult piece to pull off, suffused with a witches’ brew of broad satire, dark humor, tragedy, physical and emotional horror. So you have to admire their courage, but these folks just are not up to it.

Along the way, there is protracted male nudity, verbal obscenities and increasing violence as de Sade has, over a series of scenes, his tongue cut out and his extremities and privates hacked off (at least during blackouts).

The plot occurs near the end of de Sade’s life when he has been confined at an insane asylum in which the young Abbe de Coulmier (Christian Cooper) is trying to institute humane treatments, different than those akin to the Spanish Inquisition favored by his superior, the morally bankrupt Dr. Royer Collard (Greg Ward).

Coulmier hopes to reclaim de Sade who is continuing to write his infamous stories and smuggling them to the outside. De Sade believes his fiction is not meant to trigger readers to action so much as to promote that sex of any and all stripes is a legitimate and insuperable expression of human nature.

De Sade and Coulmier debate those merits while Collard presses Coulmier toward ever-more stringent tactics to curb the inmate’s output if not persuade him toward a philosophy more in line with social norms. But de Sade is not a likely candidate for redemption, relishing Wildean bon mots such as “Morality is a convenience” and “Chastity make a mockery of Man.”

It’s likely not giving much away that Coulmier unconsciously becomes his prisoner’s convert. He becomes the true monster, acting out what de Sade only imagines.

Frankly, what got this critic through nearly 2 ½ hours was listening to the script under the performance, the very thing that attracted Dalton and Daniel. Wright’s elevated language is nimble and literate (even a laundress speaks like she’s a refugee from Shakespeare). Challenging ideas, both stimulating and repulsive, whip around like a cyclone. Wright incisively explores the true nature of pornography, the hypocrisy of organized religion, the rational treatment of the mentally ill, and above all the ultimately doomed nature of censorship of Art.

The only actor somewhat equal to role is, thankfully, Daniel who exudes the playful charm of an adolescent taking pleasure that what he is doing is upsetting people. Further, Daniel communicates under that droll delivery de Sade’s genuine belief in the principles he glibly professes. With a silky cultured voice, he navigates Wright’s intentionally filigreed language like none of his colleagues, especially when reading aloud the tales like a storyteller with a rapt audience. He and Dalton love breaking the fourth wall, having de Sade physically touch whoever is sitting on the front row. And since he spends about half the show naked, some people will appreciate that he is quite good looking (although about 30 years too young for the part).

But another actor, after reading a de Sade effort, says dully, “Look at me, I’m awash in perspiration” but he looks and sounds zoned out. Another performer only appears twice, but enters at 9 on the 10-point emotional scale, graduates to 11, then dials back to 9.5.

The rest of the cast includes Siobhan Nolan as de Sade’s socially-ostracized wife, Constance Moreau as a laundress who loves reading his work to her blind mother, Kelly Johnson as Collard’s wife, and Anton Simone as an architect cuckolding Collard while designing a mansion for him.

Infinite Abyss’ aspirations are clear down to the lighting by Mike Graham which is atmospheric, but also leaves people in darkness, something that may be intentional since the same situation existed in the last show Love and Human Remains. Perhaps the most effective part of the production are the costume choices by Nicole Alcaro. Dalton also did the sound design which includes portentous horror film music between scenes and a headbanger’s anthem for the curtain call.

Look, artists, especially those bravely exploring the edges of an art form, have to be given permission to fail on occasion. This well-intentioned effort falls in that category.