GableStage’s Georgia McBride Is No Drag, Well, It Is, But…. 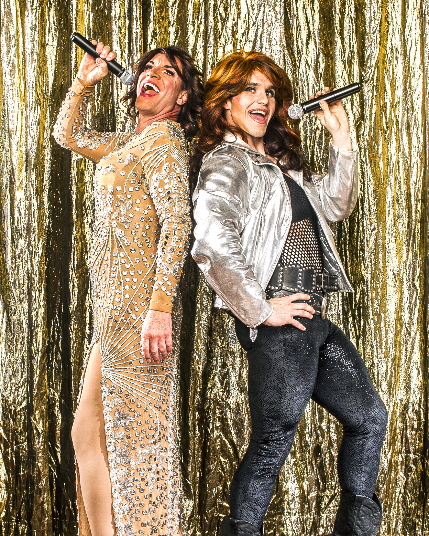 One pleasure watching a drag show regardless of your sexual orientation is the vicarious joy of seeing people uncorset their secreted urges and find the liberating self-worth to parade it publicly.

That is the unspoken strength underlying the delightful hoot of a comedy, The Legend of Georgia McBride at GableStage as a straight man, needing to make money for his family, abandons his failing Elvis impersonation act for burgeoning success as the titular drag persona.

As the Panama City country boy learns his new craft under the tutelage of a down-on-her-luck drag veteran, not only does his skill as a performer ripen, but so does his character. His revelation echoes Michael Dorsey in Tootsie who says, “I was a better man with you, as a woman… than I ever was with a woman, as a man.”

Casey (Clay Cartland) is the likable ne’er-do-well whose discovery of a love of performing in high school has led him to lipsyncing as a faux Elvis twitching on stage at a goat-roper bar, Cleo’s. But the act isn’t attracting customers, so the owner Eddie (Dave Corey) desperately replaces Casey with “Miss Tracy Mills” (Tom Wahl), his cousin at the end of her professional rope. In tow is colleague Miss Anorexia “Lexy” Nervosa (Sean Patrick Doyle).

Dead broke with a pregnant wife (Jade Wheeler), Casey reluctantly agrees to be a last minute replacement for the drunken Lexy by lipsyncing to an Edith Piaf number.

After that appearance, no surprise, Tracy schools the increasingly enthusiastic Casey who discovers an innate talent; he just hasn’t told his wife what he’s doing to bring home the cash. From there, you can pretty much write the script yourself.

But all this is barely secondary, almost tertiary to the real reason for the play’s existence and the real reason we’re exhorting you to take it in: an opportunity for a mainstream audience to revel in the gloriously outrageous performances of Cartland, Wahl and Doyle as they drive balls-to-the-wall in lipsynced turns to an array of numbers echoing icons from Judy Garland to Carmen Miranda.

Cartland, a mainstay in local musical theater, is renowned for his skill as an uninhibited physical comedian (The Toxic Avenger) who also fuses earnestness into acting performances to convince audiences that there is a relatable Everyman under the silliness (as in his human turning into a slug in The Trouble With Doug). Therefore, he is perfectly cast here, especially in his ability to depict Casey/Georgia’s skill growing from someone barely able to hobble in high heels and padded bra into a quite adept feminine creation.

He nails the funniest moment when Casey, hastily rechristened with the stage name Georgia McBride, goes out for the first time performing the Piaf number that Casey doesn’t know (not to mention he can’t speak French). So Tracy advises him just to use the drag default of steadily mouthing the words “watermelon motherf**ker. In Cartland’s hands – or mouth — this ludicrous ploy works marvelously.

Wahl has demonstrated his mastery of wacky comedy, such as the title character in An Act of God or pathos as the troubled father in After in the same season. But his drag performances are beyond just comical; he invests Tracy with weariness and hard-won pride from the vagaries of a life on a very rough road. While Casey’s Georgia is loving the joy of a performance he has constructed, Wahl creates a Tracy whose behavior is organic on and off stage. Tracy is not giving a performance; it’s who she is.

Doyle, a Miamian returning home after 2 ½ years in Broadway’s Kinky Boots, inhabits a near-caricature as a rail-thin perpetually bitchy queen with a razor mouth favoring such droll lines as, looking over the dressing room, “I’ve been raped in nicer places than this.” He also does a reasonably credible job as Casey’s Red State buddy and landlord. But it’s as “Rexy” that Doyle shines in the best speech in the play, a stirring 11 o’clock oration about how being a drag queen is not a voluntary choice without consequences, but a courageous statement of choosing to be who you know you are.

The script is solid enough by Matthew Lopez, but it’s lightyears from his scourging drama The Whipping Man produced widely across the country including the Caldwell Theatre in 2009. In retrospect, it’s really just an opportunity for these performances.

Julie Kleiner is best known as one of the best performers in the region for musicals, having nailed both Carousel at Actors’ Playhouse and Me and My Girl at the Maltz Jupiter Theatre in a single season. But she is also an experienced choreographer who applies those skills to creating ever more hilarious routines for her trio, helped by Doyle as dance captain.

The show provides an unparalleled opportunity for the preeminent designer Ellis Tillman to whip up an increasingly flamboyant parade of costumes from Tracy’s elegant ballgown to Georgia’s red white and blue Dolly Parton/Dale Evans outfit.

Set designer Lyle Baskin smoothly solves the quick switches between backstage and the performance area of Cleo’s by splitting the dressing room in half during performance scenes and bringing it together center stage for the offstage scenes.

Director Joseph Adler guides the entire effort in finding the heart as well as the witty one-liners, but he trusts his cast and choreographer to deliver the entertaining wackiness that has the audience clapping at the end of every number.

The Legend of Georgia McBride runs through June 25 at GableStage, 1200 Anastasia Ave., Coral Gables, inside the Biltmore Hotel. Performances generally at 8 p.m. Thursday-Saturday, 2 p.m. and 7 p.m. Sunday. Runs 90 minutes with no intermission. Tickets are $42-$60. For tickets and more information, call 305-445-1119 or visit GableStage.org

Backstage at Cleo’s with, from left, Clay Cartland, Sean Patrick Doyle, Tom Wahl and Dave Corey in the Legend of Georgia McBride at Gablestage