Island City’s Hir: How Do You Move Forward When You No Longer Know Where You Are 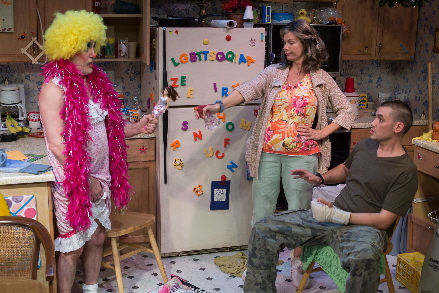 In this insanely uncertain world, the ever-changing standards and expectations of what life is or even should be make it nearly impossible to chart a path forward when we have less idea what might be ahead than Columbus.

That may be one of the takeaways – there are likely a half-dozen more — from the nightmarishly dark but hilarious 2014 comedy Hir bowing at Island City Stage.

Taylor Mac’s play fits into Island City’s mission of plays about the LGBTQ experience since one protagonist, 17-year-old Max, is becoming transgendered. Max is insisting everyone in the family use the newly-minted “hir” as a pronoun replacement for “him” and “her,” and “ze” for “he” or “she.”

And indeed, the mainstream’s disorientation over the brave new world of reassessing sexual identities is a major part of the play. But it’s arguable that this too-long-delayed-acknowledgement is only one illustration of a 21st Century society that has morphed so quickly during the past decade that few people can get their bearings. The central problem is that you have to know where you are before you can go forth into the future — the clearly stated desire of the ultra-chaotic Connor family.

In the toughest job in the production, director Andy Rogow finds exactly the groove of hilarity and darkness in this outrageously absurdist comedy, and elicited yet another landmark performance from Mia Matthews as an indefatigably (nay, insanely) cheery mother at its center.

A weary Isaac (Daniel Capote) has returned home, dishonorably discharged from the Marines after too much drug use during his three tours retrieving body parts from battlefields overseas.

In the family’s modest home, in a subdivision knowingly built on a landfill, Isaac finds his father Arnold (Larry Buzzeo). He’s formerly a domestically abusive racist plumber who had pursued the American Dream with limited success but with a mania for strictly controlled behavior and an orderly home. Unknown to Isaac, a stroke left him a helpless lump blubbering nonsense.

Isaac’s sister Max (Jacob Michael) has been undergoing transgendering treatment – to the point that she/he/ze is growing a stubble. Also a surprise to Isaac.

Finally, there is the mother Paige who presumably was a classic suburban blue-collar hausfrau when Isaac left – a life she later describes as “a person who dusts collectible plates from Reno.”

But those are the least of the surprises.

Freed from Arnold’s domination by the stroke, Paige has joyously let go adherence to anything like limiting norms. Virtually every traditional concept has been tossed away with a decided delight that has to be seen to be fully appreciated.

For fun and revenge, she dresses Arnold in a nightgown, then paints his face with clown makeup. The living room is strewn with clothing and objects simply dropped wherever when they were no longer needed for that moment. Not necessarily the sharpest knife in the drawer but voraciously seeking a new life, Paige has aggressively investigated and adopted scores of New Age philosophies and causes from Google. She’s adopted trendy phrases and a new vocabulary. Trying to organize a family outing to a museum, she tells Isaac,” We love art.” He replies in confusion, “We’ve never liked art.”

She merrily jokes about Max’s regimen of hormones: “I credit the Cheetos. How could we feed our children fluorescent food and not expect a little gender confluence?”

Tellingly, her favorite phrase seems to be the oft-shouted “Paradigm shift,” something she likely hadn’t heard until a few months ago but which she brandishes proudly with the fervor of the newly-converted.

And that indeed is the point. Isaac has come “home” to a world turned inside out.  Yet he and everyone else has a definite drive to move forward “into the future,” as Max and Paige frequently say. The catch is how and where and what. Max has a vague idea of running away to an anarchist commune somewhere to become a gender reassignment historian. Paige really has no concrete idea at all as she samples a score of options at the same time. Isaac has no idea what to make of things and tries to restore order, but to no avail. The anarchy spins in ever wilder circles including a “therapeutic” shadow puppet play set up in the kitchen to illustrate Arnold’s betrayal of the marriage long ago.

Mac’s script, with faint echoes of David Rabe and Christopher Durang, relishes this craziness and “ze” provides plentiful insights into the LGBTQ world. But underneath Mac captures a more society-wide lost and lonely zeitgeist. In a rare moment of genuine compassion for someone else, Paige says to the upset Isaac: “Sometimes you spend an entire lifetime preparing for something to be one way and right from the start it’s another.”

Without a narrative strand, the play goes on just a little too long for such a discomforting situation. Mac adds in several needless but amusing scenes such as Max trying to play a banjo. But Mac’s whip-smart dialogue contains scores and scores of sadly true observations about life today.

Capote makes a believable prodigal son aghast at what has happened when Isaac was hoping his family would provide a reliable launch pad for his reinvention. Michael does not shy from Max’s almost nasty teenage rejection from his family and Buzzeo provides much of the humor as the mind-blasted father.

This cast under Rogow embraces the madness unreservedly, but no one does it more smoothly, expertly and convincingly than Matthews. For instance, when Arnold plays with his genitals, apparently a habit now, Paige is talking to one of the kids. She yanks out a bottle of water and sprays her husband in admonition without even looking at him or interrupting her conversation with the siblings. It’s a funny bit, but it’s Matthews’ blithe execution that makes it a hoot.

In recent years, Matthews has demonstrated a wide range. She won a Carbonell Award for her upper middle class sophisticated blond beauty in Zoetic Stage’s scorching drama After. Paige is the other end of the spectrum. Here she wears a garish outfit with unflattering makeup and dishwater dark hair streaked with grey – all perfectly fitting the character that she, Rogow and Mac have constructed.

Scenic designer Jodi Dellaventura has become ever more prominent with such works as her Carbonell-winning design for The Nether last season. But much of her experience has been as a prop master and set dresser, and it is that talent shines here (with the help of Natalie Tavares). Her array of working class detritus is wacky and kitschy, strung out as if a tornado had hit the home and escaped out the window. From the ridiculous wall hangings to the collection of children’s cookie jars shaped in fantasy characters to the mismatched furniture to skeins of yarns stored in an underused dishwasher. We could go on and on.

A last warning: If everyone in Hir is or was hoping for a better future – Isaac keeps saying ‘We have to do better’ – this is a tragedy and nightmares don’t usually have a happy ending.