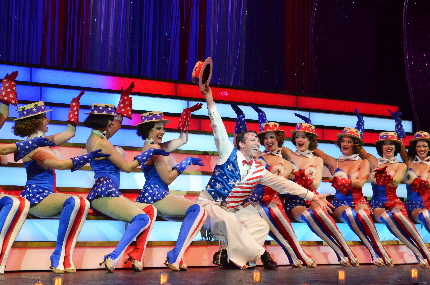 While the sound and fury of the Republican debate signifying nothing was raging Thursday night in South Carolina, the spirit of an unassuming man who truly represented American values was delighting an opening night audience at the Maltz Jupiter Theatre’s The Will Rogers Follies.

But much of the social-political teasing that Rogers lazily unreeled for the audience resonates today with deafening roar that is as much rebuke for our lack of progress as it is a gentle ribbing about eternal foibles of human nature. That was part of the show’s wry appeal when it bowed in 1991, but it’s a bit discomfiting to be amused by that same paradigm a quarter-century later.

This pull-out-the-stops revival is about as lush and entertaining a rendition as anyone could hope for with the musical that debatably beat out Miss Saigon for the Tony Award.

But the news is that Maltz favorite Matt Loehr has returned in title role. We get more than a charismatic folksy Will Rogers commenting from the sidelines, but one who can dance up a tornado alongside the most talented members of the chorus line – thereby rocketing up the energy and the pizzazz level.

Still, the virtues of director Mark Martino’s joyous edition go far beyond being blessed with the irrepressible Loehr. He is matched in high wattage by the lovely Laura Hodos as Will’s loving, long-suffering wife, Betty. The endlessly inventive choreography is matchlessly designed and performed, Helen Gregory’s razzamatazz band is dead perfect, and the production values are impressive starting with hundreds of lavish Follies-style costumes rented from around the country and built in-house under the supervision of Gail Boldoni.

The raw material was produced by a confluence of some of the most talented folks at the time: engaging music by the master Cy Coleman, deliciously witty lyrics by Betty Comden and Adolph Green, and a book by Peter Stone that seems to be straightforward entertainment but actually slips in implicit messages underneath. All of it was originally overseen by Tommy Tune.

The premise is that Rogers’ is retelling his life in a luxuriant Ziegfeld Follies of the ‘30s complete with massive production numbers of showgirls clad in little or in stunning costumes. The Oklahoma-born poet lariat performs his monologues while twirling a rope or riffing wry observations based on the current day’s newspaper. (“Every time Congress makes a law, it’s a joke, and every time they make a joke, it’s a law.”) The audience is awash in love songs, torchy ballads and considerable tap dancing.

The musical is a fantasy in which Rogers is dead and tells us often that he will die in a plane crash. Ziegfeld, also dead, is a disembodied god-like voice, coming over the loudspeakers changing facts to be more theatrical and entertaining. He moves Will and Betty’s first prosaic meeting at an Oolagah, Oklahoma railway office to the surface of the moon because it’s more showbizzy spectacular. The whole show is similarly unabashedly sparkle dust and hype.

Ziegfeld insists that Rogers’ fancy wedding with a stage-wide bridal train and a dozen showgirl bridesmaids be displayed out of chronological order. It needs to come at the end of the first act because that’s when wedding numbers always occur in Ziegfeld’s shows.

The show frequently breaks the fourth wall and steadfastly ignores any pretense that they are not putting on a show in 2016. The show drops in truckloads of biographical exposition without shame, even highlighting that they are doing it. At one point, Betty asks, “Will, do you know that in the last year you have…” and she reels off a prodigious laundry list of achievements. Will says, “Well, I know that.” Then she smiles at the audience says, “Well, sure, you know, but they don’t.

Some jokes have been updated (“Obama and Biden go golfing. Biden’s handicap is 20, Obama’s is Biden.”) and Loehr inserted what seem like ad libs but are likely well-practiced references to Chipolte, long lines at the women’s restroom and latecomers to the Maltz entering with walkers.

It’s delightfully daft that way. It rarely gets caught taking itself seriously. Yet Rogers’ observations still are painfully relevant. A thoughtful audience member might reflect that Rogers’ affable philosophy (“I never met a man I didn’t like”), his genuine desire to see people from three dimensions, his non-confrontational way of criticizing human frailty, all of this is sadly lacking in the current atmosphere of division and discord. He is the exemplar of the American Character that we were once upon a time, or we hoped we were, or at least we wanted to be.

None of this would work without Loehr, a born-too-late song-and-dance man who won local hearts and Carbonells for Crazy For You, The Music Man and Hello, Dolly! He sings better than you realize and his dancing is mesmerizing. With a huge grin, a cowlick and an incessantly chewing jaw, he even looks a bit like Rogers. But his real asset is the joy that emanates from his eyes, his mouth, his body, everything about him.

His acting skills go beyond light humor. President Hoover asks Rogers to give an uplifting radio address during the depths of Great Depression. Stone wrote a sad, slow lament including a plea for Americans to help those less fortunate. It included a profound puzzlement at how “the difference between our rich and our poor grows greater every year.” Loehr handles this long speech credibly with as much gravitas as when he jokes about how human beings are not descended from apes, but lawyers.

Hodos, just nominated for a Carbonell for her work in Actors’ Playhouse’s The Toxic Avenger, proves for the umpteenth time that she is one of the best musical theater performers in the state. With that blazing personality and clarion voice, she conjures Ethel Merman’s force of nature vivacity — although Hodos is much prettier and a better singer as she proves in the torch song, “No Man Left For Me.”

A tip of the straw boater, too, to James Young as Rogers’ crusty father and Elise Kinnon as Ziegfeld’s chief leggy showgirl (and Martino’s associate director).

But if there’s another star of the show, it’s the work by twice Carbonell-winning choreographer Shea Sullivan (The Music Man and Crazy For You) and associate Dennis O’Bannion for expertly encompassing virtually every vaudevillian step and trope. From the pounding tap dancing in the opening number to the chorines seated minstrel-style with intricately kicking legs and tambourine hats, it’s both original work and a faithful homage.

Visually, the set is dominated by a nine-step stage-wide stairway with LED strips so that each step lights up in whatever colors and patterns are needed including an American flag. The steps are washed in a kaleidoscope of lighting effects and projections.

And those costumes are stunning, from showgirls wearing pinto-patterned chaps to feathered headdresses to spangled runway-worthy designs of pure fantasy.

This Follies as a whole is droll, charming, diverting, even thoughtful. That’s entertainment.