What Happens When You Get What You Asked For: Zoetic Stage’s Rapture, Blister, Burn 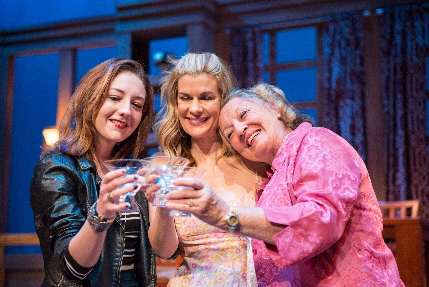 Gina Gionfriddo’s incisive Rapture, Blister, Burn is rooted in an wry examination of post-feminism — what happened after feminism succeeded in ripping out many if not all of the heinous social obstacles of the past.

But Zoetic Stage’s finely wrought comedy-drama goes much farther and deeper in examining the complex interrelationship of dreams, choices, responsibilities and consequences applicable to human beings of all sexes.

The second are alternating scenes of interpersonal relationships played out slowly and gingerly with Pinter-like pauses by lost troubled people trying to cope with the fallout of their decisions.

High praise is due Gionfriddo, director Stuart Meltzer and a superb five-member cast for persuasively and deftly melding these together and making each believable. The result is thought-provoking, moving and suffused with the dark humor of whip-smart people who got what they wanted and now question whether it was what they really wanted or what they should have wanted – a kind of emotional and social version of buyer’s remorse.

The 2013 Pulitzer finalist posits a reunion of three college friends 21 years later. Catherine (Mia Matthews) is a brilliant analyst-writer about social issues who has built a high-profile career, but has foregone a conventional family life. Her ex-roommate Gwen (Margery Lowe) is an open-hearted convention-bound stay-at-home mother who dropped out of college and abandoned her dreams of a challenging future. Gwen married Catherine’s soulmate Don (Todd Allen Durkin on opening week and now Stephen G. Anthony), a once-promising ne’er-do-well who has become a college administrator and given up teaching or writing.

Catherine, who has been out of touch most of these years, has returned home to the trio’s New England town ostensibly to care for her mother (Barbara Bradshaw) who has suffered a heart attack but remains pretty feisty with a desire to be independent.

Don gets Catherine a job teaching at his college, but she needs something this summer to keep her mind alive, so he arranges for her to run a seminar on feminism in her home. In the sole contrived part of the play, it attracts only two students: Gwen and 21-year-old Avery (Lexi Langs), an up-to-the-millisecond denizen of the current generation.

Fueled by a considerable flow of martinis (other than Gwen who is a recovering alcoholic), the three women dive into a series of seminar discussions about feminism. Avery is a fascinating character. She has no connection with the visceral sacrifices that past generations made to provide Gwen and Catherine their options. That allows her to blithely slice through the myths and rationalizations that have accumulated around the feminist movement. With scalpel-like clarity, she bemusedly deconstructs feminism as quaintly foreign as artifacts found on an archeologist’s visit to a primitive culture. The past has little relevance to how she will live in the present and future. It’s doubtful she knows who Minneapolis’ Mary Richards was.

It would take numerous paragraphs to adequately encompass these debates, but they touch on an ocean-wide array of topics ranging from marital politics to porn. The three debaters (plus Mom as a frequent interloper) send ideas clashing, spinning and turning them on their heads under cross-examination. For instance, discussing slasher movies, one person reiterates that the movies are men vicariously punishing women victims for their new-found independence, unless some man rescues them in the last reel. But another woman argues that the last survivor in the last frame of most films is a woman who has defeated or at least survived every monster due to her own skill, courage and hardiness.

Rapture is not intellectually meaty; it’s a nine-course gourmet banquet. It’s almost too much. Many patrons are going to feel overwhelmed and even left behind by the seminar scenes with their white water torrent of ideas. But to criticize Gionfriddo for such an inundation would be like the emperor complaining that Mozart’s opera has “too many notes.” One of the achievements of Meltzer and the cast is how they usually keep these scenes from being visually and aurally static.

This isn’t a bloodless academic exercise to the protagonists or us because these ideas are clearly expressions of their life experiences, and because Gionfriddo illustrates the consequences that these philosophies have had on their lives.

As far as the acting corps, it is fair to say that each part falls as solidly as possible in each performer’s familiar wheelhouse; it’s a very well-cast show. But that is an asset. Instead of the actors having to waste rehearsal searching for the basic outlines of their characters, they can delve as deeply as they ever have into the complex molecular structure of these people. The result is supremely truthful and multi-dimensional portraits. If you’re not a professional theater person, you might not appreciate just how deft these performances are.

It would take twice the space to justifiably analyze the work of each actor, but suffice it to say that all five under Meltzer’s hand deliver dizzying skillful, detailed moment-by-moment work that seem as if they are not working at all, just being. It’s a major accomplishment just to keep the energy alive in the debate scenes so that befuddled audiences members are still kept involved in the play.

As always, Meltzer’s pacing, staging and emotional sculpting of the actors mark him as one of the region’s best. Plus, the creative and technical team starting with Michael McKeever’s stylish set design is top of the class.

A final shoutout goes to Zoetic’s determined but affable attempt to get people to turn off their cellphones with a personable plea from one of the company’s Young Artists program, in this case, Sheri L. Wieseman.

Rapture, Blister, Burn stands as the kind of work that makes you grateful to be a patron in the South Florida theatrical community.

Rapture, Blister, Burn from Zoetic Stage as part of the Theater Up Close series performs through Jan. 31 in the Carnival Studio Theater at the Arsht Center’s Ziff Ballet Opera House, 1300 Biscayne Boulevard, Miami. Performances are at 7:30 p.m. Wednesday-Saturday, 4 p.m. Sunday. Tickets are $50-$55. Running time is 2 hours 25 minutes with one intermission. (305) 949-6722 or www.arshtcenter.org.