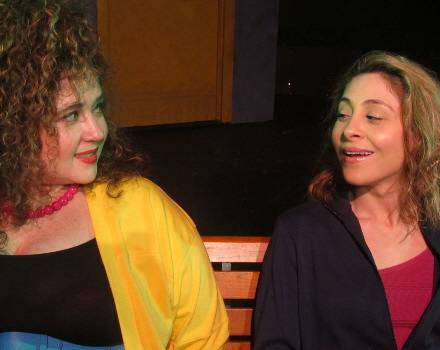 Taking a play that could easily be average and creating an inspired work is a thing of theater beauty. It comes from a director’s ability to envision what they want and go full in and, then it’s having actors who can help to further that vision. When there’s that synergy, it’s like watching magic unfold onstage.

Wendy Hammond’s play Julie Johnson is delightful, the story of a Hoboken housewife who goes against the grain and breaks out of her mold. She returns to school as an adult student because she “don’t wanna be stupid anymore,” kicks her abusive husband out of their apartment, and falls in love with her best friend, Claire. The drawbacks of Julie Johnson is that elements of Hammond’s story make it rife with predictability, yet Kim Ehly and her Kutumba Theatre Project cast manage surprises around every turn.

There aren’t many plays out there to pick from that have a lesbian theme (let me be more succinct – there aren’t very many good plays out there), especially those that feature characters which, regardless of their sexuality, are across-the-board relatable as they struggle with issues of acceptance and love. But Ehly’s insightful direction steers clear of making Julie a “gay play,” instead neatly keeping the focus on character and emotion. It helps that her two lead actresses, Valentina Izarra as Julie Johnson, and Casey Dressler as Claire, embrace their roles with a refreshingly tender abandon as they struggle in their search for identity.

Hammond wrote her play in the 1990s and the script calls for it to be set in The Present, but to give it more of a sense of place, Ehly roots the play in 1989. A late ’80s pop soundtrack sets the tone (they should’ve sold a Julie Johnson compilation in the lobby a la Starbucks; I would’ve bought it), with Melissa Etheridge, Madonna, Heart, Cyndi Lauper, Hall & Oates, Pat Benatar, as mood music in between scenes. Blackouts are a bit long, which does allow for the music to seep in, yet not oversaturated, but the long pauses also seem to conflict with the rapid momentum of the piece. (It’s difficult to decipher whether this was an opening technical bump or purposeful placement.) The ’80s flashback continues in the costuming — Julie Johnson’s comfy clothes are Stray Cats and Pretenders t-shirts, while Claire’s ensemble is blatantly Material Girl-inspired.

Izarra, whose program bio says she studied Shakespeare at the Royal Academy of Dramatic Arts in London, doesn’t have an ounce of pretentiousness in her genuine Jersey girl portrayal. One minute, she’s frenetically unearthing Scientific American magazines hidden under her couch like X-rated magazines, the next minute she’s chain smoking and maniacally culling the want ads for jobs, while in another quick breath, she’s misty eyed as she wants to become suitor to her best girl friend. When she describes Claire as tasting like “Sprite without the bubbles,” Izarra conjures sensuality with a simple girlish grin. When Julie suffers heartbreak, there’s a collective sigh as the audience gets swept away by the actress’s earnest approach.
The best moments are between Izarra and Dressler as they weave in and out of each other’s emotional highs and lows. And Dressler’s When Harry Met Sally, I’ll Have What She’s Having park bench moment is sheer delight.

The play casts teen actresses as Julie’s young daughters, Lisa (Skylar Voelker) and her sister, Frankie (Julianna Rector).  The roles prove challenging since both girls have parts that require a broad range, unlike usual kid parts that are thinly drawn. Ehly probably could’ve fudged these roles by casting more experienced, older actresses, but kudos to her for keeping them true to age.

Doug Wetzel as Mr. Miranda plays the computer science teacher low key and unassuming. Wetzel’s Miranda has some of the most interesting dialogue as it intersects with the chaos and sparks that create the tornado in Julie Johnson’s life. Rather than playing these passages “by the book,” bringing out these nuances would have created an interesting layer.

Julie Johnson’s minor flaws are outweighed by Ehly and Company’s deep commitment to the play and the director’s vision. In a recent interview with Florida Theater on Stage, Ehly said she was immediately drawn to Julie Johnson when she first saw it when it was performed at the Humana Festival in Kentucky in 1994. She also portrayed the title character twice, once in 1998 in a production at Florida Playwright’s Theatre in Hollywood, and in 2006 in Sol Theatre’s production in Fort Lauderdale.

The chances she takes as director and the choices she allows her actors to make — from the ’80s inspiration to how the characters interact — give Julie Johnson the jolt it needs to outshine its own predictability and elevate its status to genuine originality.