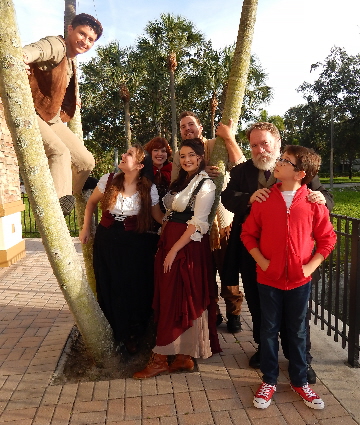 Director Jessie Hoffman has re-imagined the musical from the narrator’s perspective. That character, who in this production is a 12-year-old boy, plays a larger role than in other mountings.

But to her credit, Hoffman has otherwise kept intact the familiar characters and Stephen Sondheim’s music and lyrics as well as James Lapine’s book.
This is mostly the same Into the Woods with which you’re familiar. But in this production, it’s also a musical that vividly reflects our uncertain and frightening world.

These days, children may not feel secure in places they previously felt safe. During years past, they lived a normal childhood. They laughed, learned and played with their peers without worrying. School shootings have changed that. Indeed, children will listen — to news reports. They might also feel that they must periodically look over their shoulder.

In addition, youngsters might have nightmares, hence Hoffman’s approach. The show begins with the boy having an argument with his dad (unseen but heard). The youngster then escapes home and, panting, enters the woods.

Once there, he becomes the musical’s narrator, trying to entertain himself (and us) by relating the tale of the intertwining Brothers Grimm and Charles Perrault fairy tale characters.

Each strongly wants something. At least by the end of the first act, they seemingly are poised to live happily ever after.

Then the boy goes to sleep. In the second act, the characters have supposedly received everything that they desired. But they’re still not content. Their actions provoke a livid giantess (an unseen Laura Morris, with a menacing voice), who directly or indirectly kills several characters. Finger-pointing ensues. That is, until the survivors stop the blame game, take responsibility for their actions and work together to solve their literally huge dilemma.

Speaking of size and scope, the aforementioned is a brief summary. This mash-up of fairy tales is chock-full of deep symbolism and a heavy-handed plot.

But considering that this is just Lightning Bolt’s third production, credit must go to the company. Hoffman and her team deserve kudos for even attempting this complex musical, complete with Sondheim’s difficult music.

They’ve not only tried, but largely succeeded in clearly and robustly singing the legendary composer/lyricist’s intricate harmonies and clever but challenging solos. Even more impressive, cast members capture the emotion behind the words. They offer multi-faceted performances of emotional depth and nuance, although their microphones fail them at times. They also must do a better job at waiting for applause following a scene or song to finish before resuming.

Throughout the production, one senses an almost hyperventilating, heart-pounding urgency as these characters breathlessly rush to fulfill their wishes.

Musical director Phil Hinton uses jarring underscoring to reinforce the unsettling mood. Meanwhile, Andrew Shultz’ harsh, varied lighting and fog further add to the effect. Unfortunately, several light cues were late during the reviewed performance, particularly for the narrator. The technical crew needs to fix this. In Lightning Bolt’s production, the narrator is one of the leading figures in what is otherwise a musical relying on a strong ensemble.

In a show about the importance of working together, this cast coalesces into exactly that. But the individual performances are equally effective, thanks to Hoffman’s detailed direction and smart staging.

For instance, Giustino Garcia as the young narrator moves around frequently and changes his position multiple times, resulting in variety.

As he narrates, Garcia speaks in a strong, clear voice. It’s one that betrays a frank manner that fits the seriousness of the piece. In addition, he conveys convincing panic as the other characters seem poised to hand him over to the giantess. Mostly, he offers a performance that matches the quality of the older, more experienced performers.

Among them, there are many standouts.

Hoffman handles double duty, not only directing, but playing Cinderella. She imbues the familiar waif with a stubborn, fearless drive, while also conveying a carefree, youthful demeanor.

While Hoffman and her castmates mostly excel in their roles, Renee Elizabeth Turner shines as the witch whose cures throws the characters into turmoil.
With intense, wide eyes, a sing-songy, sarcastic, mocking voice and sudden tonal changes, Turner gives us an unpredictable, menacing hag. But director Hoffman and Turner realize that this “witch” isn’t completely evil.

Sure, she’s locked her daughter, Rapunzel, away from the outside world. However, she’s terrified of what that dangerous world might do to her beloved daughter. Turner makes us recoil at this woman’s meanness, but she also makes you sympathize with this well-meaning, yet over-protective mother. It’s a part of her to which many can relate.

Turner shows her versatility. She growls at times and when she sings her lowest notes, we hear sincere anger and grave warning. In the upper register, Turner’s voice soars and her mocking, high-pitched laugh is comical, with dark undertones.

Meanwhile, Irma Gloria possesses a sweet voice as Rapunzel. Gloria endows the character with a yearning that makes you feel for this youn g woman.

One also can’t help but sympathize with Jack, of beanstalk fame.Elijah R. Pearson-Martinez sincerely plays him as a well-meaning, loving lad who adores his beloved cow, Milky-White (an adorable, tiny Caden Marino). Pearson-Martinez’s highlight is his solo, “Giants in the Sky.” He sings with a wide-eyed, dramatic wonder and an intensity that keeps you riveted on him during the number. That’s not to say Pearson-Martinez’ Jack is perfect (who is?) He is, at times, petulant and at odds with his folks (a harried Maxwell Miller as the Baker and a determined Savannah Marino as his mother).

While the cast is too large to single out each member, all sing and act convincingly and with urgency to fulfill their characters’ wishes.

But there are consequences to being greedy, and that’s one of this musical’s take-aways. So, too, is the importance of taking responsibility for one’s actions and contributing to one’s community.

Then there’s the disconnect between parents and children, which is also one of the bigger themes. In Hoffman’s approach, she introduces it from the beginning when the boy argues with his father and escapes into the woods.

The woods is a character unto itself in this show. It’s frightening, dark, foreboding and stands for many things. A trek through it can symbolize one’s journey from innocence to understanding, from apathy to involvement and sympathy.  The woods can serve as a metaphor for someone being in danger or sick – or even experiencing a nightmare.

But Into the Woods also has a healing quality. It’s about realizing that, as part of a community, “No One is Alone,” as goes the song, sung tenderly here.

When the boy awakens, his father has come looking for him. Father and son are happily reunited. He starts telling the youngster a story.

We find ourselves hoping he tells him the right things.

After all, children will listen.

This entry was posted in Performances, Reviews and tagged Into The Woods, Jessie Hoffman, Lightning Bolt Productions, Renee Elizabeth Turner. Bookmark the permalink.