Like the Jersey Boys Sang, ‘Oh, What A Night’ at the Maltz 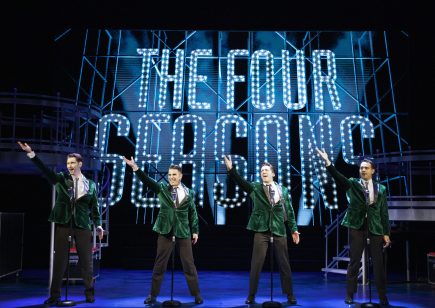 Much of the audience at the Maltz Jupiter Theatre’s opening night of Jersey Boys was its traditional well-heeled well-coiffed senior citizen crowd. But their increasingly unfettered applause, then cheers, then standing ovation while clapping to their music reflected a specific message:

“It mattered! See, we told you. Our time, our music, our youth mattered. Here it is 50 years later and somebody wrote a Broadway musical about it.”

Not that anyone of any age likely will resist the tale of the rising fame of iconic Four Seasons and then their tragic disintegration with considerable personal cost to its founders. The narrative is skillfully woven into an array of classic top 40 hits that this audience grew up on, dated, possibly got married to, notable for its infectious spin.

But what elevates this far beyond a jukebox musical like that one by the Swedish group, what’s special is its clear-eyed warts-and-all biography ingeniously told through the four individual members’ consecutive accounts that intentionally do not align perfectly—unreliable narrators delivering Rashomon looks back.

Admirably, Rick Elice and Marshall Brickman’s book never shies from what the group’s publicity staff never allowed to go public: a massive gambling debt, connections to the mob, alcoholism, sexism, acrimony, a side deal, broken marriages, greed, egos, prison terms in their youth for burglaries, and intense rivalries that eventually broke the group apart. And yet under it all, running through it all, is the sense of frayed loyalty to a time when they were singing do-wop in close teamwork under a Jersey streetlight in the 1950s.

The evening ends with the group’s glorious performance at their 1990 induction into the Rock and Roll Hall of Fame, but even then, the four offer epilogs with asterisks that violate any sense of a fairy tale ending. “None of us are saints,” one offers dryly.

Of course, by that time, the audience of early Boomers and their parents are bought and paid for as the group in stunning black sparking tuxes slam out “Who Loves You.”

Powered by their hits and lesser-known character-revealing esoteric songs beautifully resurrected in this production, Jersey Boys has been an amazingly popular show for those of a certain age since 2004 – sort of like Wicked and Dear Evan Hansen in that fans come back to see it over and over, bringing their skeptical children and grandchildren who are won over by intermission.

But this is the Maltz Jupiter Theatre and returning director/choreographer Marcia Milgrom Dodge once again delivers a familiar title reimagined from scratch to give it a freshness that even it diehard fans will welcome.

The costumes, sets and lighting are different from the original production and national tour (no red jackets), certainly, but there is an impossible to quite nail down difference that makes it worth seeing once again.

The most noticeable variance is that the original and the tours drive through the evening like a runaway freight train of speed and energy. This production moves firmly and solidly without any lagging, but without that headlong power. Also, while no one underplays those dark threads, they never burst through the feel good aura of this production, which is a hair problematic. You can almost hear the production – and therefore the audience – saying, “Yeah, so what that DeVito owed the sharks a million bucks?”

Of course, the keystone here are the actors who bring distinct personalities that had to be melded into one seamless whole. (Granted, Jersey accents come and go.)

Matthew Schatz is the proud, handsome, trouble-prone Tommy DeVito who founded the group but succumbs to various sins early on. Jason Michael Evans plays bassist and the most level-headed of the group Nick Massi. Quinn Corcoran is especially effective as Bob Gaudio the keyboardist and composer who arguably was the talent core of the group. 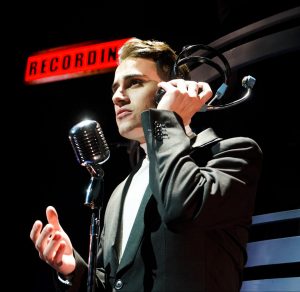 And, of course, there’s Joshua Charles Skurnik as Frankie Valli. It’s not simply that he has mastered Valli’s falsetto and nasal delivery. It’s that he convincingly tracks Valli from a shy teenager through the vagaries of fame and then ending up an adult chastened by his shortcomings and failure despite a record-setting career.  Skurnik was Marius in Les Misérables and Perchick in Fiddler on the Roof at the Maltz. He has that magnetism and charisma that grows and grows until he owns the audience including the woman in the front row who stood while he was singing one number.

Just as laudable, music director Eric Alsford leads a spot on nine-member band off stage that is almost aways playing underpinning throughout the evening. But he has molded the cast in the precise subtly complex vocal arrangements. People won’t notice, but the arrangements depend on the audience’s recognition. Only a few are played from beginning to end. Others get the required recognizable introduction phrases, a verse and a chorus and then it slides into a dialogue scene.

Milgrom Dodge ensures that the group’s movements are period perfect and she adds grace notes like a short dance by Valli’s daughter—now dead from drugs – swirling as he sits shattered and sings “Fallen Angel.”

And she brings that visual sense to her staging such as when Valli is singing “Too Good To Be True.” She has the entire ensemble in tuxes in a horizontal line behind him, miming playing brass and gyrating to the music.

And one of the penultimate images is stunning when the group is at the Hall of Fame show, lit in stark silhouette atop stairs bent into stylized poses of performing.

All of these moments are the efforts of a group molded by Milgram Dodge including Rob Denton’s lighting, Mika Eubanks, costume design, Matt Kraus’ strong sound (a few slow cues opening night), Chen-Wei Liao’s scenic design and notably, using the company’s new LED screens, Steven Royal’s projections that range from lounges to towering cityscapes to a wall of their record covers.

Throughout, all of them get to spend about 13 seconds off stage changing accents and costumes with help of an indefatigable backstage crew.

The plan had been to open the show in January 2021 in a stage built inside the Roger Dean Chevrolet baseball stadium in Jupiter because the company’s massive expansion of its venue was still underway. Then supply chain and manpower problems scrapped that plan.

With the sardonic street level humor, period references to John Glenn and Topo Gigio, the flash of the visuals on stage, the charismatic quartet and the superbly recreated score, there’s a welcome resonance when the show launches into “What A Night!”

Read an interview with Marcia Milgrom Dodge at https://tinyurl.com/4wsv5acw