Lost And Adrift In The ‘Hood: The Mighty Gents At AHCAC 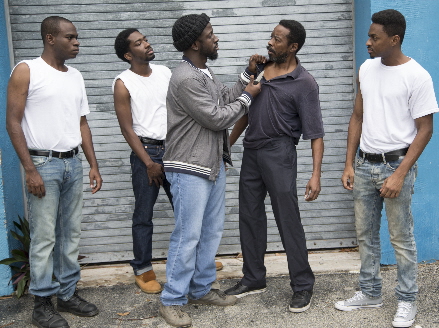 Two archetypes: high school football champs who never again reach that pinnacle of accomplishment and respect; and the never-was Willy Lomans who realize too late that every belief that they built their lives upon has been false, unreliable, empty.

Those seemingly warring tropes are melded in The Mighty Gents, a poignant moving tale worthy of a Greek tragedy except that the protagonists are members of a street gang from the mid-1960s, emotionally, economically and sociologically lost in a Newark ghetto in 1978.

The African Heritage Cultural Arts Center’s production of Richard Wesley’s drama is never intellectually facile, but instead imbued with the melancholy of a glory unreclaimable amid a death spiral of paralyzing failure.

The naturalistic street slang and rhythms contain flights of lyricism often found in August Wilson’s work. The characters are desperate disaffected inner city denizens akin to those found in The Wire. But their youth is a decade behind them. Unwilling to purvey drugs, they no longer have a power base from which to rule; brute physical force no longer trumps organized crime and weaponry. Because this is theater not strict naturalism, Wesley gives characters monologues of self-justification intentionally delivered to the audience, arias that reveal complex, layered interior lives of unsatisfied yearnings for a better life.

The Mighty Gents were violent street toughs during the mid-to-late 60s who drove out a rival gang from a central Newark neighborhood and then reigned as the unchallenged kings of their turf with all the attendant adulation and respect.

But ten years later, the world has passed by the four not yet imprisoned or dead. “The earth used to tremble when we walked the streets,” one says. But another observes, “Census don’t count us, welfare don’t know us.”

One came back from Vietnam with a damaged leg. One has “married” the same woman three times. One won’t return to the family home in the deep south until he can go back a success. They still hang out on street corners enviously remarking on passing BMWs and successful neighbors who have built a life. In a telling insight, this production brightens up scene changes with ’60s R&B tunes that are no doubt the soundtrack running in the heroes’ heads when the prevailing music was likely early disco.

They fantasize quixotically of wealth and respect, but they know that they have not a clue how to achieve it; everything they learned on the streets about knives, fists and macho posturing has yielded nothing. “That was back in the day when I was immortal,” one says. These are people, every one bearing deep scars, who are still searching for “who they are” to arrive. They know this isn’t it.

Eventually, driven to desperation, they try one last get rich score. As with all tragedies, the outcome is pre-ordained.

The production empathetically directed by the veteran John Pryor is startlingly effective. Even though the quality of performances ranges wildly, Wesley’s superb script is a compassionate but clear-eyed elegy for mistaken choices and an almost Darwinian succession of survival of the fittest. At one point, Frankie, the Gents’ leader, dismissively rebuffs Zeke, a neighborhood drunk who is only in his 50s but has followed a similar path and knows too well what it leads to. “You’re time is past, old man,” Frankie says, fighting the fear that this could be his future.

Indeed, Essex Braxton was a member of the Gents’ rivals the Zombies but now has found that his innate “mercilessness” has freed him to be a dandified low-level gangster who now has the power. He tells Frankie, whom he nearly knifed to death a decade ago, “You’re a ghost.”

The most intriguing relationship is that of Frankie and his doggedly supportive but clear-eyed wife Rita, a former member of the Gents’ auxiliary, the Debs. There is a deep abiding love cemented by sacrifice and loyalty that transcends the frustration and failure of how their lives have turned out. But the apathy and lethargy that Frankie’s descent has wreaked also has weakened their relationship. .

Wesley, better known for his screenplays of the Bill Cosby-Sidney Poitier films Uptown Saturday Night and Let’s Do It Again, deftly exposes these character’s interiors, even when they aren’t self-aware enough themselves to go more than one level into introspection. (The original Broadway production starred Dorian Harwood and Morgan Freeman in 1978, but the play is not well-known in mainstream circles).

All the actors give themselves totally under Pryor’s leadership, but some are better than others.

As Frankie, Keith Oliver is a South Florida native who has worked in New York and on television, but this is his local debut. His skill is in creating a persuasive portrait of a creature of the streets, but he exudes Wesley’s vibe of someone insightful enough to foresee the increasingly inevitable acceptance that he has already reached a dead end.

Also notable is Chat Atkins as the old-before-his-time burned out panhandler Zeke who can see what’s ahead for the Gents (Atkins appeared in the play 20 years ago with AHCAC assistant director Teddy Harrell and directed by Pryor. Ray Lockhart has only one scene in flashback as Frankie’s, but their tragic confrontation is one of the most effective in the evening.

Pedro Louis, dressed in costumer Ann Payne-Nimmons’ painfully accurate three-piece coffee plaid suit, is chilling as the gangster who has learned that the way to survive is to be willing to do what the other fella won’t.

But saving the best for last is Rita Joe as the steadfast wife Rita. In production after production, she has among best thing in the shows she has been featured in, such as Island City Stage’s The Submission. Sitting on stage all night vainly trying to knit a scarf in vain and waiting for Frankie to come home to be emotionally recharged, Ms. Joe’s Rita provides Frankie and the show its emotional anchor and its lone voice of humanity. Her Rita is all fierce devotion, reined in fear and crystalline evaluation of her husband’s weaknesses. And her monologue about her days in the Debs illustrates the pride that some African-American women found their self-worth in the 1960s through the reflected glory of their lover.

The production may not be perfect, but it’s an impressive thoughtful look at the bitter fruit of hopelessness and dreams not just deferred but permanently lost.

One Response to Lost And Adrift In The ‘Hood: The Mighty Gents At AHCAC