Dramaworks’ Honors The Family Verities: Greed, Sex and Murder In Revival Of The Little Foxes 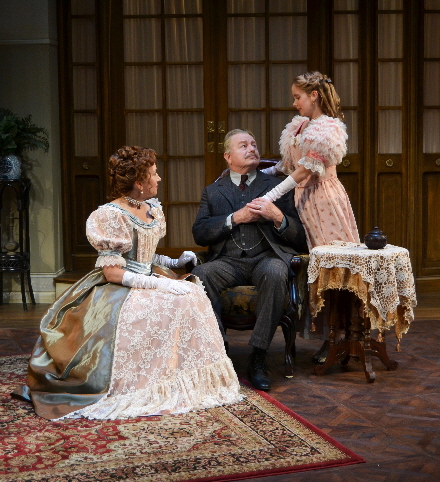 No, not the latest installment of The Real Housewives of Palm Beach County or a last week’s White House cabinet meeting.

It’s Palm Beach Dramaworks’ revival opening this week of The Little Foxes, Lillian Hellman’s 78-year-old classic drama of power politics in a dysfunctional family that’s a cross between the Borgias and the Macbeths. It’s set in small town Alabama at the turn of the century – the turn of the 20th not the most recent one, although, costumes aside, much of it could resonate with today’s reality shows.

“It is a very powerful piece of narrative storytelling and I think it sustains its power even for today’s audience,” said resident director J. Barry Lewis. “I don’t think it’s stodgy or musty or moldy. You blow off the cobwebs and you have something that is still highly relevant but entertaining. Evil personified on stage is always fascinating.”

The Little Foxes is one of those plays that has become an American classic, yet many people have not seen it or fail to recall it clearly despite frequent Broadway revivals and the iconic 1941 Bette Davis film version.

Lewis improvised a conversation. “When you say The Little Foxes, people go:”

Indeed, several of the cast members were tangentially aware of the title, but had not read, including its star Kathy McCafferty who portrays the central character, Regina Hubbard Giddens.

But, McCafferty said, “I knew of the play and I read it before the audition. As soon as I read it, I could see this woman is being held back by the restrictions of her time, by her family dynamic, and by not having the means of having a say in her own life. If you don’t have money, you don’t have choices and a woman at that time is dependent for every single thing for a man to say yes or no to, to get a new dress, to take a trip, in her case, to make an investment.”

Hellman created a supremely intelligent and rapaciously ambitious woman in Regina, trapped in a society in which her sex blocks her from any direct influence in the burgeoning family business run by her two wealthy brothers. But when they want a loan from her strained finances (actually from her weak-willed husband who controls her inherited cash) for a crucial expansion, she finally has a chip to play in a high-stakes, no-rules battle for power.

While Dramaworks’ has no plans to alter the emphasis, the play’s Regina is less the independent force of nature than Bette Davis’ cinematic interpretation was – just as venal but less powerful.

Barry, who has directed other classics for Dramaworks, likened this family dysfunction to the timeless discord in King Lear and Who’s Afraid of Virginia Woolf. But he saw even more modern resonances in the greed-trumping-priciples ethos.

“When I reread the play, you’re always looking for that one or two (lines that represent) the whole play a Hellman gives them to Addie the servant. (“Well, there are people who eat the earth and eat all the people on it. . . . Then there are people who stand around and watch them eat it.”) It’s very important that we…do not become those who eat or simply passively watch. What is my responsibility wherein lies my action to humankind, to nature, to the family. And that really caught me because we seem to be becoming more isolated and more divided, and how do we begin to the conversation to bridge the gap.”

But McCafferty, who played the flinty heroine in Dramaworks’ Outside Mullingar, has to come at it another way: While Regina does despicable things, the actress cannot play her as a villain.

“She has no independent means. She says (to her husband) ‘All my life I’ve had to make force you to make something of yourself. When I met you, you were a small town bank clerk,’ This man has the privilege and opportunity to better himself and he doesn’t take it and that’s maddening to her. Because if she was in that position, she’d be running the town. She knows she would. She knows she could. But she is not allowed to. If she was born 100 years later, she would be a CEO or in politics. She is chastised by her brothers; she is told to shut up and smile by her brothers.”

One way Regina controls her husband is be acquiescing to sex she doesn’t want. McCafferty’s voice grows in passion. “She’s a great actress. She has to assess what the man wants. And that costs her. She has to suck it up — to have to go against your nature, to soften yourself and placate and bend and not say what you want to say. Day after day. Women might not relate to what this woman does, but they will understand why.”

The original Broadway production’s Regina was Tallulah Bankhead who was lauded for her performance, followed in other revivals by Anne Bancroft, Stockard Channing and last season by Laura Linney and Cynthia Nixon alternating as Regina and the weak sister-in-law Birdie. Local veteran theatergoers may recall the 1981 edition marking Elizabeth Taylor’s Broadway debut which actually premiered at the Parker Playhouse in Fort Lauderdale because the production was bankrolled by South Florida producer Zev Buffman.

The show is a gift for setting and lighting designers, but especially for Dramaworks’ resident Carbonell winning costume designer Brian O’Keefe who gets to garb 10 actors in multiple outfits that reflects their status, moods and character evolution.

For instance, Regina’s final outfit is a shade of green that projects, greed, money, envy, but also given the climax of the play “it’s also the color of life and beginnings and growth. I want this costume to convey all of that. In addition, the style of it is based on a sort of fusion of male and female fashion because she is really acting like a man in a man’s world being a woman of this time.”

O’Keefe designed the show about 20 years ago for the Seaside Music Theatre starring Barbara Bradshaw and Gordon McConnell. But that tine he had a staff of six to eight people; this round its him, a full-time assistant and two part time people.

Other cast members include Dramaworks’ regulars Dennis Creaghan  (who appeared in the Elizabeth Taylor London tour) as one of the scheming older brothers, Rob Donohoe as Regina’s gentle husband, Caitlin Cohn (the precocious girl in last season’s Arcadia) as their pivotal daughter Alexandra and Avery Sommers as Addie. Plus James Andreassi, Denise Cormier, Taylor Anthony Miller, and Frank Converse.

The cast has been trying to create in a couple of weeks the kind of familial familiarity that Hellman’s cadre built over decades.

If it works, McCafferty’s goal is to “take the audience on a journey in which these characters do some highly questionable things, but they can love us or hate us or be horrified by us, but that they come to a place of understanding of how we come to these points of our lives, to these choices because of certain limitations or why we have come to the breaking point.”

She paused, then “Hopefully there will be a moment or two of recognition in themselves. That, to me is the most compelling theater when we see people doing things we have said I will never ever do, but you have a moment of recognition that surprises you. A door cracks open on something that you don’t want to relate to, but somehow find you are.”