The Little Foxes Explores The Cost Of Greed At Dramaworks 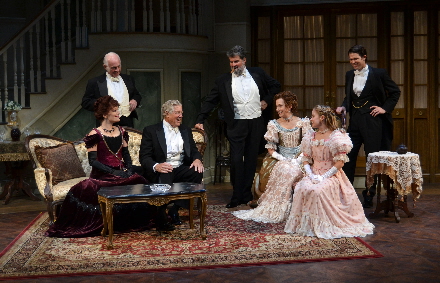 Not the kind of family gathering you have at Thanksgiving: The Hubbards in The Little Foxes / Photo by Samantha Mighdoll

Greed—that timeless vice that steamrolls over everything in its path—is as relevant today as it was in Lillian Hellman’s 1939 drama The Little Foxes, now receiving a sumptuous revival at Palm Beach Dramaworks.

The obsession with money and power has, at best, bought the disintegrating family of the Hubbards of Alabama, a barely disguised hatred of each other and the contempt of their neighbors and servants. At worst, Regina Hubbard Giddens and her two brothers, Benjamin Hubbard and Oscar Hubbard, have lost their souls, discarded somewhere along the line as easily as they cast aside the people in their lives or the wild life that Oscar shoots daily.

What fuels the Hubbards’ latest fixation is the chance to join forces with a Chicago company represented by William Marshall (a persuasive and all too brief appearance by Frank Converse). Marshall will join forces with the family to build a cotton mill to “bring the machine to the cotton, and not the cotton to the machine.” The charming, yet a bit smarmy Marshall sees extra profits in the cheap labor and absence of unions. For the Hubbards, the deal will propel the family from the solidly upper middle class to the arena of the truly wealthy—able to buy and do just about anything.

Ben and Oscar want the deal very much as does Regina who lusts after the money and the freedom it will bring. But there is only one hitch: Regina’s husband, Horace, who has spent the last five months in a Baltimore hospital, has refused to answer his brothers-in-law’s letters and Regina’s pleas about the business plan. Money is not a problem—Horace has the needed $75,000, and more, for his share in bonds kept in a safe deposit box at his bank. Banker Horace’s refusal to be a part of the Hubbards’ plan goes much deeper than money.

Palm Beach Dramaworks could not have picked a better play to launch its 18th season and continue its mission of presenting classic and timeless plays. Although set in 1900, only the era-specific costumes, and perhaps the lack of cell phones, date this 78-year-old play. Sexism, racism, uncontrolled ambition, domestic abuse, sex, murder and embezzlement continue to be a part of society’s fabric, sometimes hidden behind closed doors, sometimes now discussed on social media.

Dramaworks’ production of The Little Foxes, under the impeccable direction of J. Barry Lewis, quickly gets to the heart of the story, showing all the characters’ myriad shadings and motives.

While the Hubbards are despicable people, they are not inherently evil. Ruthless, unconscionable and self-centered, yes. And each is certainly a product of their upbringing and the era in which they live..

Kathy McCafferty, who played the flinty heroine in Dramaworks’ Outside Mullingar, is luminous as Regina, who more than anything wants money for the power it brings. McCafferty plays her not as a bitch, as a couple of people commented during one of the intermissions, but as a woman who desperately wants what has been denied her all her life. Her father left all his money to his sons, leaving her out; she married Horace for financial support only to be trapped in a loveless marriage to a decent man who is repulsed by her naked ambition. Too many have discounted Regina, and she is tired of it. To McCafferty’s credit, the actress makes us understand Regina’s motives yet never completely sympathize with her. McCafferty’s Regina is repulsive, yet the most interesting person in the room.

Regina’s counterpart is her sister-in-law Birdie, whose marriage to Oscar quickly devolved into scorn and domestic abuse. Denise Cormier, making her Dramaworks debut, delves deeply into Birdie’s psyche, who tries to hide her unhappiness with alcohol. Birdie and Regina are near mirror images of each other—each hates her life and each has learned to be disappointed by people, and it shows. The difference is Regina has turned her hatred externally, with animosity toward others while Birdie’s has turned her dissatisfaction inwardly with liquor. (These two sides of the same personality was explored in the recent Broadway revival in which Laura Linney and Cynthia Nixon alternated as Regina and Birdie.)

As the brothers, Dennis Creaghan, one of South Florida’s top actors, and James Andreassi, seen last season in Dramaworks’ Arcadia, each bring a sense of entitlement and privilege they so desperately desire. Andreassi’s Oscar is the more selfish, with little regard for his wife, Birdie, or his seemingly ineffective son, Leo (a terrific sleazy Taylor Anthony Miller). Oscar isn’t just an enthusiastic hunter but a killer of wild animals, who leaves fowl and squirrels in his wake. When it is suggested that many of the town’s poor residents could use the meat to feed their families, he just shrugs. Creaghan’s Ben is the more practical, gleefully finding ways to cut out his brother and sister from any profits.

Rob Donohoe, who has been in seven Dramaworks productions, brings a sense of honor and calm to the Hubbards’ chaos as Horace. Suffering from heart disease, Horace is no weakling, trying to secure a future for his daughter, Alexandra (a perceptive Caitlin Cohn) while using his money against Regina. Pale and shaky, Donohoe truly seems ill that at least a couple of audience members expressed concerned about his health. (He’s fine; he’s an actor.)

Avery Sommers, one of the area’s best vocalists, brings an intuitive sense of observation as the maid Addie. Her subtle facial expressions show that she knows what this family is, and has no illusions about the people for whom she works. Yet, her respect for Horace and love for Alexandra keep her here.

Rounding out the cast is Patric Robinson, making his Dramaworks debut as the Giddens’ other servant, Cal. Robinson delivers a nuanced performance as a man who is loyal to Horace, but whose service is constantly belittled by Regina’s brothers.

Brian O’Keefe’s costumes are spot on, illustrating an upwardly mobile family and each’s character’s personality. Once again, Michael Amico’s scenic design pinpoints the settings’ nuances. The formal furniture, the winding staircase and pocket doors leaving to a dining room speak of money and a longing for being a part of the upper echelon. Paul Black’s lighting and Brad Pawlak’s sound enhance the production.