Mad Cat’s “so my grandmother” is an Unruly Helluva Hoot 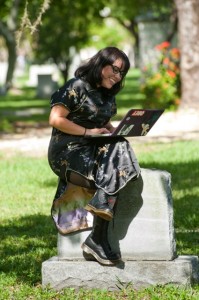 I want some of the drugs that the Mad Cat Theatre troupe is taking.

It must be some really good stuff to produce the anarchic fever dream entitled so my grandmother died, blah blah blah.

Paul Tei, co-founder of the company that always seems to be preceded by the adjective “edgy,” has returned home from Los Angeles to write and direct a satire that will charm the open-minded and puzzle the conventional.

so my grandmother is a return to the idiosyncratic fantasias that Mad Cat favored years ago, such as Shepherd’s Pie and Helluva Halloween. Like them, it’s messy, undisciplined, even self-indulgent in its determination to break the rules. But it’s also a gold-plated hoot watching talented professionals smashing down traditional preconceptions of theater.

Part Firesign Theater, part Pirandello, part its own brand of madness, Tei’s world premiere is the theatrical equivalent of Lewis Carroll’s descent into serial nonsense. But in Tei’s case, you can detect, just barely, a social message about the search for post-feminist identity. I think that’s it. Maybe.

Much of it is a mash up tour of pop culture and venerable literary history complete with up-to the-millisecond nods to Tosh.0, Ezra Pound, Scrabble, Chelsea Handler, Ibsen’s Hedda Gabler, Scruby’s restaurant, Three Sisters, Marion Cotillard in Inception, among scores and scores of other references.

so my grandmother has no linear plot, just a set up: Polly Chekhov (Melissa Almaguer), a hip-hop poet struggling in Hollywood, California, has come home to Hollywood, Florida, to write a eulogy for her grandmother.

As she struggles with the assignment on her laptop, Polly is distracted by a quirky collection of relatives such as a sister Monica (Erin Joy Schmidt), a single mother who matter-of-factly reveals that she can read minds; another sister Annabella (Deborah L. Sherman), a dour performance artist/choreographer; a Heat-obsessed Dad (George Schiavone), and a clueless Mom (Beverly Blanchette).

Providing us insight into her creative process and her true reactions to her family, Polly has brought along a very chatty, very hip Greek chorus who are really voices in her head (Anne Chamberlain, Ricky Waugh and Troy Davidson). One of Tei’s inspired bits is that Monica can hear the trio riffing and she interjects comments to Polly’s unspoken thoughts.

There’s also percussionist Matt the Musician (Brian Sayre) who Polly hired to play solo for the wake and who she enlists several times to provide xylophone music for the play itself. “Matt, can we have some underscoring here?” she asks. Plus there’s a funeral director who lives with cats (Eli Peck). It’s a large cast recently escaped from the asylum.

so my grandmother not only tears down the fourth wall, it dispenses with the second and third walls. Actors talk to the audience, break character, seemingly abandon the script. When the family is contemplating where to go to dinner, Polly pulls onstage the comely Assistant Stage Manager Margaret (Lauren Butler) to give her dining review of a barbeque joint.

Someone kibitzes her food review with the line “Sauce so good, it’ll make you want to wake up and slap the governor’s wife.” So, does that make sense? Not exactly. But admit it, it’s funny.

One drawback of an unrelieved procession of nonsense is that mainstream audiences will spend a lot of misspent effort struggling to get their head around what Mad Cat is trying to do. It’s only when you throw up your hands and just hop in their back seat for the ride that it’s possible to enjoy it. Tei even lampoons that confusion. After Polly gives an impassioned, imagistic, but pretentious reading of her poetry, a relative asks her the same thing the audience is thinking:  “So who is this about?” To which, Polly answers, “Why does it have to be about someone?”

The show does meander too long because without any clear narrative, discernable structure or much dramaturgical discipline, the show cannot afford even a single joke to fall flat lest the momentum slip off the rails.

It’s hard to assess the acting because these are intentionally over-the-top comic characters. Made up to look like Ugly Betty or Abby from NCIS, Almaguer makes a dependable linchpin with a huge grin that often vanishes into angst. Occasionally, she seems to lose a little energy, but she’s spent a lot of it already delivering long flashbacks depicting what we hope was intentionally pretentious performance poetry.

Schmidt is flawless as the daffy and shallow single mother; Sherman is delightfully silly in her dance recitals. The three actors playing the chorus are especially good, each trading characters and accents like quicksilver chameleons, threading their lines in and around each other like speed demons on I-95.

Some of the other performers haven’t quite nailed down their lines, but that should improve by the time next week’s audiences see it. Two performers, frankly, have little or no timing and that’s distracting when unimpeded flow is crucial to the audience being too bamboozled to question the insanity.

On the technical side, Matt Corey has provided fine sound and music arrangements, Elaine Bryant has pieced together disparate furniture for the eclectic set, Melissa Santiago has created varied environments with her lighting. Best of all are the costumes designed by Leslye Menshouse, an appropriate mishmash of styles that seem the result of a demented shopper let loose in a thrift store. Costume pieces range from a three-cornered pirate hat to a Dead Kennedy’s cloth emblem.

The dramatic arc, such as it is, suddenly remembers to come together in the final 10 minutes. There’s an epiphany that I admit not being able to follow, plus a genuinely touching eulogy from Polly to her grandmother that recognizes the departed’s independent spirit in an era when women were expected to be subservient drones. The finale has no clear connection to the previous two hours, but to insist on a little dramatic coherence at that late date seems a little churlish. 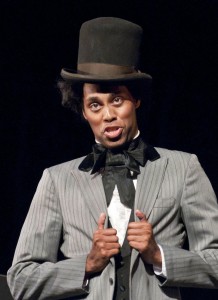 Finding the new space: This is one of the first shows to be performed in the new Light Box at the Goldman Warehouse space in a dicer section of the Miami Design District (A security guard was on duty).

The multi-purpose black box space had 135 seats in this configuration with the audience on three sides. The playing area has as much square footage as a traditional proscenium stage, but which M Ensemble recently shrunk for a more modest production. The promising space was created by and operated by the venerable home of cutting edge performance art, Miami Light Project.

It’s a shade difficult to find because there is little or no signage. It’s the one-story battleship grey warehouse one building east of the corner of Fifth Avenue and 26th Street, sitting on the south side of the street. The entrance is on an alley on the west side, lined by a bamboo fence.

Although the space has been open a few weeks, the grand opening celebration is slated for Oct. 6. See www.miamilightproject.com for details.