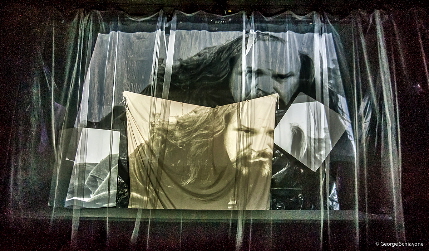 Even though its late March, we remain in one of the busiest seasons in South Florida theater. If you don’t see a review of a show that has opened while looking at the top of the front page, please scroll down the page or use the search function.

The Mad Cat Theatre Company, which prides itself on experimenting with non-mainstream offerings, has collected three short Samuel Beckett plays under the umbrella title, Tones On Tales.

Some people will find this evocative, highly-stylized pieces mesmerizing; others will run screaming for the exit.

The three pieces spread over a single hour are Beckett at his most inscrutable: Eh, Joe, originally a 1966 television piece turned here with the Beckett estate’s blessing into a film; and two playlets, Not I (1972) and Footfalls (1976). There’s not a shred of his dark humor apparent, only an emotional wasteland marked by bleak minimalism.

Directed by Mad Cat founder Paul Tei, the pieces succeed in the sense that they produce an internal response in those who force themselves to stay open to it, although most people would be hard pressed to specify exactly what they felt. Anxiety? Sadness? Certainly a pronounced unsettledness, but exactly why and at what is hard to nail down. It’s like a theatrical Rorschach test; you see what you see. The evening’s advertising says the production “explores the diminishing light of our lives,” which thinking about the works on the drive home does seem to unify them.

It can be argued that the pieces as written and produced are shot through with a self-conscious self-indulgence such as the dirge-like pace in the first and third pieces that relish repetition and rhythm like free verse poetry. But that’s what Beckett sought, so it’s hard to argue with.

The evening opens with Eh, Joe, one of Beckett’s most produced and rewritten visual works, filmed here in a stark black and white by Ted Chambers. The images are projected through a diaphanous curtain across three disparate white surfaces.

Tei, with his tangled forest of shoulder-length hair and scruffy beard like a blue-collar Rasputin, rises up on the screen like a hulking monster, carefully locking himself in his room. He reminds you of nothing so much as one of those mind-blasted transients on the roadside, their eyes partly dead, partly menacing.

The paranoid hermit says nothing throughout the film, but a cool, accusatory woman’s voice (Tei coyly declined to identify who the actress was) speaks inside the man’s head. As she quietly and very slowly berates the man, the camera begins to close in on the man’s face. By the time the piece ends about 20 minutes later, we are nearly inside a single eyeball with an unidentified reflection visible in the pupil.

Without cheating by looking at Wikipedia, the voice may be that of a former lover who committed suicide, perhaps the source of the man’s near dementia.

Under this piece, as the others, a strange combination of sounds provides a steady underscoring, such a low rumbling designed by Matt Corey.

The second piece, Not I, opens with tweeting birds over electronic warbling. A disembodied pair of blood red lips appears in a tight spot eight feet above the floor. And that is the only light. It looks precisely like the opening number of The Rocky Horror Picture Show – but it’s what Beckett ordered. 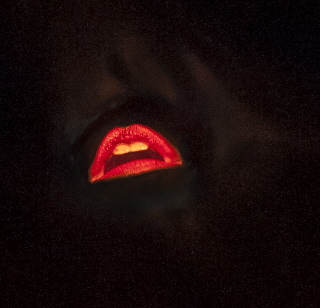 There is nothing funny going on here. Actress Deborah L. Sherman (so good to have her back) reels off a monologue that seems, again seems, to trace the life of a woman who she claims is not her, but which she relates in an increasingly agitated pace with mounting angst. At a few points, a shaft of light snaps on briefly on a bizarre figure dressed in a strange costume of frills.

What exactly Sherman is talking about is unclear; the verbiage comes quickly and in disconnected fragments. But Sherman has labored hard to suss out the meanings for herself, so you sense that she knows what it going on. You can basically come along for the ride. Perhaps repeated hearings would make the meaning clearer. But maybe not; it’s Beckett and he was famously ambiguous about this and other works when questioned about them. What Sherman and Tei deliver are feelings of dread, unease and elegiac sadness.

The third piece, Footfalls, opens with a shadowy spectral figure pacing across a gloom-drenched stage in a ragged wedding dress that would make Miss Havisham envious, courtesy of Leslye Menhouse. In the quiet, you can hear her bare feet slapping on the floor and the train of her gown dragging behind her. The elderly woman with a riot of steel gray hair, named either May and/or Amy, could have been walking this circuit for decades, and in fact, likely has. She converses with the voice of her unseen mother who she has cared for since Amy was young. She has sacrificed her life to the task, virtually a prisoner in solitary confinement.

Not much actually happens and the incantation of words are more about rhythm than content, but Carey Brianna Hart dives so deeply into the vibe that she disappears into the character. Her voice is a funereal melancholy that creates an eerie feeling of someone living only in the sense that blood is creeping through their veins.

The lighting by David Nail is especially effective here. We barely see Amy on one side of the stage and almost never see her face. On the other side of stage, Amy almost melts into the darkness, only visible because the auditorium is so small. Thanks to Hart, Tei and Keenan, you can wonder whether you are seeing a flesh and blood victim or an illusion,

A pre-show stroll online will reveal an intended story of sorts behind some of these pieces. If you see the show cold and then do the research, you may recognize some of those elements. But in person, without the foreknowledge, they fly past you in a haze in which you only glimpse a shred of meaning or backstory here and there through a refracting distorting pane of glass.

It hard to judge these works or the production, much as it’s difficult to assess non-representational art in a museum. Its very nature exempts itself from traditional critiquing. Whether you find all this indecipherable and boring, or intriguing and moving will be a matter of individual temperament.

If this intrigues you, act now: the show only runs through Sunday and seating is limited.