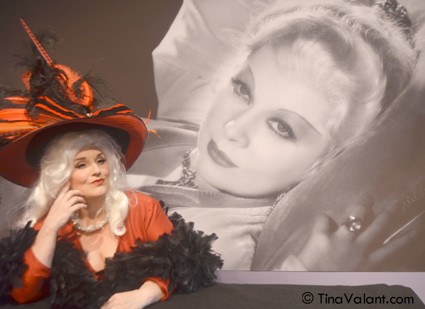 Celebrity has become a 21st century synonym for the brand of fame unearned except by outrageous behavior or uncommon beauty, not necessarily by virtues or accomplishments.

But Claudia Shear’s 2000 play Dirty Blonde about provocateur Mae West and her fans sees celebrity as a more complex symbiosis. It traps a star as much as it rewards her, and yet their manufactured personas can still inspire adoring acolytes to change their own lives.

The Plaza Theatre’s production is similarly a conundrum of contradiction – the cast delivers appealing performances, but the play never captures the sex symbol’s blissful bawdiness and nova-like lifeforce that has invigorated other editions.

This is strange since the dual role of Mae West and one of her present day fans are portrayed by the wonderful Margot Moreland who, indeed, played the role to critical and popular acclaim in GableStage’s production in 2003. And she is ably supported by Ken Clement as another West fan (among other roles) and Terry M. Cain in a gallery of parts such as West’s jettisoned husband.

The effort led by director Beverly Blanchette isn’t poorly executed, but the vicarious thrill of being in the presence of a truly uninhibited, nose-thumbing iconoclast is simply missing.

Shear constructed Dirty Blonde as vaudeville-like scenes that bounce forward and back in time on two planes that are interlaced.

One plane depicts West in anecdotal scenes tracing the arc of her life. She starts as a struggling song-and-dance woman, later becomes an actress/playwright/director of stage and film comedies that celebrate sex with double entendres that gleefully run over moral codes like a streamroller. Finally, in semi-retirement, she is encased in a painful parody of her invented persona that now possesses her life 24/7.

The second track depicts two present day fans who are obsessed with West’s verve and nerve: Jo, a temp and a would-be actress, and Charlie who supervises the public library’s film collection. Both are lonely, wounded people too afraid to take an emotional risk by exposing their inner selves. Once they meet at West’s grave on her birthday, their mutual worship of West creates a prickly friendship. Over the course of the play, they recognize that West’s greatest virtues were her pride and her fearlessness, qualities that encourage them to open themselves up.

Ironically, Shear underscores, for all West’s courage in defying censors and attempts to control her, she was never able to give her heart completely to anyone.

While not an outstanding script, Shear and original director James Lapine invented some imaginative moments of theatrical staging. In one, Moreland is center stage donning West’s outrageously come-hither scarlet gown and topped with an outrageously outlandish feathered hat. But, in fact, it is two scenes occurring simultaneously. On one side of the stage is Cain as West’s husband’s encouraging West to “become” the persona that would define her life; on the other side of the stage, Charlie is encouraging Jo to don the same costume which will, in fact, unleash her inner self.

Another strong series of scenes are flashbacks depicting when Charlie wrangled visits to the decrepit star whose blonde hair had become a platinum wig and who had become a sad lampoon of the creature she created – forced to live or choosing to live the artificial role full-time.

But throughout this production, that blazing sexuality, that incandescent insolence that West exuded her entire life only glows like a banked fire.

Further, the audience gets lost in the early scenes as Shear sends the narrative caroming in space and time and even switching point of view: the nascent May West one moment, the elderly icon the next; Jo speaking directly to the audience breaking the fourth wall, Jo and Charlie in book scenes with the fourth wall restored.

Still, Moreland deftly slips on West like a second skin without trying to do a drag show impersonation. She wriggles and coos and dances and sings a few songs. One strength of her performance is that her Mae West always comes across as a real person, even when Mae West is portraying “Mae West.” She also skillfully adopts different voices for West at different ages ranging from a youthful tentative voice when she is still sculpting her creation to the full-out Diamond Lil sound at age 87. Moreland does have a fine topspin for West’s devastating repartee. When one man asks, “Miss West, I’ve heard a great deal about you,” Moreland purrs, “Yeah, honey, but you can’t prove a thing.”

Still, for a show about a woman who brought suggestive flirting to an art form, Dirty Blonde doesn’t quite seduce.