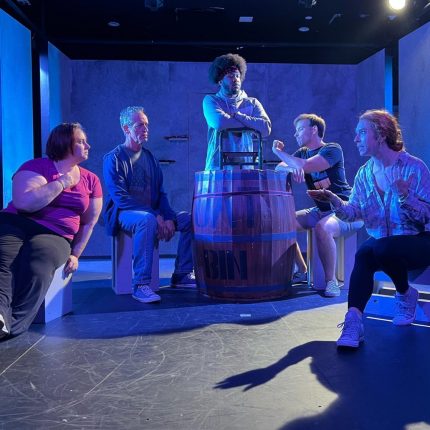 “Let me tell you about the very rich. They are different from you and me.” So begins a famous passage, circa 1926, from F. Scott Fitzgerald, a writer who knew a thing or two about the suffocating cosset of privilege. He studied the ultra-wealthy microscopically, as a scientist would an invasive bacterium, as well as macroscopically, as if the dwellers of mega-mansions were specimens in a luxurious zoo.

Fitzgerald’s authoritative summary lingers unspoken over Lee Blessing’s Black Sheep, produced by Main Street Play some 20 years after its world premiere at Florida Stage. The official setting is “a home” in “the present,” but the location is Gatsbyan in nature—a lily-white enclave where the obscenely wealthy, sitting atop an infinite largesse, fumble for meaning and pleasure in an airless sanctum of their making.

Carl (Kyran Wright) arrived in this world as a child, though is certainly not of it. As the African-American son of a mixed-race couple, his working-class mother wed into such a family. The marriage didn’t work out, and 10 years prior to the events of Black Sheep, Carl shot and killed his white half-brother in an accident that spiraled out of a control. Now, released from prison as a young man with only a backpack of belongings to his name, he has returned to the lavish home of his uncle, Nelson Winship (Michael Vadnal) and Nelson’s wife Serene (Jennifer Leah), who are eager to adopt Carl—for reasons, it turns out, that are more exploitative than magnanimous.

This premise could be the stuff of straightforward drama, but Blessing takes a different approach, writing Black Sheep as a satire that’s closer, in its dark and lunatic tone, to a Christopher Durang or Jean-Paul Sartre comedy. (Hell certainly is these other people.) From the first moment, we know we’re not in a recognizable reality, as Nelson welcomes Carl to the family while wheeling a barrel on a handcart throughout the guest house of his property, moving the object around as if searching for the best feng shui. Once the barrel is settled, it doesn’t move for most of the play. Sometimes people appear inside it, then promptly disappear.

These include the Winships’ ne’er-do-well son Max (Anthony Wolff), a failed filmmaker with ambitions to become a blurb-whore movie critic (he spends his days feverishly testing out empty hosannas like “packs a wallop” and “the kids will love it!”), and Elle (Lucy Lopez), the leggy object of his affections, who has little adoration for Max but much interest in the Winship fortune. As the play’s sole voice of sanity, Carl tries to be a reliable narrator of the Winships’ machinations, but their guest house functions as a slippery vortex between dreams and waking life.

This critic did not see Black Sheep’s Florida Stage premiere, though it’s possible to imagine a sharp and effectively comic treatment of this material. Main Street Players’ production, however, is so tonally uncertain—so lead-footed—that its eccentricities simply ring hollow. Like musicians struggling to stay “in the pocket,” the actors speak at each other, not to each other, in ways that feel, more often than not, like they’re just reciting lines. The humor doesn’t land, with the occasional exception of Wolff’s physically expressive performance as the hedonistic Max, and scenes that are supposed to play as tense fail to engage. Even the set construction—Amanda Sparhawk’s theater-of-the-mind design is an abstract space consisting of a concrete-evoking wall and panels with hidden doors—is clunky where it should be seamless, with distractingly creaky entrances and exits.

Furthermore, the play’s potential depths are unexplored. Wright’s Carl is likable enough, but despite being the only normal person in a family of screwballs, he plays the character as a blank slate, registering neither the absurdity of his new reality nor the lingering effects of re-emerging in society after 10 years of prison.

The production’s director, Brandon Urrutia, is a 24-year-old emerging talent who will improve with experience. In some ways, he was presented with a tough sell. Post-Jordan Peele, post-Ayad Akhtar, post-Claudia Rankine, Blessing’s observations on racism, classism and capitalism appear superficial, its characters trading on hoary archetypes of the idle rich and the lampreys that surround them: the patriarch suffering an existential midlife crisis, the desperate and sex-starved housewife, the brazen gold digger. As targets of a playwright’s acid pen, they are little more than fish in a barrel, on a handcart, on an empty stage.