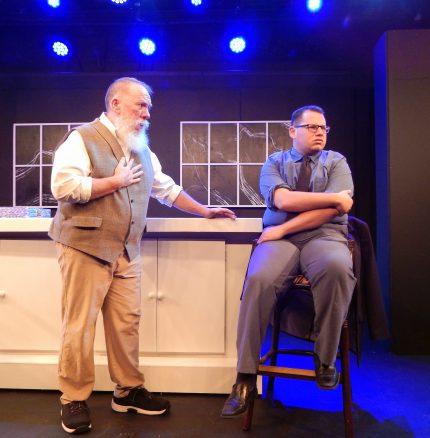 The nasty truth is that when you read that a play, a novel, film or short story is “autobiographical fiction,” most of the time you are justified in fearing an overwrought, underthought exercise primarily satisfying only the artist trying to process their past and venting their accumulated angst.

While most artistic work is rooted in an artist’s experience, very few are Long Day’s Journey Into Night, and O’Neill didn’t want anyone to see it or perform it until he had been dead 50 years.

But sometimes the audience gets really lucky, as in Eytan Deray’s courageous world premiere Educating Asher at Empire Stage – courageous not only because it has been drawn from the marrow of his being, but courageous because he also performs it, unreined and uninhibitedly without any self-serving censorship.

Indeed, the script of this first full-length play that the Florida actor has written is adequate enough. But it is his performance under Seth Trucks’ direction of someone with raging passions and pain struggling to stay inside a tightly controlled coil, that elevates the evening on stage to an undeniably affecting result.

The premise focuses on Asher, a frustrated actor who has come with his lover Mark to the funeral of Elliott Weiss, his supportive teacher. The older man mentored the troubled teenaged Asher in a dozen ways including their love of musical theater, television production, and, crucially, their shared sexuality.

When Elliott developed Alzheimer’s several years ago, an unnerved Asher stopped seeing the man who helped mold him, creating a guilt that aggravated other crises in his character.

Asher hides out in a kitchen at Elliott’s home shared with Elliot’s partner Nick. And suddenly the spirit of Elliot appears, a vibrant gentle creature once again hoping to help Asher deal with a crate of issues. Of course, as with comedies like Topper, Blithe Spirit and TV’s Ghosts, no one else can see or hear him. The script even lampoons the ensuing journey through their past with Asher’s line “Mr. Weiss, this all feels a little Christmas Carol-y.”

Deray, who started the script five years ago and used its development to stay sane during the grueling pandemic, makes no bones that this is based on his life and experiences, especially the relationship with a mentor.

He describes Asher in the script as if looking in a mirror: “Asher is handsome, but not chiseled. He is a little geeky, with an average/slightly chubby body build, short brown hair, glasses. Basically, an Everygay.” Asher’s lover describes him as “a classic ball of Jewish neurosis.”

Asher is also infinitely uptight, battling demons inside while his outer persona spouts droll self-deprecating one-liners. The supportive Mark is still trying to get him to open up and commit now one year into their relationship.

For 80 minutes, Deray and Trucks examine, among other themes, varied ways of coping with death, the devastating effect homophobia has on still-evolving self-worth, the pride that should come with being a unique individual, and especially the precious and rare bond that a mentor and mentee can have.

Little in the script is ground-breaking or eye-opening (the same can be said of many plays) but it’s the resonating universality of all who feel like outsiders (and who doesn’t feel that way) that lands squarely. As Asher describes the struggle of discovering his sexuality in a hostile environment, several men in the opening night audience leaned over to their guest and touched a shoulder or whispered in their ear.

The skilled director Trucks makes the most of a script shot through with wry wit with a gay theme: Mark says, “You should check out their DVD collection. They have enough movie musicals to put you into a gay coma.” Or in addition to being a schoolteacher, Elliott was a cantor. Thus, his line, “Yeah. That was one of the benefits of being a cantor in an openly gay synagogue. You can never use too much vibrato. If you become a Hebrew Patti LuPone, the Jewish gays will eat you up.”

But when the raw anger or gut-wrenching sorrow dominates, Trucks has drawn solid and credible performances out of a quartet of actors.

Indeed, it’s what he and the actors do with the script that lands so well.  At no point do you hear the playwright or the lead actor silently crying at you, “Hey, this is my story.” Instead, it comes across as any work that echoes anyone’s coming of age.

Again, playwrights do not often make the best presenters of their work when playing a role, and especially when it’s their personal story on display. But Deray as an actor, who has been playing the second lead in a dozen local productions, creates a carefully controlled portrait that ranges from being shut down to raw anger  — tenors that shift from the present day adult Asher to the anguished teenager in flashbacks and then back again.

Michael Harper makes a convincing lover trying to help the man he loves through a difficult period. And it’s been too long since we’ve seen the veteran Noah Levine who creates an appealing presence as Nick.

But Murphy Hayes, a character actor memorable from many local roles, is a delight as the wise, nurturing Elliott.  Ghosts are nearly impossible parts to pull off on stage (as opposed to film). But Hayes emits a warmth and positivity that makes Elliott a welcome spirit haunting the memory. Dressed in a tan-brown suit, he resembles nothing so much as an expansive Santa Claus with an equally expansive beard, a welcoming smile and twinkle in his eyes. You have to wish he had been your mentor. But he can switch gears when needed to show genuine concern for his protégé.

The script has weaknesses if not flaws. Asher comes to a separate peace with his past including some clearer realizations of what has plagued him. But the source and meat of this reconciliation is not very clear; it’s sort of an existential Dorothy Parker’s “you might as well live.”And some last minute good news on his employment front (a gift from the dead Elliott?) is too contrived to survive the next edit.

A long penultimate speech, sharing with Mark facets of his life and his relationship with Elliott, has worth because Asher is finally sharing at all. But he has spent the past hour going over it with the audience, so there is nothing new here that needs to be said. (Think of the psychiatrist’s needless speech at the end of Psycho.) The playwright could simply end the play more effectively with Asher beginning to open up to Mark instead of diluting the impact of the previous scenes of epiphany. Fade out.

No, the script of Educating Asher isn’t A Great Play, but its inherent honesty, vulnerability and its sincere incarnation on stage make it a worthwhile evening from a promising playwright.