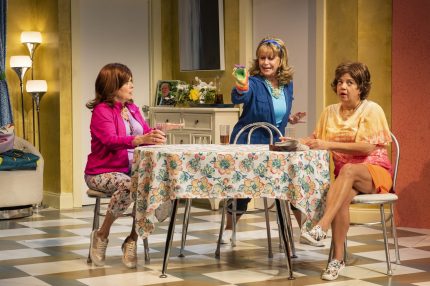 Once upon a time  — say, pre-Edward Albee —  a lot of people went to theater not necessarily for thought-provoking drama (as much as we revere that) but just to have a couple of hours of laughs, maybe with the barest hint of an Aesop’s moral if it was Neil Simon.

The venerable GableStage – which hosted a few comedies under the late Joseph Adler as producing artistic director — takes a break from race relations and Arthur Miller to create a chuckle-fest as well-constructed and skillfully executed as any episode of The Golden Girls, the Mary Tyler Moore show or a Carol Burnett skit.

We mention The Golden Girls because the title, Boca, gives it all away: This highly-reworked second production is like an extended episode of the Girls merged with those Seinfeld evenings set in the Del Boca Vista gated condo for those over 55.

The script is packed with scores of broad gags, wry rejoinders and kvetching in tri-state brogue. But acknowledge that Jessica Provenz’s episodic romp has some gentle themes under the sitcom jokes about a near-addiction to Stevia, staying married out of spite to make their spouse miserable, and the enforced three-inch limit on the height of grass, which also requires a toxic potion to produce the only allowed shade of green.

Threaded inside is the evolving concept of what it means to be a senior citizen in the 21st Century. Florida is no longer “God’s waiting room,” but for many, it’s a re-launching pad.

It speaks subtly to loneliness, the need for community, a search for purpose, being needed by a person or a group, trying to live in the present rather than the past in spite of an uncertain yet all too certain future. Their solution is to live as fully in the present as health, wealth and spirit will allow.

For instance, residents are constantly on the make for coupling. There’s an unwritten Widower’s Waiting Period – the socially acceptable time between a mate’s death and when Oasis residents can start their pursuit. One woman tells a recent arrival: “You’re fresh meat. There’s 400 women living at the Oasis. 105 men.”

The play is constructed in 10 or 12 episodes that include:
*** A poker game in which the hostess offers her husband to her two friends as the prize whenever she dies.
*** The intense campaign to chair the condo board whose zoom meetings includes high priorities like deciding whether to paint the pickleball court blue.
*** Two women stuck in Boca traffic in a Tesla decide to “just keep going” on a Thelma & Louise road trip.
*** A date in which incentives include home-made lasagna and a loaded pistol.

This benefits immeasurably from the direction of Julianne Boyd, the founder of the respected Barrington Stage in Massachusetts where she directed its world premiere.

No less honor is due the quintet of actors who play multiple denizens of the Boca Oasis Club: Beverly Blanchette, Deborah Kondelik, Barbara Bonilla, Robert Zukerman and, of course, how could you do a show like this without Avi  Hoffman.

As solid as the script might be, what’s crucial in pulling it off is the aforementioned director and troupe’s well-honed comic chops and especially their ability to create human beings we can relate to rather than cartoons.

Because trust me, this play is going to be done a hundred times (providing Provenz with an annuity) by community theaters without this quality in their talent pool — and it will land there as only mildly amusing. A musical that will remain nameless tried to do the same thing down here a few years ago and it didn’t land very well except for the audience seeing themselves in the characters.

Indeed, it benefits from what I often call the Theater of Recognition in which a target audience inserts their own experience into what’s occurring on stage and connects with the piece by seeing their lives or their family’s lives or their ethnicity’s story. Think Fiddler on the Roof, Dear Evan Hansen, A Raisin in the Sun or anything by Tyler Perry.

Kudos, too, to Camilla Haith whose comic costumes defy description but are all too familiar to anyone living down here for very long.

Eugene O’Neill this isn’t, nor Dominque Morisseau. But, hey, sometimes you just need to laugh.

Covid Protocol: Face masks will be required for all guests, regardless of vaccination status. Before entering the theater, all guests will need to present either a negative COVID -19 PCR or Antigen test result within 72 hours of the performance OR a full vaccination status card.