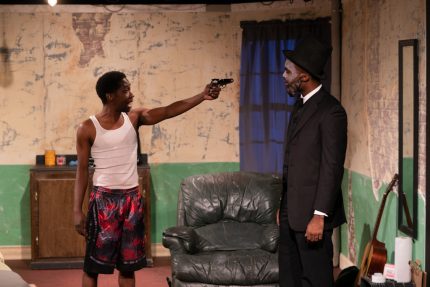 Theater productions and acting performances have a metabolism as palpable as the speed of blood that flows through your veins.

That pulse varies from show to show, even of the same script, and performances intentionally can vary as well within the same show from actor to actor.

The responsibility of the audience is to find those metabolisms and adjust to them.

Main Street Player’s Topdog/Underdog has lava-spewing moments and coiled tension for much of the evening, but it also has elegiac monologues and quiet passages of sibling bonding. They result in the sense of a deliberate pacing in this darkly comic long, long, long day’s journey into night clocking in at three hours including intermission.

But the well-worth-it reward for the patient patron is watching a slow-motion shattering of two brothers struggling with institutionalized racism, poverty, sibling rivalry, and troubled pasts stretching from childhood to last week. There are streams about legacies and inheritances, both familial and the social injustices ingrained so deeply that they don’t result in specific mention.

Unlimited praise is due the two local actors Roderick Randle and Denzel McCausland and director Carey Brianna Hart for achieving justice for the 2001 brilliant Pulitzer-winning drama that cemented playwright Suzan-Lori Parks’ reputation as the incisive chronicler of African-American life.

We meet a tightly-wound second-rate hustler and shoplifter Booth (Randle) spinning verbally and sometimes physically at several thousand rpms.  His older brother Lincoln (McCausland) is nursing secret pains, more cautious after watching how life can cripple a person. (They were named by their long-deserted father as a sick joke).

They are hanging out in Booth’s tawdry one-room apartment with bricks cracking through the plaster and little furniture other than a rickety cot and an old recliner. Booth is practicing the ultimate street hustler’s card game con, Three-card Monte with a smooth machine gun patter, but he’s not quite as good at it as he thinks.

Lincoln arrives from a soul-sapping day at work. He is dressed in a cheap black suit, stovepipe hat, fake beard and is in white face. The only job he has been able to find is impersonating Lincoln in a boardwalk arcade where tourists fire plastic bullets at him in a recreation of the assassination.

It’s obviously a demeaning situation, although neither man acknowledges the insulting racism of the set up. Lincoln acknowledges that he got the job because he accepted less pay than the white man who had the job before him. Booth thinks it’s just silly, but Lincoln says it’s a safe easy way to make a steady income – clearly something a past career did not afford.

But he may end up replaced by a wax dummy and his brother wants Lincoln to return to what he is undeniably a master at: heading up a complex sophisticated gang running a profitable Three-card Monte – which he swore off for some reason. They spar and argue, pushing buttons only they know about the other. And violence is ever-present in the atmosphere, in part because Booth keeps a cheap automatic in his back waistband 24 hours a day, even when he sleeps, when he’s in his underwear.

Parks’ ensuing story is an excoriating tale about family and the false promise of the American Dream for a segment of the population, all of this peppered with considerable obscenities and very frank sexual references.  Race underlies the entire play, not in a direct attack, but as a that’s-the-way-things-are underpinning for all the larger injustices and shortcomings being discussed.

Keeping this intact and engrossing, even when Parks’ script veers close to bogging down, is the achievement of Hart, a veteran local actress, director and playwright who has molded and melded all these facets.

This takes nothing away from the cast. Randle is a dynamo of ambition and yearning for “something” with no clear idea what that is or how to achieve it. His runaway train of scheming and dreaming has little conscience or empathy, yet Randle makes him someone we at least feel sorry for and at times care about.

McCausland initially has the tougher role as the tamped down man with issues quietly swirling inside. He is even-tempered because he knows the realities of an unjust world. But he has long quiet recollections about his past that McCausland makes touching. And when, no surprise, Lincoln is tempted to restore a bit of pride by toying with the cards again, McCausland makes us see the confident successful man Lincoln once was.

Let be fair: Yes, this is a brilliant award-winning script, but a good dramaturg could take 15 minutes out without harming it a shred. At the same time, Hart rightly and courageously has respected Parks’ instructions to let the work breathe, to included pauses and intentional “spells” in which nothing is said.

At this precise point in South Florida theater’s timeline, as companies are pointedly trying to diversify titles and casting, the emergence of Randle (MSP’s Shakespeare is a White Supremacist) and the recent rise of McCausland (from New City Players’ Lungs) is an encouraging reminder that there has been and continues to be an available surge of young African American actors living in the region.

COVID Protocol: Masks are not required.

Topdog/Underdog runs through Oct. 16 at Main Street Playhouse, 6812 Main St., Miami Lakes, 8 p.m. Friday and Saturday, 2 p.m. Sunday. Tickets are $30 general admission and $25 for students, seniors and military. The running time is just under 3 hours including one intermission. Visit mainstreetplayers.com.