Estefan Musical On Your Feet is Triumph at Actors Playhouse 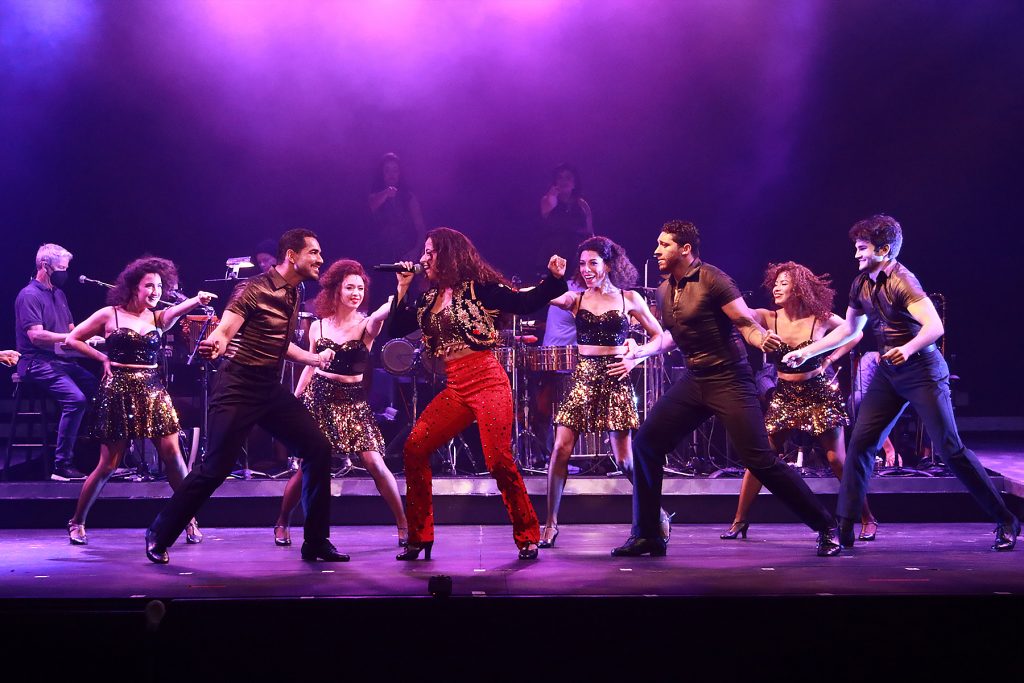 Claudia Yanez as Gloria Estefan leads the company in a rousing show-stopper in Actors Playhouse’s On Your Feet! / Photos by Alberto Romeu.

The moment after the house lights go down at Actors Playhouse, there’s a percussive warmup of Latin beat and then the auditorium explodes with a blinding almost deafening assault of light, sound and vivacity as you are immersed into the Gloria Estefan and the Miami Sound Machine’s iconic “Rhythm Is Gonna Get You.” Odds are you’re a goner from that moment on.

The pulse, the emotion, the drive of On Your Feet! rarely let up for the next 2 ½ hours except when the bio-story of Gloria, Emilio and the music they pioneered winds through narrative scenes of romance, family strife, tragedy and triumph.

This local production is darn near every bit as vibrant and polished as the Broadway and national tour – sometimes even surpassing those editions.

It helps, of course, that this production is being performed for a hometown crowd who see the Estefans and their professional-personal benchmarks as “our story.” But “our” refers to far more than Latinos, or immigrants, or minorities, or Miamians. As Emilio has said many times of the work, it’s about those who still believe or hope to recapture their belief in the feasibility of the American Dream.

It’s a surprisingly conventional musical in every aspect, but the nuclear energy, cultural pride, considerable verve and boundless joy pouring over the footlights is irresistibly enthralling. From the opening number to the curtain calls, the unfettered joy of release blazes from the faces of every actor and musician.

Of course, key to winning the audience over is the charismatic creations of Claudia Yanez and Jason Canela as the duo. Neither are physically doppelgangers for their inspirations who were in the audience opening night. Their voices are similar but not a copy, a smart move since any attempt at imitation would be doomed. But they have winning personalities and acting chops to put across the dramatic scenes a bit better than even the Broadway cast.

Still, the central assets are 20-plus numbers from Estefan songbook slipped in, not in chronological order of creation, into the heartwarming story of two Cuban-Americans who fused Latin rhythms and American pop, then fought to become a crossover genre. Much of the basic sound is very close to the original tracks, but subtly enhanced to fit the Broadway tropes by a superb on-stage band.

The saga tracing their hard-won success as well as Gloria’s comeback from a crippling accident in 1990 is the stuff of local legend and the script has passing references to Miami touchstones such as Y-100 and Casanova’s, which elicited warm murmurs of recognition from the audience.

It also has that sense of unreality as you can feel the insertion of timeline and narrative signposts. Similarly, there are dramatic declarations to the effect that “No one has done such-and-such before! It can’t be done!” which you know darn well means it will be accomplished about 30 seconds later in stage time.

But it’s all forgiven, even embraced as part of the trope, for two reasons: that top 40 music is electrifying and the cast invests everything with a commitment whose genuine vibe is unassailable. Further, the evening is unabashedly romantic, not overly saccharine, but just committed to genuine emotion.

The first act closer depicts the couple, their band, their friends and family hand-marketing “Conga” with foot leather at skeptical radio stations, playing it at everything from Bar Mitzvahs to Italian weddings, until the number is the breakout success they hoped for.

Still, it’s the production numbers you’ll remember, thanks to an indefatigable dancing ensemble and a band including six Sound Machine veterans who deliver the clarion blare of brass and the rolling thunder of conga drums. The knife-sharp dancers swirl and dip and spin and pivot, throw white handkerchiefs in the air and catch them on the way down, perform electrified dance moves you may never have seen before on a regional theater stage.

Claudia Yanez played Gloria’s sister in the national tour and went on as the lead’s understudy 80 times. As a result, she slips into the role as if she was born into it. Her soaring voice knows every iconic twist in Gloria’s voice, but she has her own broad welcoming grin and twinkling scrunched up eyes.

Jason Canela is a drop-dead gorgeous hunk with a seductive expressive voice. But just like the other two productions, this one makes the error of being true to the fact that Emilio famously has never lost a very thick accent; there’s even a joke in the script. But once again, the director allows the actor to impose such an impenetrable morass that much of what he says is lost – a critical problems since many important elements in the narrative are disclosed by Emilio.

The cast has standouts such as Adriel Garcia as Gloria’s father whom she nurses through a fatal case of multiple sclerosis; Seth Trucks in the comical role as the music producer who starts out antagonistic and ends up a fervid supporter, and especially former Miami actress Eileen Faxas as Gloria’s mother. Besides her thrilling rendition of “Mi Tierra” on the cusp of the revolution, she nails the dramatic scenes in which she is estranged from her daughter and the husband she doesn’t trust.

The director is Andy Señor Jr., a Miamian who served as assistant director to Jerry Mitchell on the New York version. He propels the story at warp speed with some plot points getting lost in the torrent of dialogue. But he instills a precision and polish to this fluid production that rivals any earlier incarnation.

The choreography is supervised by former Miamian Natalie Caruncho who danced when the show bowed on Broadway to the breath-taking work of Sergio Trujillo, was associate choreographer on the national tour, dances in this production and is this edition’s associate director.

The set design is based in David Rockwell’s original, although it is even sparer here. The cast included the wonderful Alma Cuervo who played the abuela in New York. Several members of the ensemble also have danced in New York or on tour such as Henry Gainza, who appeared in many Actors Playhouse shows before moving to New York.

Credit, nay honor, is due Executive Producing Director Barbara Stein and Artistic Director David Arisco who have been planning this undertaking for years. At a time when outsiders might wonder if live regional theater itself is in danger, the Playhouse has doubled down almost literally on the financial investment that will shoot north of three-quarters of a million dollars. The regular cast has 25 actors including two children and swings, mostly Equity members, plus 10 musicians, plus an array of backstage support staff. At the curtain call, the array of performers crowded to fit between the ends of the proscenium arch and the leads took their bows alone at the back of the stage. Most of the costumes have been rented, but some were built locally and almost all had to be adjusted for the specific actors. The company rented additional lighting and wigs.

For 32 years, Actors Playhouse has labored with marginal success to attract a large dependable audience of Latinx subscribers by mounting a show every couple of years targeting that crowd. The efforts have ranged from a world premiere big-budget musical Havana Music Hall to the drama of Pulitzer-winner and local playwright Nilo Cruz. On Your Feet is the ultimate put-up-or-shut-up test case for whether LatinX residents truly want to support English language theater.

Covid Policy: Masks and proof of a recent negative COVID-19 test are required for entry. Guests may volunteer proof of vaccination in lieu of a negative test. Opening night, staff warned that they could not start the show until the audience was completely masked. 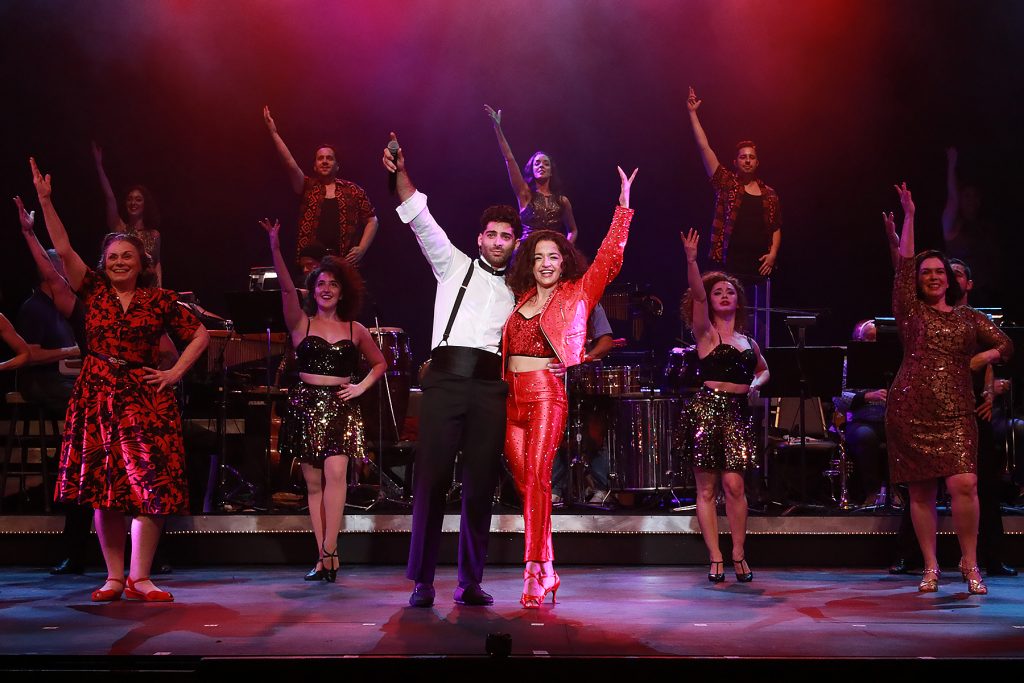