Posted on December 6, 2013 by Bill Hirschman 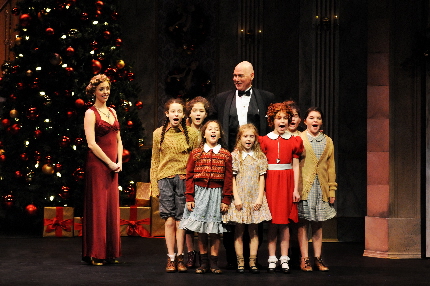 There are 29 shows opening or have opened already this month. That means reviews will only be in the top four positions for four days. To see earlier reviews, check out the red ribbon at the bottom of the page entitled “Reviews” or click the “Review” button in the white on teal strip.

The Maltz Jupiter Theatre’s sumptuous and skillful production of Annie resembles that strange holiday gift that you’re not quite sure how to react to. It’s beautifully wrapped and artfully manufactured but it’s missing the magic and heart you were secretly hoping for.

It’s as appealing and entertaining as its energetic gaggle of scruffy adorable singing orphans and as polished and slick as the gilded Christmas gift boxes in the finale. But aside from a few moments, it’s missing the sincerely affecting sentiment that makes Annie a fondly-remembered perennial.

More and more often – and with notable exceptions — the Maltz has become the place to find expertly executed even transitorily thrilling entertainment that rarely touches you or makes you think. Given the care and craft that goes into its sterling productions, perhaps it’s time that the Maltz sets out to conquer those two other aspects of the art form, even within the mainstream titles it chooses.

Director/choreographer Mark Martino’s program notes prove he understands that the 1976-77 classic has a heart: He rightly sees it as a resonating reaffirmation of optimism in tough times, although that only echoes faintly here, even in the first rendition of “Tomorrow.” Oddly, it’s only when Annie croons the tune in the second act with FDR’s cabinet as backup that it stirs something inside.

Further, when the gruff hard-shelled Oliver Warbucks has let Annie inside his defenses, she gently rejects his offer to adopt her in hopes that her real parents will return. He sacrifices his own broken heart and puts his resources toward fulfilling her dream. When this is done right, the audience’s throats should shut down and their tear ducts open. Not here.

The elephant in the room and on the stage is the performance of Vicki Lewis as the blowsy orphanage operator Miss Hannigan. Lewis was terrific in last season’s Hello Dolly!, directed by Marcia Milgrom Dodge, bringing a humanity and freshness that obliterated memories of Carol Channing and Gower Champion.

But it’s really difficult to assess what she has done here, either at the urging of or acquiescence of Martino. Her over-the-top performance is technically a marvel. On the other hand, it has nothing to do with the rest of the show. It’s an intentional choice that is broader than Lake Okeechobee. We’ll bet the dog playing Sandy chews a lot less scenery backstage than Vicki Lewis does onstage.

From the second she stumbles on stage in a sleazy chemise, black stockings and open robe, Lewis is a slatternly rapacious greed-head with a whisky-soaked voice, all so cartoonish that she would be out of place in a Three Stooges short.

Tapping a bottomless well of energy and comedic talent, Lewis’ loose-limbed body language features staggering with an unsteady gait, shaking her bosom at every possible opportunity (even when there wasn’t an opportunity) and hands fluttering in the air endlessly as if she had a spastic condition. Still, she knows how to snap out a curdling line with deadly topspin such as “I hate that kid so much I could be her mother.”

If there were any stops left to pull out, she does so with the equally unprincipled brother Rooster and his dimwitted moll (John Scherer and Elise Kinnon) in the gloriously venal vaudeville number “Easy Street.”

But over and over, it just seemed to be a performance from a different production, distractingly so.

As the title orphan, Clara Young is, of course, cute, adorable, winsome, all the right adjectives. It’s clear why she was cast. She doesn’t have Andrea McArdle’s once-in-a-generation clarion voice; hers is much thinner and it missed notes and pitches all night, but she’s so winning that no one cared.

Christopher Carl as Oliver Warbucks was the one person who nailed their role and the precise tone, from the tongue-in-cheek humor to the outsized bravura to the slight tinge of pathos.  Blessed with a classic Broadway baritone, he communicated warmth and affection in almost every number, notably the paean to Manhattan in “NYC.” He also had enough rapport with Clara Young to make such numbers as the ebullient “I Don’t Need Anything But You” a pleasure to watch.

Martino has proven in six previous Maltz outings, including last season’s The Music Man, that he has solid chops. His work here, besides the concerns already cited, is unspectacular but otherwise unassailable. Martino has said that there’s no need to reinvent the wheel when it’s such a sturdy well-made piece. He still adds personal touches like creating a silent prologue under the overture in which Annie’s parents drop her off as an infant as the front door of the orphanage.

The entire cast is rock solid down to the ensemble members who have as many as six roles each. Emily Ferranti lends a lovely voice and pure heart to the chief assistant and perfunctory love interest Grace, Barry Tarallo is a fine FDR without the cigarette holder, Mason Roberts is allowed to steal scene after scene with a kaleidoscope of reactions to Warbucks’ orders as Drake the major domo, and Julie Kavanaugh brings a Broadway belt to the Star To Be, although she puts an uncharacteristically and disconcerting jazzy spin to that solo in “NYC.”

The orphans were appropriately adorable and their every number won tumultuous applause opening night as if their entire extended families were in the audience. Their enunciation of the lyrics was spirited but pretty ragged. Don’t feel too bad, kids; the words are somewhat unintelligible on the original cast album from 1977 as well. But these pint-sized actors more than made up for it with verve and vitality, virtually stopping the show with their nose-thumbing reprise of “You’re Never Fully Dressed Without A Smile.” Take a bow Jenna McCoy, Emma Wallach, Juliana Simone, Olivia Henley Sophia Liano and Charlotte Krieger.

Macy the rescue dog brings previously unknown depth to the multi-layered character of Sandy. Actually, Macy was a bit stoic and stone-faced, but her appearance at the end of the show put a needed bow on the gift box. Macy had me from the word ruff.

A separate mention is due Paul Tate Depoo III’s evocative set designs so deftly executed by the Maltz’s carpenters, painters and tech team. The orphanage is a grimy cesspool worthy of a Florida DCF facility and Warbucks’ mansion is as elegantly grand as one of the hovels down the road on Hillsboro Beach.

Annie reaffirms once again that the Maltz has become a reliable brand name for solid entertainment; it’s just time to ask more of it. 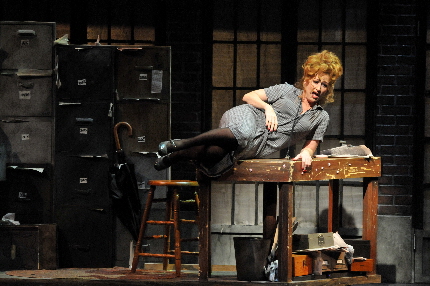