Posted on December 1, 2013 by Bill Hirschman 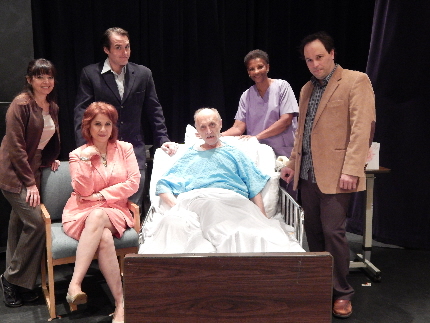 This portrait of The Lyons, one of 29 shows opening this month in South Florida, looks like a happy family, right? (Other than Kevin Reilly dying in bed). But this is the most dysfunctional family and friends you have ever seen this side of August: Osage County. Jacqueline Laggy, Jessica K. Peterson, Clay Cartland, Carolyn Johnson and Matthew Korinko make for a darkly comic group at The Women’s Theatre Project. / Photo by Carol Kassie

There may be 12 days of Christmas, eight days of Hannukah and seven days of Kwanzaa, but there are 31 days of theater in South Florida underscored by the coming week in which at least 11 shows are opening in addition to at least 11 already open and at least seven more are opening later in the month.

Just this week (check out our calendar for contact details):

Annie at the Maltz Jupiter Theatre (Dec. 3-22) – A serious drama about a woebegone orphan who is a victim of child abuse in a state institution, her mangy dog and a fascist bald-headed venture capitalist, played against the background of a failing economy and a socialist President’s attempt to shore it up with a welfare state. Starring as Miss Hannigan is Vickie Lewis who reinvented the title role in Hello Dolly! at the Maltz.

I Love You, You’re Perfect, Now Change at the Plaza Theatre in Manalapan (Dec. 5-22) – A relationship musical that is pretty much an unknown quantity – unless you’re one of the 149,000 people who applauded it when it played for months at a time in one of its many productions in the region. It’s undeniably infectious score will be delivered here by the talented Mia Matthews, Leah Sessa, Mike Westrich and now playing the older of the two men (he created the younger man’s part when the show first opened in the region) Wayne LeGette.

The Eight Reindeer Monologues at Kutumba Theatre Project at Galleria Mall in Fort Lauderdale (Dec. 6-13)  – Now 19 years old, believe it or not, this remains one of the funniest pieces of holiday theater. Vixen has accused Santa of sexual harassment. Now, all of the reindeer give their account of what they think happened…including Cupid, the openly gay reindeer, Blitzen, the militant lesbian reindeer, Dancer, the Jewish reindeer, Vixen, herself and many others. Directed by Kim Ehly and starring Sally Bondi, Casey Casperson, Lexi Gaeta, Noah Levine, Nori Tecosky Jessica Welch Kemmerlin and Bryan C. Wilson

The Santaland Diaries at Empire Stage in Fort Lauderdale – Almost as ubiquitous as It’s A Wonderful Life but hardly as sweet, this monologue about an acerbic martini-swilling actor paying bills as a department store elf is hilarious material by David Sedaris, this time starring Jamie Morris who has been responsible for the pop culture spoofs this year at Empire such as The Silence of the Clams.

Respect at the Boca Raton Theatre Guild (Dec. 5-Jan. 5) – Coming round again, this perennial favorite jukebox musical meant to encourage the empowerment of women gives all or part of 60 songs from the soundtrack of your life. Performing at Mizner Park Cultural Arts Center not Sugar Sand Park.

Making God Laugh at Actors Playhouse in Coral Gables (Dec. 4-29) – The title comes from the idea that if you want to make the Diety giggle, make plans. Thinking that you aren’t getting enough family togetherness during this month, the new comedy follows one typical American family over the course of 30 years’ worth of Thanksgiving, Christmas, New Year’s and Easter.

The Lion in Winter at Palm Beach Dramaworks (Dec. 6-Jan. 5) – Seriously, if you think you’ve got a dysfunctional family coming to visit for the holidays, don’t look for much sympathy from King Henry II (now Becket-less); his wife, Queen Eleanor of Acquitane; their three sons, Richard (later the Lionheart), John (later to plague Robin Hood and sign some obscure document at Runnymeade) and Geoffrey (who later founded the Beene shirt company); plus Henry’s mistress, the King of France and a few others.  This surprisingly funny historical drama is not especially historically accurate but it’s got one of the most witty and even touching scripts in the genre.

The Lyons at Women’s Theatre Project at Sugar Sand Park in Boca Raton (Dec. 6-22) — Well, if you want to give the Plantagenets competition in the dysfunctional department, you simply can’t do better than these Lyons. Nicky Silver, a richly acidic satirist known for The Food Chain, wrote this brilliant script about a wife and two grown children gathering in a hospital room watching the patriarch die of cancer – they can hardly wait. This is such a bracing play that it hasn’t been produced very much since its triumphant 2011-2012 New York production starring Linda Lavin. Gene Croft directs a dream cast including Jessica K. Peterson as the mother with Kevin Reilly, Clay Cartland, Jacqueline Laggy, Matthew Korinko and Carolyn Johnson.

It’s A Wonderful Life at Andrews Living Arts in Fort Lauderdale (Dec. 5-21) – A stage version of the classic about an ingrate and suspected Ponzi schemer who gets a bail out from the community, proving that there is still an economic safety net.

From Door to Door at the West Boca Theatre Company (Dec. 5-22) – Shari Upbin directs a comedy by James Sherman (Beau Jest) about the blessings and compromises that three generations of women encounter in their pursuit of love, faith and marriage.

The Book of Mormon at the Broward Center (through Dec. 26) — Good luck getting an orchestra seat unless you literally win the lottery they hold nightly.  To see our review, click here.

The Last Night of Ballyhoo at Broward Stage Door in Coral Springs (through Dec. 31) To see our review, click here.

Driving Miss Daisy at Delray Beach Playhouse (through Dec. 15)
My Son, The Waiter – A Jewish Tragedy — Miami Beach Stage Door at the Byron Carlyle Theater in Miami Beach (through Dec. 15) — Return engagement of one-man comedy play starring Brad Zimmerman that was held over and over for six months at the Coral Springs.

My Name Is Asher Lev at GableStage in Coral Gables (through Dec. 22) Superb and moving tale of a religious young Jew trying to pursue his artistic inclination in defiance of his family and his culture. To see our review, click here.

The Red Thread at Miami Theatre Center in Miami Shores (though Dec. 22) – A children’s fable with enthralling visuals and soundscapes to entertain the whole family. To see our review of the 2011 production by this company, click here.

Nunsense at the Showtime Performing Arts Theatre in Boca Raton (through Dec. 15)

Radio City Christmas Spectacular at the Kravis Center (through Dec. 8) To see our review, click here.

Madeline’s Christmas at Actors’ Playhouse in the Coral Gables (through Dec. 22) — The chuildren’s tale brought to life.

White Christmas at The Wick Theatre in Boca Raton — (through Dec. 25) Well-mounted production of the stage version of the movie musical, ending with snow falling on stage and in the audience.

The Game’s Afoot at Lake Worth Playhouse  (through Dec. 8)  –A whodunit with humor is set in 1936 when Broadway star William Gillette, renowned for his leading role in the play Sherlock Holmes, has invited his fellow cast members to his Connecticut castle for a weekend of revelry. But when one of the guests is stabbed to death, the festivities in this isolated house of tricks and mirrors quickly turn dangerous. T

Coming up later this month:

It’s A Wonderful Life at Arts Garage’s Radio Theatre (two shows Dec. 12) – Like its successful A Star Is Born earlier this fall, this troupe recreates a 1940s radio play version in front of the audience with ingenious sound effects, music and first-rate cast directed this time by Ken Kay.

We Will Rock You at the Arsht — A musical with a score composed of Queen’s Greatest Hits has never played Broadway but has been a monster hit in London and elsewhere, with an actual book by noted playwright Ben Elton.

9 to 5 at Broward Stage Door Theatre in Coral Springs  (Dec. 13-Jan. 19, 2014) — The musical based on hit movie about three secretaries getting revenge in a world class rotten boss.

Urban Apparel from The Project Theatre (Dec. 12-22) — Easily the most avante garde production, this local company is taking over an actual empty storefront at the real Ultramont Mall in downtown Miami, building it out with merchandise from actual stores (goods available for sale before, during and after the play) and using it as the setting for a site specific narrative play about the goings on at a hot hot hot retail shop.

The Nutcracker at Fort Lauderdale Children’s Theater (Dec. 20-21) – A play with music as opposed to the ballet.

Elf at the Arsht (Dec. 31-Jan.5) – Part of the Broadway Across America series, this is the seasonal musical based on the Will Ferrell movie. Unfortunately, there are two national touring companies and this is not the one with Florida’s Ken Clement as Santa. He’s up in Chicago.

To get a full idea of what’s playing and when, check out our calendar in the white on teal strip at the top of the page. And when looking for reviews, so many openings means reviews will only be in the top positions for four days. To see earlier reviews, check out the red ribbon at the bottom of the page entitled “Reviews” or click the “Reviews” button in the white on teal strip.