SantaLand Diaries Good For Seasonal Laughs, But Has Its Share Of Bah-Humbug Moments

Posted on December 7, 2013 by Bill Hirschman 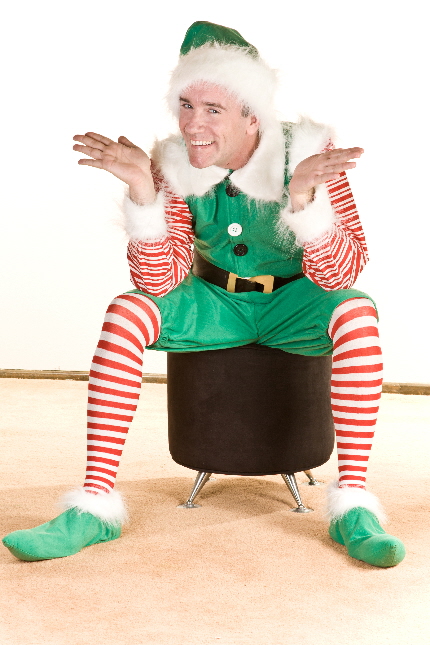 In stand-up comedy, there are a few rules of thumb: don’t make fun of the disabled and jokes about race usually don’t usually go over too well with audiences either.

While David Sedaris’ The SantaLand Diaries has its share of funny, when his script stoops low for laughs, he dashes all the other precious gifts he doles out in this very inventive one-person show. Yet there are reasons to see Empire Stage’s production of the adult-tinged, bah-humbug holiday theater tradition.

You can bet that some theater, somewhere, around this time of year is staging Sedaris’ monological diatribe. And so, for 2013, we get Empire Stage’s take on Diaries, a 70-minute tale about the intersection of Christmas and commerce, elf boot-camp training, parents on the verge of a nervous breakdown, snide Santas and caustic co-workers – basically these are the non-joy musings of an unemployed actor who takes a seasonal job as Santa’s elf Crumpet at Macy’s New York.

The SantaLand Diaries, since it was adapted for the stage by director/actor Joe Mantello in 1996 from a script based on Sedaris’ 1992 National Public Radio autobiographical essay, is becoming as much of a theater staple as It’s a Wonderful Life, although don’t expect as feel-good a message.

Truth be told, I was a Diaries newbie until Thursday night, so I went into the show with little to no  expectations. And, yes, Diaries has laugh-out-loud moments. In fact, one woman in Thursday night’s audience seated in front of me was so hysterical I feared she’d need a straight jacket. Contributing to this was the free wine Empire Stage has made part of their cheer (only a donation is required for the vino). Diaries is probably funnier if you have a buzz on.

Jamie Morris, who is becoming a bit of a regular at Empire Stage, and who recently staged and starred in two of his own penned production at ES, Silence of the Clams and The Facts of Life: The Lost Episode, takes on the role of David. The show is directed by Morris collaborator, Christopher Kenney, and is co-produced by Morris’ Bevnap Productions.

Morris is a crowd pleaser and the actor commands the audience with his own doses of small asides. A few technical glitches on opening night were handled with just the right tip of the hat by Morris – not overdone, but just enough to acknowledge the slight bumps.

Aside from those veteran handlings, his best moments were when he was interacting with the crowd (he was spot on in his selection of those he wanted to incorporate into the proceedings. Beware, if you sit in the front row or second row center, you will be a target!).

Perhaps his weakest moments were those that required nuance. There aren’t a lot of highs and lows here – it’s mostly just one note of sarcasm throughout, which can make the delivery monotonous.

The light cues don’t help to signal the passage of time or a change of direction, and there could have been a more definitive choice as to who the audience is “playing” on the other side of David’s storytelling. Are we family gathered at a dinner? Friends he’s made from his stint as an elf? Macy’s execs? Other wannabe elves?

Sedaris script is difficult for an actor for sure and a definite challenge. The commentary is sardonic and, at times, downright cruel – a take on disabled children visiting Santa has Crumpet warning Santa about a child’s missing nose or making sure Santa is aware of another child that has burns over (Crumpet stops to count how much) 90 percent of her body. Racial jokes include Black Santas and the lightness of their skin tones, plus requests for “traditional” Santas rather than “Chocolate Santas.” Sedaris skewers country folks, too, and dwarfs.

Morris keeps his Crumpet light, which is a breath of fresh air since this could turn into a 70-minute bitchfest if not handled with a bit of levity. But like any piece of theater an audience invests in, there should be a reason to rally with Crumpet. In the end, the elf has a small epiphany about the meaning of Christmas, yet in this Diaries, the warm and fuzzy remains unwrapped.

The simple set by Michael McClain, is bright and cheery with a large, red Santa chair and teddy bears and toys littering the makeshift Santa area at Macy’s. The use of two sides of the stage also works to create a sense of varied time and offsets reliance on center stage. Some technical glitches with sound and lights will be cleared up as the run continues, and kudos to Morris for not letting those fluster him.

Overall, audiences will find seasonal chuckles in Diaries (I base this on the woman who needed the straight jacket). Empire Stage’s The SantaLand Diaries isn’t all coal, it’s just more of a re-gift.