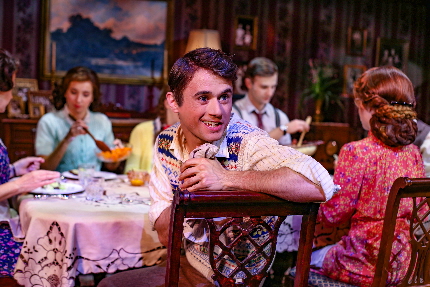 Home is the place where they have to take you in, to paraphrase Robert Frost. It’s also the place where every family dynamic plays out — love, resentment, growing pains, conflict, chaos, worry and secrets — as shown in the Maltz Jupiter Theatre’s superb production of Brighton Beach Memoirs, running through March 8.

Smoothly directed by J. Barry Lewis with a first-class cast of mostly South Florida actors, the Maltz production hits all the high notes of Neil Simon’s incisive script, first produced in 1983. Brighton Beach Memoirs is one of Simon’s autobiographical plays, part of his Eugene Trilogy, that also include Biloxi Blues and Broadway Bound. While each play in the trilogy features Simon’s quick wit, they also are his more serious comedies. Far removed from the broad comedy in his other plays such as Come Blow Your Horn, Brighton Beach Memoirs and the others in the trilogy finds its character-driven humor in a realistic look at family life and its daily challenges including dysfunction and economics.

The tight cast effortlessly maneuvers the pathos beneath the humor with each actor understanding the emotional vagaries of their characters. Despite its post-Depression/pre-WWII era, Brighton Beach Memoirs dovetails the concerns of families in the 21st century, including living pay check to pay check, how a war will affect the home front, extended family, immigration and bigotry.

At the center of Brighton Beach Memoirs is Eugene, the 15-year-old ebullient narrator. The affable Zambito earnestly delves into Eugene’s longings — his passion for baseball and his dream to be a writer though he isn’t quite sure how that will work. It will, of course, since Eugene is Simon’s stand-in. Right now, Eugene is dealing with the awkwardness that comes with being a boy on the cusp of puberty. His main goal is to see a naked girl. Eugene is a substantial role as he keeps the plot churning and Zambito excels in his Maltz debut.

Eugene is the center, but the heart of Brighton Beach Memoirs is the relationship between the sisters, Kate and Blanche. Turnbull and Lowe are two of the most skilled actresses in South Florida and their performances here again reinforces that. The sisters truly love each other, but this love also comes with baggage. Kate is weary at keeping the family together and can barely afford to show any emotion. Blanche equally is weary at being forced to live with her sister and family but having few other options. Lowe is almost unrecognizable as the plain Blanche, incapable of making a decision for fear she may be wrong; while Turnbull literally shows how the family’s weight wears her down, tired of being the one who makes decisions. When the sisters finally erupt at each other, it is a show-stopping moment by Turnbull and Lowe.

Hoffman’s quiet performance illustrates how Jack’s compulsion to support his family is affecting his health because he has to hold down several jobs to supplement his income as a garment district cutter. Rumblings of the war in Europe also prey on Jack’s mind, worry about his family overseas, anti-Semitism and how he will feed everyone if more relatives need a place to stay.

As Nora, Valdes channels her inner teenager for a persuasive interpretation of a 16-year-old with dreams of Broadway, who resents it when those plans are dashed and doesn’t understand the sacrifices her mother has made for her. Yet Valdes goes beyond the typical self-centered teen persona.

As the oldest Jerome son, Walton is equally on firm ground depicting a 19-year-old who isn’t quite a man and yet is no longer a kid. He wants to be respected and make a contribution to the household but his enthusiasm leads him to bad decisions. Lasanta is the sickly youngest daughter for whom getting another a glass water seems to exhaust her.

Anne Mundell’s effective two-tiered set perfectly captures a late 1930s/early 1940s home crowded with comfortable, plain furniture. Family portraits are proudly hung on the walls, showing the Jeromes’ priority. They can’t afford fancy art — family bonds are the decoration they need. Upstairs are the bedrooms with the sisters’ and the brothers’ rooms visible. Brooklyn’s city scape is outside the windows. The decision to have the radio going full blast even before the play begins works so well — furthering the feeling that the audience is at home in the Jeromes’ living room. A strip of land in front of the living room is where Eugene practices baseball and first breaks the fourth wall. Kirk Bookman’s calibrated lighting and Tracy Dorman’s period costumes further enhance the environment.

Brighton Beach Memoirs’ script is so solid that it seems foolproof. It isn’t. But the Maltz’s smooth production makes it seem as if this is a can-never-miss play. That’s because of Lewis’ almost invisible direction. The family is constantly in motion, whether sitting at the table or entering a room. When the sisters or brothers are in their upstairs rooms, they are quietly moving, showing this is an active household, even when the action is centered on the first floor.

One final note about an opening night incident that we hope will never be repeated. About 20 minutes before the conclusion, it was announced that the play had to be stopped because of a medical emergency. (Before we go any further, let me say that the lady who was ill is fine now) The cast quietly left the stage in mid-sentence. Kudos to the efficiency, concern and professionalism of the Maltz staff. Each member of the Maltz staff, from the fine ushers, the tech crew, the house manager, the marketing director and Producing Artistic Director Andrew Kato immediately swept into action. Kato made a couple of announcements informing the audience of what was going on and to please keep their seats. The terrific team of EMTs arrived and took charge, stabilized her and were able to take her out.
Once the emergency was over, the cast kicked into high gear without missing a beat and ended Brighton Beach Memoirs. That alone was worth the standing ovation.