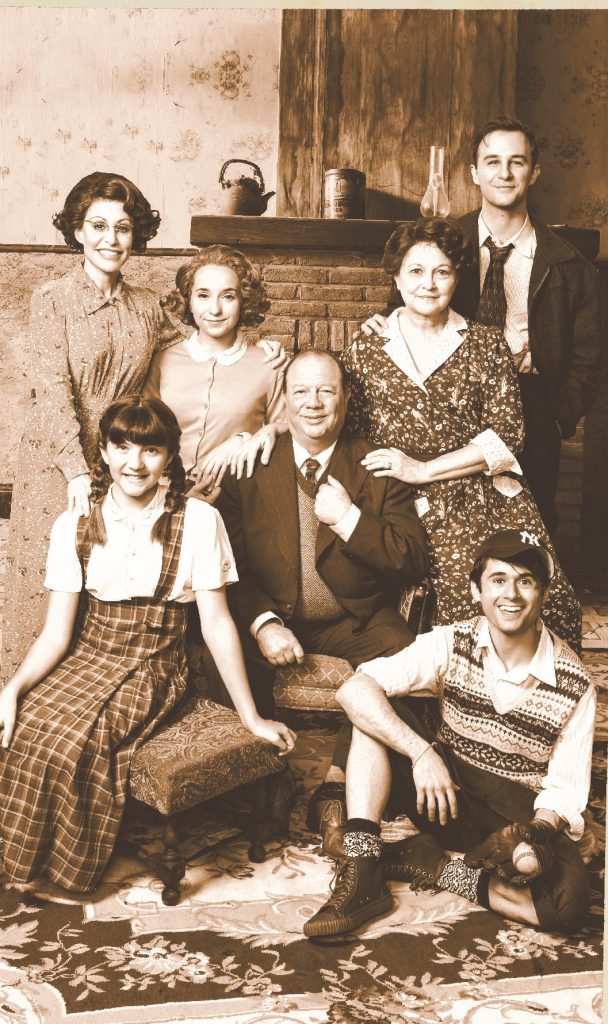 But within that first group, there’s a large contingent who have forgotten the specific quality of his post-Odd Couple, post-Barefoot in the Park, post Last-of-the-Red Hot Lovers period of work exemplified by the so-called Eugene Trilogy of Biloxi Blues, Broadway Bound and the first, Brighton Beach Memoirs.

There are plenty of laughs from the man who once wrote for Sid Caesar. But these semi-autobiographical works use the humor to leaven warm, serious character-driven pieces riven with pathos and a realistic depiction of family unity despite considerable dysfunction and socio-economic challenges.

To a degree, that’s what the cast and director J. Barry Lewis want you to remember when you come to see Brighton Beach Memoirs at the Maltz Jupiter Theatre Feb. 23-March 8.

“You say the words ‘Neil Simon’ and you think of a certain series of plays, styles, comedies, humor. But (people need to) come forward with a new perspective on what a Neil Simon play is, not just what you think.”

Veteran actress Laura Turnbull as Kate the mother, is optimistic about the audience. “Many of them, I suspect, know this piece…. So it’s not like they don’t know that Simon can write this kind of stuff. I’m just hoping that this, for some of them, this will be a refresher course on how fantastic and diverse he can be. Not just the punchline. There’s so much more to this. It has such a lovely storytelling capability about a family and a young man coming of age.”

The two agree the heart of the show is family.

“Whether it’s 1937 or this day, whether it’s Eugene O’Neill’s Ah, Wilderness in the 1940s or you’re looking at the family of August Osage County, all of these pieces are all about the family core unit and about the individuals struggling to find their voice, their identity,” Lewis said during the second week of rehearsals.  “It may be the simple conditions of burning the supper or” the aftermath of the great Depression. “It is exploring how they each are learning how to grow up and grow together and grow forward somehow in the world they find themselves in.”

Depicting life in Brooklyn with World War II closing in, the Jerome family is battling the persisting economic woes of the Great Depression and worried about family members endangered in fascist Europe.

The ebullient narrator is 15-year-old Eugene, a baseball fanatic dealing with the onset of puberty. Holding the family together is his long-suffering world-weary mother Kate. The father in failing health, Jack is a worn-out garment district cutter who holds other jobs all day trying to keep their budget afloat and then at night serves as the patriarchal font of warmth that Kate can’t always afford to indulge herself to be.

Their finances are stretched to breaking by housing Kate’s half-blind sister, the prematurely widowed Blanche Morton and her daughters, the lovely 16-year-old Nora who cannot wait to leave home to become a Broadway dancer, and 13-year old Laurie who is overprotected because of a heart condition. Eugene’s older brother Stanley is on the cusp of losing his dead-end job after he stood up for a colleague being abused.

Eugene, who will grow up to be Simon, acts as the audience’s tour guide, replete with a bottomless supply of classic Simon quips and punchlines. He is adolescent awkwardness incarnate with vague dreams of becoming a writer, but more interested at the moment in playing for the Yankees and seeing a girl naked.

This is a crowded environment of cauterized dreams in which intersecting lives sometimes bolster each other, other times cause serious friction threatening the unity of the group.

Turnbull, leading a cast of mostly local talent, expanded on Lewis’ vision: “It’s the family dynamics that make a family have issues within its unit, but that also create the glue that keeps them together. … We all have families and we all have different dynamics within that family. And we all go through really great, easy, happy times and we have all gone through not-so-great happy times that pull (people) apart and then brings them back together, and this play demonstrates that beautifully, I think.”

There is a universality people should be able to relate to, said Anthony Zambito who plays Jerome: “Even though it’s in a different time period, everyone can relate to interpersonal family struggles, whether it be the relationships within the family, whether it be growing up, coming of age, sexual awakening, like dealing with crises, financial burdens.”

The play marks a different tone that Simon had been toying with after plays that Lewis called “situational, they were boring, boy meets girl, boy loses girl…. (Then) he made a very specific choice to write the story about him, his family, the people that he knew best.”

Lewis notes the people involved with the original production were nervous because it didn’t follow the classic set up/laugh line paradigms. The reviews were mixed; the only Tony Awards it won were for direction and Matthew Broderick playing Eugene. Simon and the play were not even nominated.

Another element that people forget is that the stresses, the conflicts and the challenges cause the family to change and grow.

Lewis remarked, “Everyone is a different person than they were from the start of the play. And Simon takes you on this journey about not just Kate, not just the young boy, but everyone is being challenged to see themselves differently than who they are at the start of the play. And if we succeed in taking the right journey with Simon, I think we’ll find the audience will come away with seeing what it takes to and how difficult change sometimes can be emotionally, but if you’re willing to take the risk, there are rewards.”

While it is most obvious for Jerome, it’s just as true for Kate, Turnbull said.

In the beginning of the play, “Kate keeps everything running as smoothly as possible to hold the unit together. She’s in charge. She knows that things will work out….‘We won’t deal with it right now, but we’ll deal with it.’ She can keep trying to keep (her ailing husband’s) attitude positive. ‘You will figure it out. You’ll get other work somewhere.’ She can make sure there’s food on the table.”

But challenge and crisis follow challenge and crisis. “Then things start to shift and change for her, which I think she is surprised by….. Because it’s the one thing she has no control over…. I think it as Barry has said in rehearsal, that’s the straw that breaks the camel’s back for her. So suddenly she has to be very honest and she gets a little defensive and she gets on the attack road with her sister. And I think just like in real life, that if you have held it together for a long time, some days there’s that one thing that just pushes you over the edge and makes you snap, maybe sometimes not even at the people who deserve it. But it comes out. And later, you may go, wow, I should have handled that differently….I should have taken a breath, and maybe I wouldn’t have been so harsh.”

Indeed, the family’s coalescence in the crises is uplifting. Zambito notes, “The optimism that they all share in the community and the reliance and dependence like interdependency of them all is beautiful, especially the optimism in really hard times. How they can continue to live harmoniously as a family and family?”