Posted on November 7, 2012 by Bill Hirschman 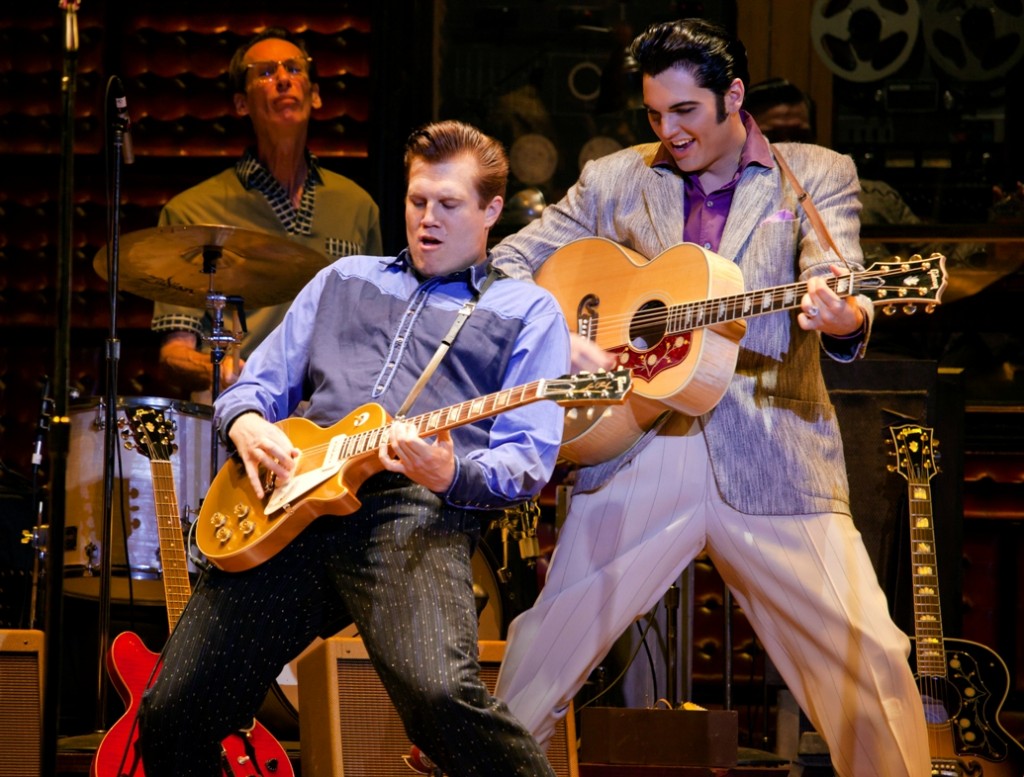 Lee Ferris as Carl Perkins and Cody Slaughter as Elvis Presley in The National Tour of Million Dollar Quartet / Photo by Jeremy Daniel.

The roots of rock and roll are encapsulated in Million Dollar Quartet, a rollicking yet poignant musical about one historic night in Memphis when four country boys turned icons sang and played their way into history.

Million Dollar Quartet transports its audience to December 4, 1956 to the Sun Records studio in Memphis, the one and only night four giants of rock and roll jammed together at the place where they each got their start. Elvis Presley, Johnny Cash, Carl Perkins and Jerry Lee Lewis were each at different stages in their careers and on that night: Lewis, on the cusp of his stardom; Perkins, at the crossroads of his career; Cash, solidly successful and looking for a change; and Elvis, the undisputed king of rock and roll.  But no matter where they were in their professions that night, they were just good ol’ country boys hanging out with the man who discovered them, Sam Phillips, the founder of Sun Records.

But Million Dollar Quartet is not just a revue of classic rock ‘n’ roll and rockabilly songs.  In addition to the stars’ egos and rivalries, Philips is on a deadline for a big decision: Leave Sun Records and join music powerhouse RCA, or keep his cottage operation in business. That conflict is the crux of the show, the selling out of rock and roll.

The ensemble does a stunning job of capturing the musical essence of Elvis, Cash, Perkins and Lewis.  Lee Ferris wears Carl Perkins’ trademark blue suede shoes, the most famous footwear in music.  Ferris portrays Perkins, probably the least well known of the group, as an angry young man anxious to reclaim his fame, and gets the crowd going with hits like “Who Do You Love?”

Scott Moreau, wearing Johnny Cash’s traditional black garb, is gifted with a deep rich voice perfect for Cash classics such as “Folsom Prison Blues.”  Martin Kaye sports Jerry Lee Lewis’s curly blond pompadour, and portrays the killer piano player as a boastful man of faith conflicted by his love of what he calls the devil’s music.  Kaye rocks the house with the Killer’s classic “Great Balls of Fire” and “Whole Lot of Shakin’ Goin’ On.”

Cody Slaughter, who plays Elvis Presley, probably has the hardest job, portraying a man whose every sneer has been documented.  Slaughter delivers Elvis’s swagger, his passion and also his vulnerability, doing the king proud with his rendition of “That’s All Right” and “Hound Dog.”

Christopher Ryan Grant is excellent as Sam Phillips, the father figure with an uncanny ear for talent.  Grant is the driving force of Million Dollar Quartet, and while his role isn’t as showy as the other actors, he is the heart of the story.

We all know the “after” picture.  But Million Dollar Quartet is the “before” picture— before the scandals, before the legends, before the commercialization of rock and roll.

This entry was posted in Performances, Reviews and tagged Broward Center for the Performing Arts, Million Dollar Quartet. Bookmark the permalink.