Posted on December 9, 2016 by Bill Hirschman 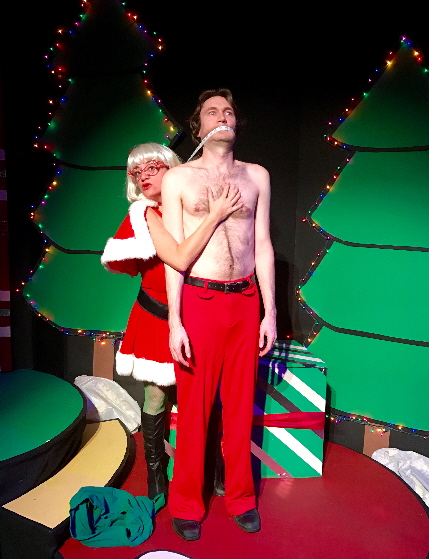 Like the requisite ballet’s presentation of The Nutcracker, theater troupes have been turning over their Decembers as of late to holiday-themed plays: David Sedaris’s Santaland Diaries comes to mind. Unlike the wholesome Nutcracker many modern Christmas offerings are aimed at an adult crowd, taking the Ho, Ho, Ho of the holiday to a more mature level.

It’s a welcome respite to the Hallmark holiday movies and family fare. At Fort Lauderdale’s The Vanguard Sanctuary for the Arts, Thinking Cap Theatre has compiled a group of what they propose as New Seasonal Short Comedies to Help You Cope with the Holidays.

This coping strategy comes in the form of nine 10-minute plays, which take on subjects that range from what really goes on in the break room with a mall-store Santa to an oversexed Mrs. Claus interviewing a would-be Elf for more than a job in her husband’s toy workshop.

All of the nine playwrights featured have a South Florida connection and were selected from a group of plays after a call for submissions for the holiday-themed Mixed Nuts. Four capable and versatile actors, Michael Gioia, Carey Hart, Noah Levine and Gretchen Porro, play over 40 characters in the course of 90 minutes.

First up, Marj O’Neill Butler’s Seasonal Work, stars Thinking Cap Theatre regulars Levine as an elf on a job interview and Porro as a naughty Mrs. Claus. She’s “sizing up” the latest candidate in an onsite interview that would make any human resources manager cringe at the possibility of a sexual harassment suit. It’s a mature take on the old-school story of Santa’s little helpers. Levine plays the elf with a wide-eyed naiveté against Porro’s no-holds barred, fishnet-stocking clad Ms. Kringle. It’s a rousing opener to get Mixed Nuts off and running.

Magic Wand by Gioia, who also stars in the play, is more serious in nature. It concerns a widowed Dad in his twilight years whose life just hasn’t turned out the way he imagined. He’s walked out on his security guard-turned-mall Santa job and is ruminating overall on where his life took a turn. Gioia’s play rings true in current times especially with the news of where middle-class America has found itself in the latest economic climate. Porro plays the understanding daughter who tries to make things right for her father. It’s a heartfelt and touching portrayal by the two actors.

Michael Yawney’s Sugar Plums doesn’t really hit its mark despite the give-it-all performances by Hart and Levine. Hart plays a ballet diva who has been dropped on her head during a performance of The Nutcracker by her dance partner (Levine). The wiry Levine throws caution to the wind as he twirls and spins (in a very short robe, mind you) as the professional dancer who tells his story as to how he “dreamed to dance.” Hart stands her ground as the diva who has no sympathy for amateurs

The first-act closes with Porro dressed in overalls as a second grader reading her assigned report to her grade-school class “Is Christmas a Commercial Holiday? An Oral Report by Susi Kirkland.” Playwright Leah Roth Barsanti posits that view through the eyes of the second grader who believes that Christmas’ commercialization has turned people into “whores” – case in point, an actress whose reputation goes down the tubes after she takes a job in A Christmas Carol, a congenial Santa who believes he really is Saint Nick and has been placed in a prison’s mental ward, and a Hooters waitress who has created a work-uniform debacle for her co-workers after appearing in the December calendar shoot.

The second act is just as rowdy with Greg Waters’ Dear Santa about a Doritos-eating mall Santa (Goia) who reads kids’ letters to Santa, only to share his cynical view of the world based on their requests. His cynicism carries over to discussions with his gay co-worker, a journal-toting elfin sidekick, played by Levine. Meanwhile, the sloppy Santa is getting called on the carpet by his employers who are watching him a la Big Brother as he chows down on Doritos and stains the store’s white gloves. One of the wittier plays in the collection, it’s a great bookend to the first act opener.

Two moms performing in their community’s Christmas pageant are at the center of Baby Break by Jessica Farr, a realistic play that takes a slice of life look at motherhood. Porro and Hart discuss different challenges while on a smoke break in the middle of the production. Their ruminations include the dilemma of what to do when your seven-year-old starts to explore her body using her mother’s back massager.

Ann Gillespie’s Infamy, one of the more introspective pieces, is about two college friends, Levine and Porro, who meet at a Miami Christmas party, rehashing what happened 14 years ago when they lived in Columbus, Ohio. Their lives have changed, but he still harbors resentment. Yet, it’s more about his own self-perceived failures than what she’s actually done. “How did you get to grow up?” he says, with the inference that he’s still stuck in the past. This more serious of Mixed Nuts is a worthy dramatic break from the humor that is more of the throughline of the selections.

Casey Dressler hits the humor jackpot in her riff on the Witches of Eastwick with the Witches of Christmas, a parody of sorts of the fascination of all thing wizards and witches (J.K. Rowling be damned). Witches of Christmas finds Gioia, Levine and Porro as a secret society who have hung up their brooms, but now need to come out of hiding to help Santa save Christmas. Levine’s witch is a stuck-in-the ’60s guitar player who would rather stay focused on playing in his cover band than going back to cooking up potions; Porro’s witch, a Valley Girl-esque do-gooder, is the leader of the pack, trying to coax the other two back into action. Gioia is more wizard than witch, speaking in an ancient tongue that sounds as if he’s read too much Shakespeare, only to reveal in a slip that his Elizabethan tongue is as fraudulent as the magic these witches possess. Are they really witches or just three off-their-rocker pals who have convinced themselves and each other they have the power to save Christmas? This is one of the most creative efforts in the collection.

Dressler also had a hand in curating the play selection. Bravo on both accounts.

Lastly, we get a glimpse into New Year’s Eve as two sisters, played by Porro and Hart try to increase their luck for 2017 by participating in a ceremony The Twelve Grapes of New Year’s Eve. Writer Joanna Orrego has created some fun and nifty rituals that make you almost want to try out the routine for yourself – gather 12 grapes, wear a certain color of underwear, hold a suitcase and spin around a few times. Well, you get the gist. There’s the typical sibling squabble, too, over who deserves to have a better 2017.

Stodard’s direction pulls it all together in one cohesive, cozy package and a simple set accented with oversized gift-wrapped packages by Alyiece Moretto. Lighting design by Eric Nelson keeps everything warm and festive.

Mixed Nuts is light and fluffy holiday fare – even the serious stuff doesn’t go too deep –  and just the right mix to produce more than a few belly laughs.

Mixed Nuts by Thinking Cap Theatre at The Vanguard, 1501 S. Andrews Ave., Fort Lauderdale, 8 p.m. Thursday, Friday, 4 and 8 p.m. Saturday and Sunday, through Dec. 11. Running time 105 minutes including a 15-minute intermission. Free ornament after the show while supplies last. Tickets are $35 at 954-610-7263 or www.vanguardarts.org.