Commitment Makes Up For Spectacle In Outre’s Tommy

Posted on December 8, 2016 by Bill Hirschman 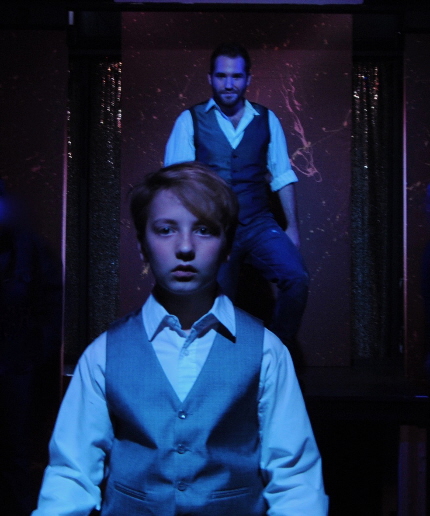 Young Carsten Kjaerulff and the older edition Mike Westrich are both the title hero in Outre Theatre Company’s Tommy / Photo by Shannon Ouellette,

The musical theater version of The Who’s Tommy likely never has been mounted in a space the size of a large living room instead of a 1,000-seat venue, with 13 actors rather than 24, with a digital recording rather than a pit of live musicians, with the barest of production values as opposed to the pyrotechnic multi-media spectacle usually used to enhance the piece.

But Outré Theatre Company has a history of taking on daunting challenges if the piece connects deeply enough to its mission. Sometimes the effort misses the mark; but other times it scores solidly as it does here, demonstrating how skill, imagination and pure guts can triumph over the most modest of means.

Its greatest virtue in bringing the classic rock opera to the postage stamp stage of co-producer Showtime Performing Arts Theatre is a total, laser-focused tsunami-strength commitment of the Outré team headed by director Skye Whitcomb and assistant director Shannon Ouellette.

It is obvious in every performance from Mike Westrich’s smoothly concentrated title character to Eytan Deray’s opportunistic sadist Cousin Kevin to Sandi Stock’s horror show gothy Acid Queen, frankly down to every member of the ensemble tripling and quadrupling in parts. It’s even evident in the amazingly consistent stillness of 11-year-old Carsten Kjaerulff as the traumatized young Tommy.

Audiences will benefit if they have never seen the show in its extravaganza mode so that they don’t miss the glitz and glitter by comparison. (Most of the scene setting is done with Guy Haubrich’s projections of photos above the stage.) But that allows patrons to concentrate on the story and the lyrics. Besides, having the action play out literally 18 inches from some audience members is about as immersive as you can get.

We won’t waste space on the plot; anyone over 60 plays the album at least once a year and made sure their kids heard it growing up. But the musical theater version, which includes a new number for Tommy’s parents and some other fresh passages, inserts a clearer story line — until the finale which is now so confused as to be open to heated debate.

With virtually no space to work with except a short runway into the audience, Whitcomb does a good job keeping the stage pictures from being static. But even more impressive is how choreographer Jerel Brown (a frequent Slow Burn Theatre Company performer) stages satisfying dance numbers without communicating the feeling that the dancers are cramped or constricted.

The company seems to have learned from its last production, The Normal Heart, not to lose a lot of time trying to change scenery.

To be honest, while all but one actor have surprisingly strong voices well-matched to a rock score and deftly molded into melodic harmonies by musical director Caryl Fantel, some of the demands of music flies outside some singers’ upper range or their voices are not supple enough to slip into those notes.

But there is no asterisk about the performance of Westrich whose steady voice infused with an emotional intensity has graced everything from the free spirited Berger in MNM’s Hair to the cold calculating killer in Outre’s Thrill Me to the filmmaker in Slow Burn’s Rent.

Like Slow Burn Theatre, Whitcomb with former partner Sabrina Lynn Gore has provided over the years a place where fledgling thespians and underemployed professionals can develop their craft. While the skill level often ranges across the spectrum in a single production, their joy and that commitment make it worth taking a chance on Outré.