Musical Boca Bound Is Totally For Condo Dwellers It Portrays 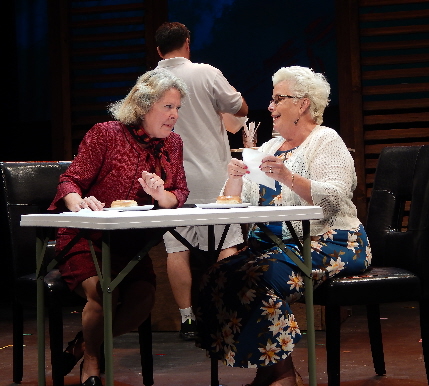 We’ve often referred to the Hirschman theory of the Theater of the Recognition: A work that lands with an audience because they recognize themselves up there on stage.

While this is true of the best works of Shakespeare and O’Neill, it is especially effective with audiences of “minority” groups such as Jews, blacks, Hispanics and gays. Undemanding, even half-baked shows elicit peals of laughter and applause when someone issues a catchphrase or cites a cultural touchstone.

At the late Broward Stage Door which often mounted Jewish-themed comedies, a character only needed say the word “Oy!” to elicit hearty laughter. But undeniably, patrons felt they got their money’s worth even when the work’s quality was debatable and audience members from other cultures were barely amused.

Which brings us to the world premiere of the musical Boca Bound from White Ibis Productions, renting space at the Wick Theatre, written by, about and for well-heeled senior residents of what is called here a “country club.”

This story of seniors re-examining their past and trying to move forward summons up a raft of adjectives intermittently applicable at varying times: cute, charming, funny, and yes, quite likely entertaining if you happen to be a senior condo dweller living in South Florida. It’s also predictable, not terribly subtle, clichéd, not especially engaging and wouldn’t succeed anywhere else other than the Tampa-St. Petersburg condo circuit.

But the opening night crowd (the entire one-weekend run has already sold out) fit the target audience. Some reportedly were neighbors of the bookwriter Bonnie Logan and composer-lyricist Richard Peshkin who sought to write a musical about the world and people they knew.

To wit, the audience taking in a tango production number, “Golf’s A Bitch,” began to clap and chuckle loudly when someone wrestling to become proficient said “I wish I’d taken up tennis.” Or when one character pointed out a resident, her observation, “He lost a bundle to Madoff” elicited knowing murmurs from the patrons.

But the humor that really landed was the well-observed character types: the perpetual kvetcher who complains the buffet has run out of poppyseed bagels when there are 15 other kinds left, the busybodies, the resident who stuffs food into her purse, squabbling canasta players, silly feuds between cliques, the childless, those struggling with their adult children.

Everyone’s favorite: grievance committee members enforcing the silliest association rules and whose most feared punishment is confiscating the transponder that allows residents to bypass the public access line at the security gate.

The story finds retired workaholic New York lawyer Nadine (Neva Rae Powers) being wooed by her life-long best friend Gert (Missy McArdle) to move into The Vintage Club. She is estranged from her grown children for whom Gert acted as a substitute mother while widowed Nadine worked. The ebullient Gert serves as her tour guide to life in the community, starting with the opening production number, “It’s Boca, Baby” which includes the line “Beverly Hills / South Florida East…. Where living it up is the Golden Rule.”

The plot is pretty foreseeable; its construction is straight out of the Broadway comedy manual. You know at least two sentences before someone will break into song. For instance, a talent show is announced for five weeks hence and you automatically know that’s where the climatic reunion scene for a troubled family will play out. The dialogue is ridden with clichés and well-worn tropes, although Logan has come up with funny one-liners and her eye for telling details of the environment around her is quite observant.

Peshkin is a retired medical doctor who has written songs throughout his life although without much commercial success. His playbill bio cites his influences as Burt Bacharach, Carole King and Jimmy Webb. And, indeed, his score from the peppy upbeat numbers to the inner monologue ballads sound like someone reverently inspired by Bacharach’s musical Promises, Promises and his Top 40 pop ballads of the ‘60s and ‘70s.

This is furthered by the vocal arrangements of musical director Michael J. Moritz Jr, but especially the truly admirable arrangements for the smooth eight-member band by assistant musical director Jon Ranger including the signature Bacharach trombone, muted trumpet and driving percussion — the best facet of the entire show.

Peshkin’s lyrics are adequate in the comedy numbers, but the rest are so prosaic and predictable that you can finish the rhyme in a couplet even before the singer gets to it.

Frankly, none of this would work at all without the 12-member cast under Larabee’s direction. They never wink at the audience to acknowledge the quality of the material. They have well-honed comic timing and invest themselves into the heartfelt ballads.  Most have fine voices like Powers who calls on decades of experience performing around the world to credible deliver lyrics like “the clock never runs out on a dream.”

But the standout is McArdle who is equally persuasive in her musical numbers, her delivery of the humor and her inhabiting the quiet introspective moments.  A veteran of South Florida theater with a proven track record for drama, comedy and musicals, McArdle hasn’t been cast much recently and her work here illustrates that this is our loss.

McArdle has a rich voice that embraces whatever music and the lyrics are thrown at her, whether it’s the plaintive introspective “A Better Me” or her Merman-esque belt on the comic “I’m In A Pickle” which stems from being threatened with punishment because she touched a pickle.

Others in the cast include Gail Byer as the chief kvetcher, Steve Carroll as Nadine’s handsome love interest, Phillip Chaffin as the club’s smiling-through-the-member-abuse major domo, plus residents and other characters played by J.R. Coley, Justin Figueroa, Janna Morrison, Peter Librach, Troy J. Stanley, Ashley Wilcox and Coleen Pagano who doubles as the dance captain for Michelle Petrucci’s modest choreography.

The producers (Peshkin and Logan’s spouses) have spent money on out-of-town talent and modest but well-executed production values such as Penelope Williams’ flowing outfits for the women, as well as David Palmer’s projections of a kind of stage-width abstract art you’d find in a resident’s living room, which dominates the simple roll-on set pieces like tasteful furniture.

Look, this is what it is and it is what the creative team wanted it to be. It’s long at 2 ½ hours but its unassailably heartfelt. There will be a lot of people who will just kvell over this work. But it will help if it’s your life you are seeing up there.

Boca Bound will run through Sunday from White Ibis Productions as a rental from the Wick Theatre, 7901 N. Federal Highway in Boca Raton. The production is sold out, a portion of the proceeds from tickets sales will be donated to The Pap Corps, a cancer research organization.