Wiesenthal Challenges Us To Prevent Tragedy Once Again 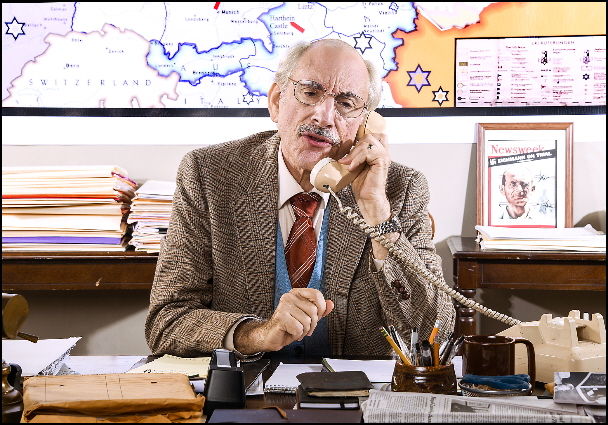 The resonance is deafening.

Over and over, Simon Wiesenthal’s words spoken in a biographical play written a decade ago based on a man who died 14 year ago, words about events that occurred more than 75 years ago, those words are as vibrant and relevant a direct undiluted challenge to the audience at GableStage in 2019 as anything heard this season in a political rally or debate.

In the one-man show Wiesenthal, the famed Nazi hunter describes the run up to the Holocaust and the ensuing horror, unequivocally warning “If we do not honestly try to understand how it happened then, it will happen now.”

By describing how everyday people were manipulated into  –ripe for — sanctioning, abiding, even supporting evil, this stage Wiesenthal focuses on the lesson he learned confronting the seeming sadistic psychopathic monster Adolf Eichmann before a trial. He discovered a banal-looking bookkeeper. Wiesenthal says, “The uncomfortable lesson for humanity was this: ‘If an average man is capable of such terrible things…then so am I.’ Humanity was forced to look into the mirror.”

That aspect is what makes this already familiar story of tragedy, replete with mind-numbing numbers and individual horror stories, so powerful and well worth revisiting.

Much-honored actor David Kwiat, directed by the veteran Gail Garrisan, makes credible the seeming contradictions of man who had not only lived through hell and relived it daily in his dogged pursuit of its demons, yet who takes joy into injecting wry droll humor and a glow of life in relating an encyclopedia’s worth of stories.

With self-effacing jocularity, he introduces himself “I have been called The Jewish James Bond. However, martinis give me a headache. And instead of an Aston Martin I drive an old Peugeot. Today you will hear Simon Wiesenthal’s greatest hits.”

But he smoothly turns the tone to the profound: “It is not my goal today to produce tears. If that is what you want, you should go home and watch soap operas. What I wish to produce is knowledge – knowledge of the horror and an awareness of the danger.”

Tom Dugan’s script that he performed himself for a decade is set on the day in 2003 that Wiesenthal closed his Vienna Jewish Documentation Center. Wiesenthal walks a last tour group through what he witnessed and what he has done since.

Especially notable is how his justifiable hate is banked; his long-term passion, which rises as he seemingly re-sees the stories he is retelling, is reined in with rational thought and a larger deeper view..

For instance, “For me, the Holocaust was not only a Jewish tragedy, but a human tragedy. After the war, I urged Jews to speak not only of the six million, but of the five million others killed as well; this made me unpopular. But for me whether it is Christians being thrown to the lions, ethnic cleansing in Yugoslavia, or this new tragedy unfolding in Darfur, we must speak of all genocide to prevent all genocide. Gypsies, Soviets, Poles, Slavs, homosexuals, Jehovah’s Witnesses… 11 million people who don’t come home, who didn’t fit into the Nazi mold of “racial purity” murdered.”

He rejects oversimplification, noting that some Jews committed murder for the Nazis and some Nazis killed no one and even fought against the killing. “Listen, all of my life I have rejected the idea of collective guilt…  It is individuals that must be held to account for their actions.”

And that charge is laid at our feet repeatedly, especially in the last moments of the play which has depicted his efforts on his last day in his office to bring one more murderer to justice.

“Maybe on this, my last day of work, I can see to it that Alois Brunner soon hears the same knock on his door that my mother heard. Maybe this I can do. Maybe if I can do this final thing, I will not be ashamed to go home.”

He wants us to recognize the inherent weakness in humanity. He quotes one killer, “I had nothing against the Jews. We only wanted their money…. All that racial business – the humiliation, cruelty and hate propaganda – that was just to condition those who actually had to do the killing. But I never hated them. It was a matter of my own survival and so I went along with it. But it wasn’t easy for me either. I was under a lot of pressure to produce. Himmler ordered that there should be no evidence. But eventually fountains of blood began spouting from the ground. It was a logistical nightmare for me. “

Again, Kwiat and Garrisan make this evening something palatable by making Wiesenthal good company: often he is a gentle slightly stooped grandfather with a warm smile, animated body language, blue eyes that pop out and someone who clearly revels in telling stories. Yet Kwiat is perfectly capable of depicting an intensely horrified Wiesenthal as he descends back into the depths of some memories including his ordeal in a series of concentration camps and his liberation.

Physically and vocally crumpled in a corner, he speaks of staying on in Europe rather than emigrating: “Why then, why did I need to be here, in this War Crimes Office?  I suppose I wanted to be Exhibit A – a living witness to the torture and killing. However, more than anything else, as these SS supermen tremble in the face of justice, I want them to know that I am watching.”

Kwiat, who recently retired as an educator at New World, has amassed one of the most enviable string of performances in the region. One-man shows are not unknown, such as his physicist Richard Feynman in QED for GableStage. Most recently, he was the husband in GableStage’s The Children, but among his stellar work was the Carbonell-winning turn in Zoetic Stage’s The Caretaker.

Again, Artistic Director Joseph Adler has entrusted the reins to Garrisan who helmed the lacerating Actually last season. She has deftly but subtly staged and paced the work and varied its tone to keep the 90-minute journey engaging even when the subject matter is harrowing.

Kwiat will present an evening reading his original poetry at a free event at 730 p.m. Oct. 1 at GableStage. Free admission, no reserved seating.