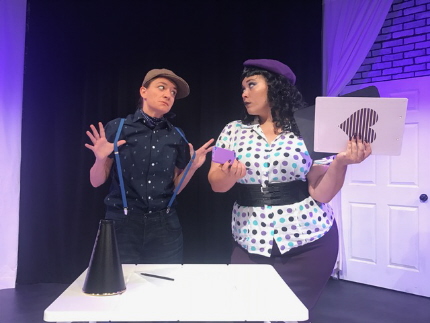 Before the 2017 Women’s March on Washington with tens of thousands of pink Pussy Power hats propped atop the collective heads of protesters as a symbol of solidarity, Jen Silverman wrote Collective Rage: A Play In Five Betties.

Thinking Cap Theatre is presenting the Southeastern premiere of Silverman’s play, which received its premiere at Washington, D.C.’s Wooly Mammoth Theatre Company in 2016.  It is only the third time the play has been produced, having had a West Coast debut in March at Boston Court in Pasadena, California.

Nicole Stodard, producing artistic director of Thinking Cap at Fort Lauderdale’s The Vanguard Sanctuary for the Arts, selected the play and is directing what she affectionately calls “The Bettys.”

The story concerns five broadly caricatured Bettys whose New York lives intersect. Silverman’s casting notes describes her characters this way: There’s a rich Betty. She’s Betty Boop 1, uptight, and fueled by a secret rage; Betty Boop 2, also rich and uptight, is coming undone; Betty Boop 3, Latina, charismatic, is a bit of a know it all; Betty Boop 4 is a butch lesbian, often ignored, and gently melancholic; Betty Boop 5, is also a butch lesbian, but just out of prison, and owns a hole-in-the-wall boxing gym.

“When it premiered at Wooly, the time frame was that we were in the throes of presidential campaigning, and pre-election, and pre-Trump’s comment about the P-word,” said Stodard, sipping a soda at Brooklyn Water Bagel, a few blocks from the theater just before a rehearsal for the show.

Stodard is referring to the audio recording from 2005, which featured then Republican presidential nominee Donald Trump making lewd comments about women, where he was taped saying he could grab women “by the pussy” because he was a celebrity.

“I really don’t know how Silverman ended up writing a play that was so spot on with what was happening within months of this play, and now post election, it couldn’t be more relevant,” said Stodard.

How women are perceived is what led Silverman to write Collective Rage, whose complete title is Collective Rage: A Play in Five Boops; In Essence, a Queer and Occasionally Hazardous Exploration; Do You Remember When You Were in Middle School and You Read About Shackleton and How He Explored the Arctic? Imagine the Arctic as a Pussy and It’s Sort of Like That.

Stodard references her own conundrum with titles — last season’s “A Public Reading of an Unproduced Screenplay About the Death of Walt Disney,” which wasn’t a reading at all. “Play titles, they are a tricky thing,” Stodard joked.

But back to the Bettys. “The loose inspiration for the play is the sexualized animation of Betty Boop,”

There’s a further explanation and deeper investigation, according to Stodard. “In the early 1930s, this cartoon was created and this character has really never left us. She re-emerged with (Jessica Rabbit) in Who Framed Roger Rabbit — the kind of idea of the pin up, Betty Page, and now there’s this resurgence of this look of the old Hollywood pin-up girl. So what does that mean, and how is she appropriated and approved by the public?”

But, Stodard said, there’s a flip side to Boop. “Somehow she manages to escape unscathed. No one takes her Boop away. Her sex is her power and her imprisonment, and as far as we think we’ve come in 2017, have we really? The play raises a lot of questions.”

There’s no doubting Stodard’s commitment to keeping the mission of her Thinking Cap Theatre “to create theater that explodes with thought!” despite the plays she produces being a bit off the grid.

“I think over the course of our seven years in existence our mission is about works that take risks formally, not just works that have some social consciousness angle to them. We haven’t, year after year, hammered at gender issues, but this year our entire season is about gender.”

She’s aware of the risk in producing a play in which she feels the need to forewarn her mother about some of the “uncomfortability” audiences may experience. “I called her yesterday and I said, ‘I just want to talk to you a minute about what this play is about.’ I mean, my mom has seen everything, and I mean everything, we’ve done.”

Stodard cautioned her mother that the word “pussy” is used in the play over and over again. “I started counting at one point and it exceeds the double digits, and it will be very oft putting to some people, but in many ways the use is meant to desensitize.”

It was exactly the response the director wanted. “I told her, yes, you find that vulgar, you and how many other women and men. And I said, let’s investigate why.”

There was an exercise she did with her cast of five women, who include familiar faces on South Florida stages, Ann Marie Olson, Betsy Graver, Vanessa Elise, Gretchen Porro and Carey Hart, all of whom have been seen in a Thinking Cap Theatre show at one point or another.

Stodard said she and the cast went through the history of the word from “point of origin centuries ago and all the ways the p-word has been used”: As a pejorative for a gay man, as a term of endearment, as reducing women to just their female genitalia. Then all the way up to the march on Washington. “You start a whole movement — Pussy Power. And you take the power away from the oppressors and you take back the power.”

Yes, Stodard admitted. Sometimes her choices for her theater are “terrifying” for the director. “But what’s worse is staging the same play for the nine millionth time, or doing the most produced plays ever. I love a lot of classic plays, but if we’re going to do that it’s often an adaptation or a new approach to the work.”

Eloquently and succinctly she summed up The Bettys, and the other edgy works that makes Thinking Cap one of the most daring, and dedicated, theater companies in South Florida.

“Part of it is to try to figure out how to keep theater relevant and connected to our world as it continues to change.”