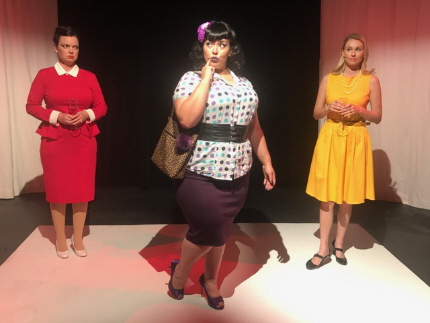 Trump may have paraded his demeaning objectification of women by using the word pussy, but it’s a word celebrated over and over and over again in Thinking Cap Theatre’s production of Collective Rage, A Play in Five Betties.

Playwright Jen Silverman and her disparate characters all named Betty use the term to reinforce the liberating quality of having pride in female sexuality, an ethos that dovetails with the gender theme of the season curated by Artistic Director Nicole Stodard.

But this raucous comedy is a journey of self-discovery occurring in a satirical absurdist world that echoes Beckett, Ionesco, Genet and especially Caryl Churchill – just the kind of play Stodard has championed since 2010.

For instance, a bisexual Betty and a lesbian Betty encouraged a straight-laced repressed Betty to examine her vagina by sticking a mirror up her dress. The moment is terribly funny and the metaphor a bit blunt, but the point is inescapable.

The play’s original full title is indicative: Collective Rage: A Play in Five Boops; In Essence, a Queer and Occasionally Hazardous Exploration; Do You Remember When You Were in Middle School and You Read About Shackleton and How He Explored the Arctic? Imagine the Arctic as a Pussy and It’s Sort of Like That.

The episodic plot presents five women in Crayola bright wardrobes who either have a friendship or will soon be introduced to each other, even though they could not be more different other than being desperately lonely. But they share one thing, no matter how deeply suppressed: lifetimes of subjugation have built up inside a soul-distorting rage.

She is holding a party with another uppercrust Betty with pearls, the lovely but nervously fluttery Betty #2 (Betsy Graver) whose arid sex life with her negligent husband has eroded any sense of self-worth.

Invited for some reason is Betty #3 (Vanessa Elise), a Sephora beauty counter saleswoman whose outsized ebullience, charisma and overbearing confidence mask something else.

#3 invites #2 to a much looser party attended by #3’s lovestruck buddy Betty #4 (Gretchen Porro), a decidedly butch truck mechanic. At the party, they encourage #2 to explore her sexuality by, almost as a joke, indulging in that mirror examination. Something in that act triggers her awareness that something is terribly wrong in her life.

Then #4 meets at her garage with Betty #5 (Carey Brianna Hart), a boxing club trainer whose physical needs enjoyed free reign during a recent prison stretch, but whose emotional needs have gone unmet – something both women have difficulty articulating.

Finally, #1 tries to exorcise a rage she didn’t know she had by working out at #5’s gym. This society lady pummels her sparring partner’s gloves, saying, “I want to rip someone’s throat out. I want to tear out someone’s heart-muscle with my bare hands. I am not the type of woman who is interested in crying.”

From there, the quintet interacts when #3, recently exposed to her first theater ever, decides to write, produce, star and gather the other Bettys for a version of the play she thinks she saw, “Summer’s Midnight Dream.”

From there, the collisions grow funnier yet more poignant as these lonely women try to connect with their inner selves as well as each other. The odyssey over the entire evening is marked by a growing sense of joy.

The script is droll and moving, although the corner that some characters turn is such an acute angle that it challenges credibility. As a result, the play gets a little muddled in its final scenes.

But Silverman’s verbiage is both insightful and downright funny. When Betty #2 is being urged to examine her privates, she frets, “What if it’s ugly? What if there’s teeth? What if it’s lopsided? What if it’s lumpy? Or flat? Or geometrically displeasing? Or what if I don’t have one at all and there’s just a small animal who lives there, like a lizard or a dwarf-hamster, and all I see are the gleam of its little eyes as it stares back up at me?”

But near the end of the evening, as Betty impersonates her feckless husband, she reflects her own evolution, “I also want to talk about my wife Betty’s pussy. It’s a perfect object. Like a small clock or a marzipan fruit or something very precise and unusual and unreplicable. It could be in a museum. In a box or on a shelf or behind glass or none of those things at all, maybe on a tall post so it could be viewed without some kind of barrier separating it from the audience. My wife Betty’s pussy is an artifact of perfection.”

Silverman is also expert in having each character distinctively express herself and harbor ideas that cross the range of social backgrounds and experiences.

But it is Stodard’s comfort with this kind of material, plus the hilarious and heartfelt performances, that elevate this to a memorable evening with all the elements morphing into a unified whole.

As bizarre and surreal as their choices may be, Stodard and Thinking Cap’s six-year tenure has usually resulted in very well-crafted pieces of highly theatrical off-beat art whereas some groups attempting similar material exude a slapdash sense of intentional undisciplined anarchy.

The tone here melds comically stereotypical caricatures infused with genuine emotions that allow the audience to relate. Their yearning for love and self-worth – sometimes one leading to the other but not always – bubbles out even when they are acting or speaking absurdly.

For instance, Graver’s Betty #2 is so lonely in her sterile marriage that her only other relationship is holding conversations with her hand standing in for a sock puppet. It’s a tableau that is both silly and heartbreaking.

Silverman and Stodard have a more erudite context in mind, including using the icon Betty Boop as the thematic talisman of the play’s title and in clips from her 1930s cartoons projected on the floor. For Boomer children, Betty was just a cartoon on Saturday mornings on third-tier television stations. But to adults, especially academics and social commentators, she exemplified a barely disguised sexuality – thereby touching off a century of commentary about feminism, equality, repression and the rest.

All of the actresses have worked for Stodard before and they bravely throw themselves completely into her vision. Each gets soliloquies and speeches that expose their inner soul emerging from their exteriors.  Porro is wonderful as someone struggling to express the melancholy ache of unrequited love. Hart inhabits the tough character gingerly feeling her way toward a satisfying relationship. Elise has brilliant comic chops and no self-conscious censorship in creating this self-centered force of nature charging toward her vision of a fulfilling future, even though her Betty could not be more clueless about the process or the specifics.

But tying for first-among-equals are Graver and Olson whose characterizations are finely-grained and invisibly calibrated. They encompass their anxious cadences, their inflections and their facial expressions betraying the character’s inner turmoil and emotional unravelling.

Thinking Cap’s website features the icon of an exploding grenade, explaining “because we at Thinking Cap Theatre strive to create theatre that explodes with thought!” This one certainly qualifies.

Note: The small intimate theater was sold out opening night, so get your tickets now.

Another note: Thinking Cap is hosting monthly readings of nearly every Pulitzer-winning play written by women in a program called GAP (Gender and the Pulitzer Prize). Featuring professional actors and talk-backs afterward, the tickets are $10 general admission and $5 for students. The performances are generally at 1 p.m. Sundays at the Vanguard theater. The shows to date have included Miss Lulu Bett, Allison’s House, and The Diary Of Anne Frank. The rest of the schedule is May 28, Crimes Of The Heart by Beth Henley; June 4, ‘Night, Mother by Marsha Norman; July 30, The Heidi Chronicles by Wendy Wasserstein; August 20, How I Learned To Drive by Paula Vogel, at 5 p.m.; September 24, Wit by Margaret Edson; October 29, Topdog/Underdog by Suzan-Lori Parks; November 19, Ruined by Lynn Nottage; December 10, Water By The Spoonful by Quiara Alegría Hudes.