Lush, Lovely And Topical ‘The King And I’ Swirls Into The Arsht 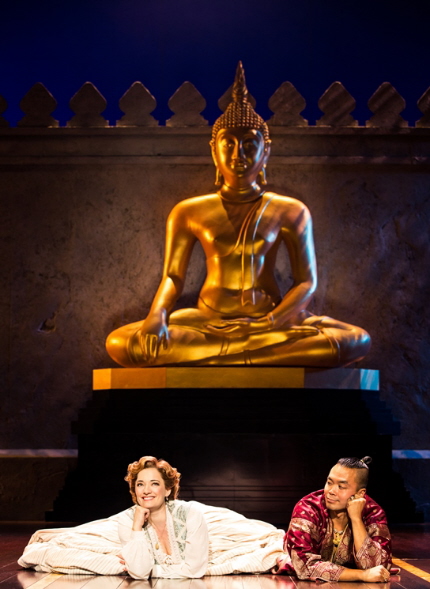 Damaged by yet another homogenized film version of Rodgers & Hammerstein’s work, few think of The King and I as a piece deeply focused on incipient feminism, international politics and the challenge of leadership. But the national tour at the Arsht Center of the Lincoln Center revival underscores how prescient this was when it was written in 1951.

That said, this lush and lovely production underscores a much broader and deeper theme: our profound yearning to strive to evolve into better human beings while struggling to find our footing in an uncertain changing world.

The most obvious overwhelming virtue is the score and lyrics. Arguably, Carousel was Rodgers & Hammerstein’s best overall work. But this production is, by far, their loveliest with soaring melodies and pungent moving lyrics–all of which stress genuine sentiment not sentimentality. It’s not just the parade of greatest hits, but the extensive underscoring and dance music that melds the entire evening into a whole. Credit is also due to the long-dead Robert Russell Bennett whose original 1951 orchestrations add immeasurably to the exotic but full sound.

Furthermore, and we’ve said this repeatedly, Hammerstein was and remains one of the finest book writers the profession has ever seen. His characters are vibrant, complex; his themes are amazingly enlightened for a 66-year-old work. Hammerstein was a sophisticated urbanite, but his life experiences never dimmed the “cockeyed optimist’s” deep-seated belief in the potential for good and the inherent decency of humanity.

The creators and director Bartlett Sher (the revival of South Pacific) have an unusually first-rate cast for a tour (although we’d love to have seen Kelli O’Hara who won a Tony as Anna in 2015).

Laura Michelle Kelly, best known for Mary Poppins, is a solid enough actress to credibly inject a pre-feminist feistiness and spunk in Anna’s scenes of defiance with the king. Her Anna knows she is a guest in a centuries-old society with different mores. But she is calmly insistent that justice be done and promises be kept.

But it’s Kelly’s voice that is the treasure. She manages to avoid the cloying sugary traps of “I Whistle A Happy Tune” and invests a genuine affection for her charges in “Getting to Know You.” But the reason she was hired becomes obvious as that silvery soprano croons “Hello, Young Lovers.”

Jose Llana inhabits the King with a comfort born from having been one of a parade of people playing the role in the 2015 Lincoln Center production. It’s a tough assignment to make the King a three-dimensional person rather than a cartoon, but Llana succeeds in convincingly encompassing this complex human being’s disparate facets, charming one moment and cruel the next. He may not have the supernatural charisma of Brynner, but he sings much better and delivers a solid performance that is less self-aware than Brynner.

But the best voices in the cast belong to Joan Almedilla as the heart-breaking loyal Lady Thiang and on opening night understudy Q Lim as the doomed Tuptim. With nearly operatic instruments, they embrace and do full justice to the most gorgeous songs in the show, “Something Wonderful” and “We Kiss in a Shadow” and “I Have Dreamed.”

Sher is a master at molding his team into a single vision and his staging in New York was expansive. But he had Lincoln Center’s massive modified thrust stage to work with there. On the road, he must adapt to simple shallower proscenium stages. As a result, his characters often just shuttle from one side of a stage to the other on a single plane; the result is a flat feeling. This is especially noticeable when Anna and the King do the iconic polka in “Shall We Dance.” But Sher knows how to elicit the best in his cast’s acting chops and in staging, such as the King’s death scene, which is deftly created by Sher and Llana.

An ovation is also due choreography by Christopher Gatelli whose dancers are instrumental (along with Catherine Zuber’s filigreed costumes) in evoking another time and place with the Oriental-style movements, all angular and simultaneously sharp and smooth with athletic leaps and fierce poses. Obviously, he gets an extended opportunity to show off his vision in the evocative but lengthy ballet, somewhat too lengthy for 21st Century attention spans, “The Small House of Uncle Thomas.”

Unfortunately, Broadway Across America does not believe Miami-Dade and the Arsht can deliver enough of an audience to financially support two weeks of performances, so this run ends Sunday.

The King and I play through May 14 from Broadway Across Americaat the Adrienne Arsht Center for the Performing Arts, 1300 Biscayne Blvd., Miami. Performances are 8 p.m. Wednesday through Saturday; 2 p.m. Saturday; 1 p.m. and 7 p.m. Sunday. Running time 3 hours including one intermission. Tickets are $29-$175. Call (305) 949-6722 for tickets, at www.arshtcenter.org

This entry was posted in Performances, Reviews and tagged Arsht Center, Bartlett Sher, Broadway Across America, Jose LLana, Laura Michelle Kelly, Rodgers and Hammerstein, The King and I. Bookmark the permalink.