New Theatre’s Chilly Winter Is Family Drama For All Seasons

Posted on February 5, 2012 by Bill Hirschman 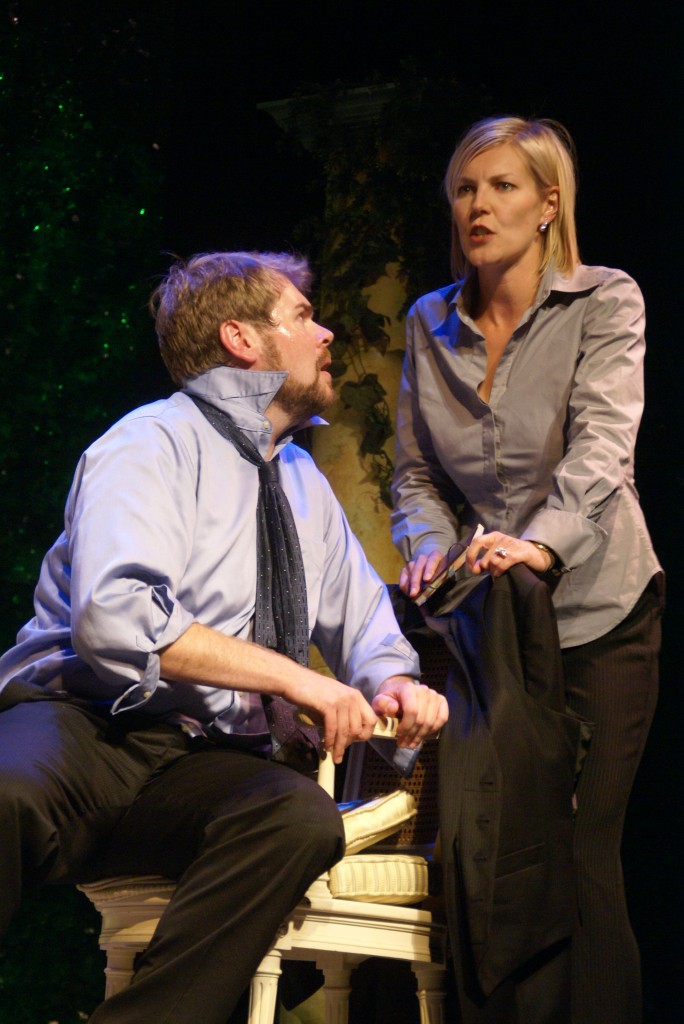 The bickering twins at the center of New Theatre’s world premiere Winter constitute one of the most articulate dysfunctional families in theatrical history.

Words of wit and words that wound pour out of the siblings like spewing torrents of toxic waste as they continue a lifetime’s jockeying for one-upsmanship.

Robert Caisley’s script could use some pruning and actors Scott Douglas Wilson and Annemaria Rajala could use a bit more stage time to get comfortable with the punishing cascade of dialogue. But neither flaw cripples the three from creating an ultimately harrowing evening of drama under the direction of Ricky J. Martinez as we watch the already fractured family melt down completely.

Wilson and Rajala portray Peter and Christina Winter who resent that their busy lives as an ineffectual teacher in Seattle and a hyper-competent executive on Manhattan have been “interrupted” by the death of their mother Elinor (Barbara Sloan), a widow who lived in England with a caregiver Sophie (Nicole Quintana).

These two are a piece of work cut from the same cloth. They are comically self-absorbed (Caisley’s script is also funny) and incapable of establishing genuine human connections with even their spouses, let alone devoting time to their mother in recent years.

The siblings spar as Christina investigates just how Elinor died and whether Sophie was complicit.  Peter just wants to get back home to finish planning his latest wedding.

Caisley unreels secret after secret, jamming almost too many of them to follow in the final 10 minutes as the principals savage each other with every emotional scalpel and club they have. But if you haven’t figured out Elinor’s “big” secret long (not the most important one) before it emerges from her diary, you’re not paying close enough attention.

The twins talk at, around, over and through each other simultaneously. They already know what each other is going to say after 35 years and therefore don’t actually feel the need to listen. The two actors under Martinez’s direction pull off this trick masterfully – although we didn’t need it to go on and on.

Caisley pens memorably cutting remarks a la Oscar Wilde. Christina says of the husband she no longer loves, “He was emotionally neutral. To put it more colorfully: he was the personification of Switzerland.”

And he has a feel for banter as well:
Christina: I find her (Sophie) furtive….
Peter: What are you basing furtive on?
Christina: My instincts. And her eyes, she avoids eye contact. Did you notice?…. She has yet to look me squarely in the eye.
Peter: No one wants to be turned to stone.

Even Elinor, who we see in flashbacks and as a spirit, can be sharply critical. “I am not unkind, I’m observant. There’s a difference,” she says, certain to elicit a chill of recognition in some audience members.

Caisley is an experienced playwright whose Kissing played at New Theatre in 2009. Like the scripts in most first full productions, his Winter needs some judicious editing before a subsequent production. It would help to air out what writing guru Roy Peter Clark called densepack writing (a frequent fault of this critic). It strains credulity that even these erudite people, as angry as they are, could formulate invective on the fly that borders on such Rococo wordsmithy.  His rhythms and verbiage are impressive, but sometimes they overwhelm the talented cast members who could use few more performances to become accustomed to Caisley’s verbal corkscrews.

This shortfall is evident because Martinez allows the two leads to barrel through the dialogue as if the meaning of their lines doesn’t deserve a bit of timing and topspin on a reading. One example, Peter says he needs to call his fiancé fretting over their wedding: “Hang on a sec while I plug the dike…. Sorry, that didn’t come out right.” That’s a funny line, but it’s lost because Wilson doesn’t take a beat between the sentences.

But all the elements brought together by Martinez and company fuse together in the final minutes as the last devastating secret is revealed, leaving behind an emotional wasteland. It helps that the penultimate speech is delivered by Sloan who does not race through her words, but metes them out in a measured cadence that allows their weight to land with the audience.

Speed aside, this is some of Martinez’s best work, especially the physical staging in which these isolated characters start standing still in pools of light on either side of the stage. But eventually they circle and stalk each other, stand on furniture, lie askew on the floor, kneel, invade each other’s space and nuzzle each other as a taunt.

Sloan, as always, has a lifeforce that shines like an aura. Quintana is adequate if lacking the charisma that would explain part of the plot. Per the script, she may speak with a Received English Pronunciation, but she is mysteriously from some exotically different ethnicity.

The play belongs to Wilson and Rajala who both invest their slightly cartoonish characters with a sense of credibility. These are cold, cold creatures who the actors somehow make us feel a smidgen of compassion for.

Wilson is a gifted character actor with a leading man’s looks. His Carbonell-nominated turn in Infinite Abyss’ The Pillowman  was stunning and his multiple roles in New Theatre’s Henry V was among the two reasons to see the show at all. Here, he disappears into this overgrown adolescent who is hitting on Sophie while whining that he needs to get back to his young fiancé. Again, he ran line after line into each other like a pileup on I-95, but that may ease up by next weekend.

Rajala, a New Theatre stalwart who has played Portia and St. Joan, has been on the West Coast for several years now as a yoga instructor. It’s terrific to have her back for a while. While the lingering trace of her Finnish accent seems a bit out of place with Sloan and Wilson, she’s an engaging actress who imbues a steely vitality to Christina and delivers a wonderful arch look that calls horse-puckey on Peter’s intellectual airs when he quotes Shakespeare.

A tip of the hat to the Quintana’s setting of an elegant drawing room sporting a glittering chandelier and backed by the sparking emerald wall of a tall garden hedge. The set was enhanced significantly by the morphing and evocative lighting changes designed by Eric J. Cantrell.

Winter marks New Theatre’s second show in its new home at Roxy Theatre Group near FIU. It’s eight miles west of its old digs in Coral Gables, but remains pretty easy to reach, features free parking and offers numerous inexpensive restaurants and fast food joints nearby. Best of all, its stage and lighting equipment are about twice what it had to work with at the Gables, and has about 50 percent more seats.