Once Again, Once Soars And Lands As Paean to Love

The cast of Once at Actors Playhouse / Photos by Alberto Romeu

At the end of the first act of the musical Once, one scene never fails to soar no matter how often you’ve seen it.

An emotionally struggling busker, taking a chance on returning to life, gingerly stands atop a bar in an Irish pub filled with rowdy musicians. He starts to play a love song he wrote, “Gold.” Its beauty slowly mesmerizes the crowd and, recognizing its resonance in their own lives, they join one by one in a swelling musical accompaniment until they are one. A young woman roams the group in open-mouthed awe – not just because each person could relate to the music individually, but because it reminds them of a kinship among fallible wounded yearning human beings. No one is alone.

If there is any reason for human beings’ existence, if there is any gift God gave us that no other creature has, it is the ability to write and sing songs. Not simply music. Birds can issue forth notes.

What the musical Once illustrates on the stage of Actors Playhouse is the unparalleled power of song to capture and then share the pure pain and pleasure of love.

Set in working class Dublin where the denizens seem to live in bars where they play instruments between pints of Guinness and Harp, the eclectic score encompasses a wide range. Rousing foot-stomping tunes with fiddles and slapped packing crates for percussion in the pre-show warm-up. Heartwrenching folky duets of cauterized kindred souls unable to allow themselves to connect.

The 2011 musical, based on a 2007 film, was a surprising Tony-winning hit on Broadway and was equally popular in a national tour. They all depict a poignant love story between a heartsick musician “Guy” about to give up his dream of being a successful singer-songwriter until a chance meeting with a Czech émigré “Girl” who encourages him over five days to restart his life. Love grows unbidden between them. But both are wounded souls with situations that keep them from committing to each other.

True to the unique Irish blend of pessimism and optimism, this cannot end like a fairy tale. But hearts will be reopened to possibilities. As one character says, “”A million times heartbroken and Dublin keeps on going. You’ve got to love Dublin for dreaming.”

They are surrounded by an ensemble of quirky Irish characters all of whom play instruments and provide the backing band as well as specific people in the couple’s lives.

Glen Hansard and Markéta Irglová, who starred and wrote the music for the film, added more songs to this score. Enda Walsh skillfully adapted the film script by John Carney. The film and the musical featured the Oscar-nominated song “Falling Slowly,” which, to be honest, never quite touched this critic – until he heard it here.

A truly superb cast of 12 – several of whom have performed in the piece elsewhere – has been guided by Artistic Director David Arsico whose heart is clearly with these offbeat characters, musical director Ryan McCurdy whose long experience with this show paid off with expertly crafted performances, and Jeni Hacker, prevented from echoing the brilliant original choreography by Steven Hoggett, developed her own effective musical staging. McCurdy’s work is especially notable in such moments as the precision molding of the late second act a cappella reprise of “Gold.”

Ben Hope, played Guy many times on Broadway, but he was a last-minute substitute when an actor bowed out and already-cast ensemble member Stephen G. Anthony told Arisco that he had a friend who could do the role. The very handsome Hope has that damaged vibe of someone who lost love and is aimlessly wandering without hope or expectation of anything ever good happening again – think of Liam Neeson in “Love Actually.” But his voice rises out of his body like the last pure thing in his life seeking something above the grey cloud cover.

Elizabeth Nestlerode not only has a lovely voice and a skill at the piano but she absolutely nails the idiosyncratic persona of Girl, someone with a scarred survivor’s pragmatism, a hilariously blunt straight-forward honesty, a sardonic wit and yet a belief in the romanticism of Guy’s music. Nestlerode conquers the role so deftly partly because this University of Miami grad just came from an edition at Florida Studio Theatre in Sarasota.

They and others who have played their roles before exude a naturalness in inhabiting the characters because they do not have to worry about the material.

But each plays various parts as well including Chris Blisset as the burly bearded bear Billy, Andreina Kasper as the bank manager drafted into the band, Barry J. Tarallo as Guy’s Da, Margaret Dudasik as Guy’s ex-girlfriend in America, Joanne Borts as Girl’s mother, plus Cody Craven, Michael Friedman and especially Anna Lise Jensen, fresh off her triumph in The Bridges of Madison County, as the sexy Reza. Abbey del Corral and Maria Diaz switch off as Girl’s daughter.

Arisco’s direction rarely calls attention to itself in musicals, but he has a solid instinct. For instance, on Broadway and on tour, the couple’s bonding walk in the hills above Dublin was staged atop the bar at the back of the set. But Arisco wisely brings them to the lip of the stage where we can see the emotions flitting across their face betraying the emotions they are subsuming.

As it was on Broadway, audience members can go up on stage for 15 minutes or so before the show and wander Jodi Dellaventura’s superbly appointed recreation of an Irish bar. Then at curtain time, some of the performers come out and hold a 20-minute jam session of Irish folk music during which the audience is gently escorted back to their seats. Much of it is a raucous celebration that enchants the audience and brings them to silence even though the house lights are still illuminated.

But the capper of the pre-show is Tarallo, once again reminding everyone of his matchless talent, as he plays the mandolin and croons the gorgeous slow ballad “On Raglan Road.” Wisely, Arisco then dispenses with pre-show announcements and slips Guy into the bar to play his first song.

Like the rest of the evening, it is simply enchanting.

(Note: The scene being referenced at the top can be seen in the YouTube clips from the 2012 Tony Awards.  https://www.youtube.com/watch?v=pXCSdpJVe7I )

Once  plays through March 25 at the Actors’ Playhouse at the Miracle Theatre, 280 Miracle Mile, Coral Gables. Performances 8 p.m. Wednesday-Saturday, 3 p.m. Sunday, and Wednesday, March 7 at 2 p.m.  Running time 2 hours 30 minutes including one long intermission. Tickets $57-$64. The theater offers a 10 percent senior discount rate the day of performance and $15 student rush tickets 15 minutes prior to curtain with identification.  Visit actorsplayhouse.org or call (305) 444-9293. 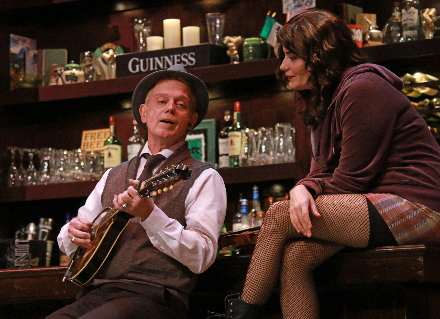