No Frills, No Problem: Masterly McPherson Monologue Gets the Ground Up & Rising Treatment 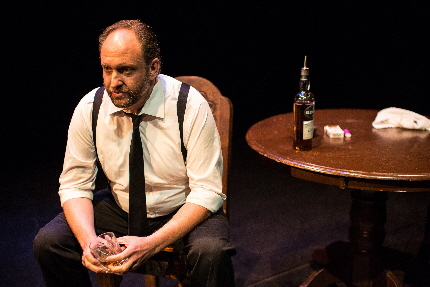 Ground Up and Rising, Miami’s most minimalist theatre and often one of its hardest-hitting, is accustomed to the most frustrating of accolades. When year-end praise is lavished on the small company, it’s a variant on “the best performance you didn’t see” or “the finest show you missed this year.” By dint of a number of factors—a performance venue in the boonies of southwest Dade, insufficient marketing, an off-season season—Ground Up’s productions have more guts on the stage than butts in the seats.

So it was at the opening night of The Good Thief, Conor McPherson’s marvelous 1994 monologue about an Irish heavy’s bloody road to something like Damascus, produced in the mostly empty Lab Theater of the South Miami-Dade Cultural Arts Center. If Gregg Weiner, onstage for a continuous 70 minutes, felt disheartened by the turnout, you couldn’t tell it from his performance. He embodies a raffish and self-possessed raconteur of pain and longing that will likely only improve as the run continues.

Weiner’s title character is an unidentified man confessing to us from an undisclosed location. Within the first 10 lines, thanks to McPherson’s crystalline, compact writing, we have a sense of his profession, his troubles, his hardscrabble personality. Until recently, he worked for a mobster named Joe Murray, dirtying his hands and his conscience on sundry assignments:

I scared people for him.
Set fire to places.
Shot people. As warnings.

He’s still nursing a painful breakup with a girlfriend, Greta, who poured salt in the wound in his heart by taking up with Joe Murray. “Power attracts women,” he explains. “Also, I had been beating her up and I knew it was wrong but I’m not the issue here, so let’s leave it.”

He then recounts his final, pivotal job for Joe Murray, a straightforward scare mission against a rival. Like every simple-plan-gone-awry movie you’ve ever seen, the carefully laid assignment unravels before it starts. Shotguns are discharged, bodies hit the floor and pandemonium reigns. Soon enough, the good thief is navigating the Irish countryside with a pair of hostages, on the run from Joe Murray, the authorities, perhaps even lingering remnants of the IRA.

McPherson’s script, an early work of fringe-festival length and style, is an unforgiving 31 pages of unbroken soliloquy. Director Collin Carmouze wisely divides the text into manageable chunks with precisely timed actions. Every now and then, Weiner will fiddle with a box of Marlboros or polish off more scotch from the bottle of Glengoyne single-malt that beckons atop a scarred wooden table. (On opening night, he created another break by generously stamping out a cockroach that was scurrying across the theater’s floor, even improvising a rejoinder: “Thanks for joining us, mate!”)

It’s one of the harsh realities of South Florida theatre, with its punishingly short rehearsal schedules and lack of previews, that we’re required to critique what is often an actor’s very first show in front of an audience. This was the case with The Good Thief, where Weiner was still growing comfortable with the deluge of words. His careful narration was deliberate and steady even during the script’s most heated confrontations. His interpretation was cautioned, even eggshelled, for a bruising gangster, and the abrupt ending didn’t quite land.

But his Irish brogue, under direction from dialect coach Rebecca Covey, always convinces, and his connection to the audience is undiminished. Weiner appears fully cognizant of the spectators, dividing his gaze between the two black-box seating sections, looking us directly into the eyes.

The performance is mentally, if not physically, demanding. There are no choreographed reenactments, no miming of shotgun blasts and fisticuffs and frantic getaways, a la actor Graham Earley’s overly animated take from 2010, viewable on YouTube. There are arguments to be made for both approaches, or perhaps a medium between the two, but Ground Up’s Good Thief deserves credit for riveting us with words and inflection alone.

Yes, there are lovely lighting changes courtesy of designer Will Cabrera, who almost invisibly captures the play’s subtle gradations of early-morning sunlight, dusky twilight and pitiless night. And the minimalist sound cues from Arturo Rossi include a patter of rainfall and receding sirens.

But this production, in Ground Up’s signature barebones style, favors the spartan over the stuffed, drawing abundance from negation. Weiner’s frill-less performance and Carmouze’s restrained direction only underline the acuity of McPherson’s vivid descriptions, which require no physical reinforcements.

They just require an audience, which is where you come in. Please.

This entry was posted in Performances, Reviews and tagged Collin Carmouze, Conor McPherson, Gregg Weiner, Ground Up and Rising. Bookmark the permalink.