Nothing Average About Measure For Measure’s Next To Normal 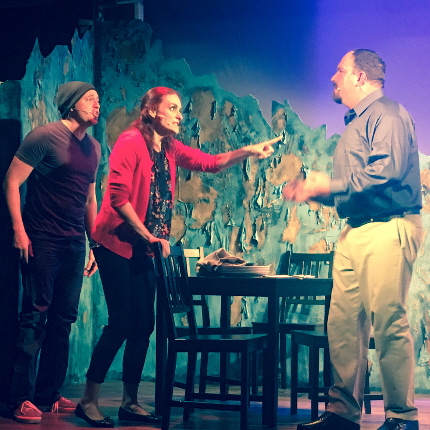 Christopher Alvarez, Sabrina Lynn Gore and Johnbarry Green as the embattled family in Measure for Measure/Infinite Abyss’ Next to Normal / Photo by Fernando Barron II

A new theater company debuting its first production by choosing a complex musical about mental illness, and in the small confines of the 50 or so seat Abyss Theatre on North Dixie Highway in Wilton Manors? Now that takes confidence.

And confident the professional, non-Equity Measure for Measure appears to be, as it dives head first into the complicated, yet wholly satisfying, Pulitzer and Tony-award winning Next to Normal, as part of a co-production with Infinite Abyss Productions.

Next to Normal, self-described as a rock musical, although it’s more like a modern rock opera, deals with the effects of mental illness on a suburban family. The show itself is difficult in so many ways: How it takes on the subject matter without making it come off as a Lifetime movie of the week, and how it makes so many demands on its actors. For the show to be good, they must be willing to dive in and give characters a no-holds barred range of raw emotions: rage, hurt, desire, hunger, humor, humility, and the list goes on.

In fact, it even demands of its audience to go through the topsy turvy and difficult world of the Goodmans. There’s Diana Goodman, who could be your next door neighbor, but who has embarrassed her family by, among many things, running naked through the streets of town, and whose life is in such a downward spiral that she’s ruining everyone else’s life around her. Not that she can help it. She’s suffering from depression, perhaps bi-polar disorder brought on by a traumatic event. Her condition, the play states is simply put: pathological grief.

In the no-holding-back department, Sabrina Lynn Gore adds so many dimensions to her Diana. She could completely crack at any moment, but she’s hellbent on keeping it together. The swirling and whirling that goes on in Diana’s mind is on view for everyone to see, and for you to get caught up in. Gore’s portrayal makes her more heroine than victim, and the way she wears her heart on her sleeve, you cheer her on even when she’s missed her daughter’s piano recital, or, in her depressive self-involvement continues to make her husband’s life a living hell. She puts you through her wringer, and damn if you aren’t exhausted by her emotional rollercoaster.

Johnbarry (JB) Green plays husband, Dan, who wants more than anything to go back to the days when he and Diana were happy. Yet, there’s more to Green’s Dan than wishing his family were normal, or well, at least closer to normal – he lets you inside Dan’s soul, which is tattered from too much time caregiving, and mopping up messes, both literally and figuratively. He tugs at the heartstrings in his hopeless, yet hopeful anthem “It’s Gonna Be Good.”

Their teenage daughter, Natalie, is played with pure honesty by Camryn (Cami) Handler. She never lets Natalie become a cliché of teenage angst, where this role could easily drift, but instead finds a way to present the pain of not only dealing with the difficulties high school brings, but the burden of dysfunction in her home life that follows her like a black cloud. Charlie Alguera plays boyfriend Henry with a quiet desperation – he so wants Natalie to need him.

As brother Gabe, Christopher Alvarez has to be everything to his mother Diana, while walking the thin line of coming between her and husband, Dan. There’s a spoiler in here about where Gabe fits in, and we won’t give it away. Alvarez finds a way to be human in a role that requires a delicate balance. When he woos the audience in his solo “I’m Alive,” it’s done with such conviction that there’s no reason to believe otherwise.

Doing double duty as both therapist and psychiatrist to Diana is Ernest K. Gonzalez. He’s affable and effective, and is given the difficult task of trying to make psycho-pharmacology relatable. Let’s say Gonzalez has to do triple duty: When Diana envisions him as a rock star, Gonzalez is quick to turn from straight-laced doc to a crazed Steven Tyler.

Director Daimien J. Matherson  has plenty of movement on this small stage, but it never seems cluttered or messy. With so much happening in this show, it’s dizzying, but Matherson makes it all work like a jigsaw puzzle so that it adds to the necessary frenzy.

The set, also by Matherson has two, large abstract painted corners, one on stage left, and one on stage right, that are used for different settings – a piano rehearsal room at school for Natalie, a bathroom with a medicine chest where Diana’s cadre of pills is stashed, the entrance to a hospital room, or psychiatrist’s office. It offers different playing levels for dramatic action, however, when the action is low towards the floor, it’s difficult to see what’s happening.

The main playing area reflects a typical American home, a kitchen stage left, a living room with a comfy chair stage right with photos of a baby and a cat and other homey pictures on the walls. On the rear wall is a design that suggests mountains (apropos when Diana sings the show’s signature “I Miss The Mountains.”)

If there is one criticism of this production it would be how to effectively manage the sound from the five-piece band placed on a second-level in the rear of the theater. Because of the size of the room, sometimes the music is too overpowering, drowning out the singers. It’s a balance issue in some respects, too, since the performers are in front and the band is in the back. The band is David Nagy, keyboard, Johanna O’ Wright-Vines, cello, Chris Vallone and Greg Minnick (alternate), bass guitar, Jason Smith and Melissa Vaz-Ayes (alternate), and drums, Christopher Gacinski.

With mental illness looming large, especially in light of the tragic shooting that happened in our own backyard mere months ago, Matherson makes a statement in this production that brings this issue close to home. A special touch, subtlety added to the ending, is both heart-warming and heart-wrenching. It’s triumph in the midst of tragedy, and the message is loud and clear.

Next to Normal runs through June 3 at The Abyss Theatre, 2304 N. Dixie Highway in Wilton Manors. Showtimes are 8 p.m. Thursday-Saturday and 2 p.m. Sunday. Running time: 2 hours and 20 minutes with an intermission. Tickets are $39.50. Info at www.measureformeasuretheatre.com or www.infinite-abyss.org or call 954-489-8440

To read a feature story on the company and its founder, click here.