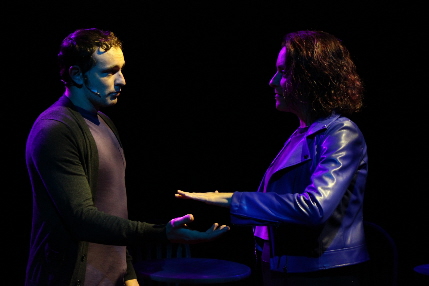 Lust, anger and anguish pour out of urban millennials like molten liquid gushing from an open fire hydrant in the new production of the chamber rock opera Murder Ballad at the Broward Center

Measure for Measure Theatre – a Broward-based company of modest means that  surprised theatergoers last season with an affecting production of Next to Normal – has once again plugged into the marrow and guts of a contemporary piece to produce a powerful evening.

This sung-through love triangle (actually quadrangel) with direction by Daimien J. Matherson and musical direction by Justin Landers hews to a classic arc as pre-ordained as a Greek tragedy or a film noir, which are good analogies if those works were re-set in 21st Century New York City

But here, the hunger for something even the characters can’t quite identify erupts in jagged, jangling inner monologues and impassioned face-to-face duets delivered by a cast with supple but gale force voices comprised of pure pain.

Murder Ballad, a cult hit from its first stagings in 2012 and presented at Actors’ Playhouse inn 2014, has a book and lyrics by Julia Jordan, and music and lyrics by Juliana Nash. The title refers to a type of folk song that dates back to 19th Century Appalachia although its roots can be found in Europe hundreds of years earlier. The fatal geometry remains timeless. They sing, “I’ll tell you a tale / where good does not prevail.”

Sara (the superb Sabrina Lynn Gore) is a disaffected uptown urbanite using liquor at downtown clubs to anesthetize the black hole in her life. She is having a liquid-driven affair with bar owner Tom (Eric O’Keefe) whose primary component is sex – which does little to assuage what’s bothering her. The story’s narrator, a sexy sardonic bartender (Nikki Dikun), is equally smitten with Tom who pays no attention to her.

The couple’s bond seems unshakeable as they sing out in an East Village bar but both are wounded creatures. “I know where promises go,” Sara sings at one point. “Don’t make me a promise / people take them away / I don’t want you to love me / I just want you to stay.” Two years later, Sara breaks it off in a complex swirl of emotions and rationales.

After one particularly empty night, she hooks up with Michael (Christopher J. Alvarez), a compassionate NYU poetry student. She warms to his kindness and decency when she tries to have a one-night stand. They marry, have a daughter and forge an uptown kind of life.

But after five years, troubled by her inability to resume a life in music, she longs for something dangerous, even self-destructive. The seemingly perfect life cannot fill the congenital hole in Sara’s psyche. As one lyric has it, “Losing’s easy. Winning’s hard.”

It drives her to secretly slip from her family to renew an even more doomed relationship with Tom. The question is never whether someone is going to end up dead; it’s who is going to kill who.

Matherson along with assistant director Murphy Hayes and choreographer Kelly Johnson have infused a visceral physicality that delivers the sense of people consumed by – actually a prisoner of – lust when their actual obsession is for something that sex cannot slake. Hands are forever stroking thighs and buttocks. Bodies intertwine on top of the bar and the pool table. Characters are sometimes on their hands and knees like animals about to lunge. People even at rest seem a moment away from propelling themselves toward something. Johnson in particular designed a dance sequence in which Sara careens between the two lovers.

The lyrics cascade by so quickly that it’s difficult to soak them in as you would in a traditional Broadway musical; you catch the precise wording of a couplet here and there. As a result, the show seems a tad long even at 75 minutes because the detailed sentiments are lost. But the cast is so communicative through their singing, their facial expression in the intimate venue and especially their body language that the prevailing emotions and meaning are unmistakable.

All four actors dive unreservedly into the chemical maelstrom of these characters. But Gore once again reaffirms her unequaled prowess at this kind of material. A couple of days earlier, she had been playing the comically alcoholic secretary in Slow Burn Theatre’s light-hearted 9 to 5 in the adjacent auditorium. But she had cemented her bona fides last season with her Carbonell-nominated manic-depressive mother in Matherson’s Next To Normal, and she delivered similar vocal work in Lizzie the Musical at Thinking Cap.  Her Sara seems driven by a fiery tornado inside, almost helpless to the tidal forces impelling her to knowing self-destructive betrayal.

Indeed, as actors, the entire cast seem slaves to the tragedy that they can all see is inevitable.

The set in the Abdo River Room is simple. With the audience at tables like a nightclub as usual in this space, the band is lined across the back wall, a table and chairs on the audience floor is reserved for the characters, a bar is the sole piece of furniture on the stage, a pool table on the auditorium floor will double as the lovers’ bed, and a large empty space on the floor directly in the audience’s face will see plenty of action. The narrator goes around the room before the show starts asking which patrons won’t mind a little audience interaction during the story.

The atmospheric lighting by Clifford Spurlock is flexible but you sense he could have used a couple more elements. Rich Szczublewski once again tames one of the legendarily worst venues for sound so that you can hear every note and every word clearly.

The muscular music is its own animal with a band including Landers, Chris Vallone, Jason Smith, Chris Gacinski and at some performances Ryan Crout. But it does echo Rent, Spring Awakening and Next To Normal. The lyrics are not as self-consciously witty as Sondheim, but they have a razor incisiveness about human frailty with such phrases as people being as “heartless as a hand grenade.”

Traditional operas contend that they tell of such passions; Murder Ballad embodies them.

Murder Ballad presented by Measure for Measure Theatre through April 28 at the Abdo New River Room, Broward Center For The Performing Arts, 201 SW 5th Ave., Fort Lauderdale. Performances are Thursday through Saturday at 8:30 p.m., Saturday and Sunday at 2 p.m. Running time 75 minutes with no intermission. Tickets are $50-$60. Call (954) 462-0222 for tickets or through www.browardcenter.org. Info at www.measureformesauretheatre.com