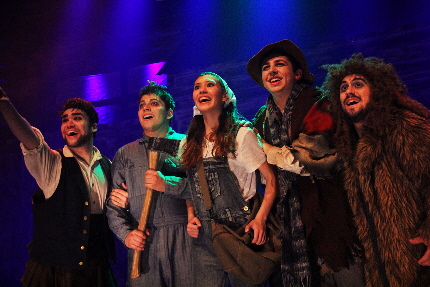 Corey Vega, Joseph Morell, Andrea Duque, Jorge Amador and Jonathan Debs are off to see… well, you know in Area Stage Company’s The Wizard of Oz

The phrase “fun for the whole family” usually is a disingenuous marketing ploy meant to drag luckless adults into the theater instead of just dropping their children at the front door.

But theater professionals across the country have been laboring to develop projects that will entertain the kiddies but offer humor and insights to tickle and satisfy the parents – or any other adult who buys a ticket.

Area Stage Company in Miami excels at clearly challenging adult plays such as The Nether and The Octoroon helmed by co-founder John Rodaz.

But in recent years, his son Giancarlo has been producing titles that might seem on the surface to be children’s theater, such as Shrek.

But that’s the surface. In fact, the younger Rodaz invigorated such titles with vibrant imagination that, indeed, mesmerizes children but will delight anyone else lucky enough to attend.

Hearing that Area Stage is mounting The Wizard of Oz –intentionally rooted in the 1939 film – might make childless theatergoers pass. It would be their loss.

Rodaz, his inexhaustible cast and creative crew have constructed a charming, witty and entertaining riff whose sterling quality is how they resourcefully solve staging problems that otherwise would require a far bigger budget.

They proudly highlight the gimcrackery of those solutions. A joy for adults are the wry surprising ways iconic moments from the film are handled on stage. In another production further up the state, the head of The Great and Powerful Oz was a set piece costing what Area Stage probably spent on its whole costume budget. Rodaz gleefully settled for projecting on a wall a cartoon green skull with a flapping mouth that looked as if it belonged on South Park.

To give away just one more, when the Cowardly Lion tells his backstory, suddenly the stage is covered with fifth-rate Taymorish animals, and a baby lion is held aloft a la The Lion King. Very funny.

The most hilarious section, though – the idea, staging and performance – is the entire extensive procession of Munchkinland songs whose underlying conceit we simply refuse to reveal here. But trust us, it is a sustained hoot.

To be fair, the Kansas scenes don’t have a lot of energy or credibility; the show takes a while to get rolling even though Rodaz pours the scenes into each other fluidly. Often, throughout the show, characters are simply lined up in a single plane and talk to each other.

But Rodaz is a kind of Orson Welles – a young director, projection designer, set and scenic designer often working with a band of talented associates such as musical director Katie Duerr and costume designer Maria Banda-Rodaz who has known him every second of his life.

This script is an “adaptation” created in 1987 for the Royal Shakespeare Company by John Kane, who fails to credit the massive amount taken word for word from the film script by Noel Langley, Florence Ryerson and Edgar Allan Woolf. Kane added in scores of his own jokes, many of them truly funny puns aimed at the adults.

The score is drawn from the 1939 film with the unforgettable melodies by Harold Arlen and some of the best lyrics ever written for the screen by E.Y. “Yip” Harburg, with additional music by Herbert Stothart. Some of the original omitted intros to the songs have been restored, and the “Jitterbug” number, actually shot and then cut from the film, is restored as well.

Vocally, all but Joseph Morell as the Tinman lack memorable voices. Morell’s trained flawless sound contrasts with folks missing notes, going flat. But who cares? Their enthusiastic delivery makes up for it.

It’s problematic talking about the acting because it’s intentionally broad and many members of the young troupe are still accumulating and honing their skill set. But there are two exceptions: Corey Vega, who has appeared in the ensemble of several Slow Burn Theatre shows in Broward County, is hilarious as the wordless Toto, a silent movie sidekick with a rubbery expressive face awash in grimaces, looking askance or terrified or judgmental. Shout out to whoever had this idea: It took me about 15 minutes to realize why he was dressed in a kilt, and then I had to stifle a loud guffaw.

The other actor —and artistic directors around the region should get off the posteriors and catch this guy – is Giorgio Volpe who played the sinuous Emcee in Area Stage’s Cabaret. Like everyone in the cast, Volpe melts selflessly into the ensemble. But as the Wizard, the carnival professor, the Munchkin coroner, the menacing Jitter Bug and especially Nikko the screeching and scrambling flying monkey, Volpe is impossible to ignore. As he did with the Emcee, Volpe avoids mimicking any earlier performances even though he is saying lines many audience members know by heart.

Credit Andrea Duque, a 14-year-old middle school student, for giving the show an appealing and increasingly energetic center as Dorothy.

The rest of the cast gives everything they have: Jonathan Debs as the Lion, Jorge Amador as Scarecrow, Duerr doubling as Miss Gulch and the Wicked Witch of the West, Clasena Beason as Glinda, plus Malik Archibald, Kelley Ann Arnold, Abigail Baldwin, Valeria Di Babbo, Sierra Karr and Michael Vadnal.

The costuming is ingenious for its simplicity yet originality. Duerr, for example, puts on a dark flowing coat, a black head scarf and what looks like a long New Year’s Eve paper horn on her nose to become the witch. And it works.

The show runs a little long and lacks a bit of polish. But the imagination and the energy on display makes it worth taking a stroll down the Yellow Brick Road.