On 7th Visit, Wicked Retains Some Of The Magic, But Actors Really Pump Up The Heart 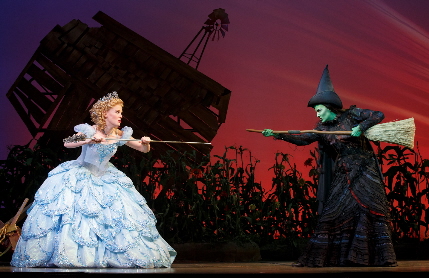 Carrie St. Louis and Alyssa Fox square off in the national tour of Wicked at the Arsht Center / Photo by Joan Marcus

After 11 years and counting on Broadway, a decade on the road and on its seventh visit to South Florida, some of the magic should have vanished from the musical Wicked.

It has become such a part of the young theater lovers DNA (like Rent for the previous generation and A Chorus Line for the one before that) that it has almost become a punch line.

But the Munchkinland tour (as opposed to the Emerald City tour) has not only maintained much of the magic, but arguably is even more heartfelt and polished than its predecessors.

Like most long tours we’ve seen coming through South Florida this season, every moment and every aspect from dances to light cues seems meticulously choreographed until it runs like that proverbial Swiss watch, which admittedly is a shade off-putting. But miraculously, also like most shows this season, the cast and crew never coast. Everything is executed with precision, skill and abundant energy.

This production does not find new shades of green or any other color in the work, so it does not require you to see it again as you might want to in the reimagined tours of Les Misérables, Evita and The Phantom of the Opera. But if you desire another journey, you will be pleasantly surprised.

Briefly, for the Broadway-challenged, Wicked has a score by Stephen Schwartz (Godspell, Pippin) and an underrated book by Winnie Holzman (Wicked) directed and crafted by Joe Mantello (a resume larger than a phone book) with musical staging by Wayne Cilento (who sat behind me). The show was elevated further by Susan Hilferty’s costumes, Eugene Lee’s sets and Kenneth Posner’s lighting.

Simply, it tells the story of The Wizard of Oz from the viewpoint of the Wicked Witch of the West in which Dorothy and Company are peripheral characters. The musical delves into the interior life of misunderstood social outsiders, the need to be faithful to who you are and what you believe, the shameless manipulation by the powerful to demonize “different” people to consolidate their power, and, of course, the joy of sisterhood that has spoken to hundreds of thousands of teenage and pre-teen devotees.

Holzman’s script is actually funnier and more imaginative than I remember with a subversive, even sophisticated wit. Repeated viewings reveal more and more sly little riffs on L. Frank Baum’s tales and the 1939 film. Her script and the show as a whole are not remotely as dark as Gregory Maguire’s original that which many of you know ends much differently than the musical.

In this cast’s hands, Schwartz’s music still glows from the group production numbers to the power ballads like “Defying Gravity” to the touching duet “For Good.”

Fox and St. Louis, who have been playing these roles together for four months, make this production soar. Fox has the range if not the power of Adele Dazeem and St. Louis has a stratospheric soprano like that other lady with the difficult to spell last name. But it is their complete immersion into the emotions of the roles that invigorate this production. The scene where the shamed Galinda reaches out to the wounded Elphaba for the first time is actually moving, and it wasn’t the last time in the evening that tear ducts moistened.

Those who have been following theater closely should not be surprised at the accomplished vaudevillian performance of ‘60s pop staple of television and film John Davidson as the Wizard. Remarkable for his still boyish apple-cheeked visage, lush hair and twinkling eyes at age 73, Davison has been working stages for decades, mostly in musicals. But those with decent memories will recall his outstanding performance as Teddy Roosevelt in a tour of the one-man play Bully that visited the Kravis Center in about 1998.

There remain a few quibbles: The opening number, which sets out the backstory, moves by so quickly that it is nearly incomprehensible unless you know the details before you come. It also doesn’t help that the lyrics of that number – and much of the show on and off – were unintelligible even if you knew what was being sung. Wicked’s management kept the press out for a day (while still charging the audience full price) so that they could fine-tune the sound system, but they still needed to do some work by the second performance.

Side note: Wicked is playing at the Arsht for three weeks. This says something about how the Broadway Across America company views this market. For years, and even now, tours are booked into the Arsht for one week only (as opposed to two weekends at the Broward Center) because the company thinks that’s all they can financially count on. This is based in part on the number of season subscriptions sold: Broward has had 20 years-plus of building up a subscription base while the Arsht has had half that time and must have seemed a “developing” market. Case in point: When the Hispanic-flavored In The Heights first played in Florida in 2010, it opened at the Broward Center rather than Arsht in the state’s epicenter of Latin culture. But that is changing; the Arsht has grown its season subscriptions from 2,000 to 6,000. This longer run would appear to be a vote of confidence in Miami’s growing validity as viable market for national tours.

$25 Ticket Lottery: A day-of-performance lottery for a limited number of orchestra seats will be held 2 ½ hours prior to each performance. People who appear at the Arsht Center box office will have their names placed in a lottery drum. A half-hour later, names will be drawn. Cash only, a limit of two tickets per person. Lottery participants must have a valid photo ID when submitting their entry form and, if chosen, when purchasing tickets.

Wicked runs through March 29 at the Ziff Ballet Opera House at the Adrienne Arsht Center for the Performing Arts, 1300 Biscayne Blvd., Miami as part of the Broadway Across America-Miami series. Performances are 8 p.m. Tuesday-Saturday; 2 p.m. Thursday and Saturday; 1 p.m. and 7 p.m. Sunday. Runs 2 ¾ hours including one intermission. Tickets are $49 – $195.  For more information, call (305) 949-6722or visit arshtcenter.org.