Posted on November 3, 2013 by Bill Hirschman 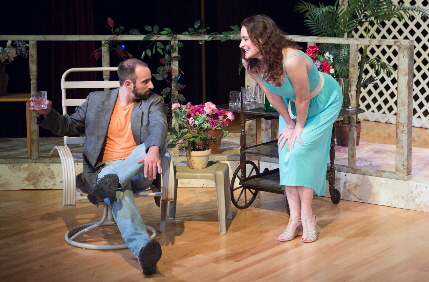 Taking its cue from the “ado” in Much Ado About Nothing, Outré Theatre Company’s broad farcical take on “Will” Shakespeare’s comedy encompasses Benedick endlessly mugging like Groucho Marx on speed and acrobats flying heels-over-head across the stage.

Dogberry sounds like a refugee from the Reno 911 TV show, actors adlib lines like “She’s like a well-dressed ninja” during a slapstick chase through the audience, and characters end their iambic pentameter speeches with a flat streetwise “yeah.”

It’s a courageous populist approach by Skye Whitcomb whose directorial inventiveness almost covers up that some actors nearly handle Shakespeare’s verbiage and some simply fail to convey the music of the language or even the sense of the words.

In keeping with Outré’s admirable commitment to go-big-or-go-home choices that has produced triumphs like An Iliad, this Much Ado About Nothing is a valiant effort that only works some of the time. There are low comedy laughs, but the intricate word play and fleeting moments of verbal loveliness usually gets lost in the mouths of actors uncomfortable with Shakespearean speech.

Most of them know their lines most of the time. But in proving that they have memorized the words, several performers rattle off the verbiage at a breakneck pace that makes it difficult for the actor to deliver with any nuance and makes it impossible for the audience to absorb.

Yet, what starts out as ragged and disappointing in the opening scenes slowly finds its bearings, growing in strength and assuredness. Even the weakest actors improve markedly. It becomes a passable if not accomplished, polished production.

To underscore the universality and the accessibility, Whitcomb has moved the action from 16th Century Sicily to 21st Century Venice – meaning Venice, California. Joss Whedon did the same thing this year with his film version set in Santa Monica. With barefoot ladies, off-duty soldiers in T-shirts, the use of Iphones and an Ipad, and cops patrolling on Razor kick scooters, it’s as cute and valid as any choice, especially for one of Shakespeare’s more rollicking romantic comedies.

For those who get the plots mixed up (“Okay, which one is this?”) Much Ado focuses on two love stories: the young hero Claudio has fallen in love with and seeks to wed the lovely heroine Hero. But the misanthropic aristocrat Don John schemes to break up their imminent nuptials. Meanwhile, Hero’s cousin, the intelligent and independent Beatrice, spars with the intelligent and independent soldier Benedick. One of Shakespeare’s inspired and oft-imitated couples, their constant verbal sword play indicates that they despise each other’s company – so you know all along they will end up together at the curtain as a perfect match of temperaments.  All’s well that ends well (No, that’s another one).

Sabrina Lynn Gore gives the most effective performance in the company as Beatrice, capturing her character’s bemused wit and the sense that she’s a tad lonely being the smartest person in the room. Gore also is the most skilled in delivering the melody and sheer fun within Shakespeare’s lines.

Tom Anello does not fare quite so well as Benedick during the first act when he is impersonating Groucho’s Capt. Spaulding with eye-popping grimaces and cartoonish triple takes that Whitcomb either told him to do or allowed him to. The words pour out of him like a broken water main, proving that he knows the words but doesn’t even slow down to 70 mph to allow the audience to appreciate what he’s saying. And here’s the kicker: Once Benedick falls in love with Beatrice, once the play dwells in a darker country in the second act, Anello’s performance is as laudable and credible exposing Benedict’s sober side as it had been problematic in the first act. It’s like Jekyll and Hyde.

Jim Gibbons, one of our favorite actors, has successfully wrestled the Bard in similarly uneven productions at the defunct Sol Theatre in Fort Lauderdale, coming out ahead in every match. With a soft drawl, Gibbons brings a gentlemanly mien and genial authority to Don Pedro, the chief aristocrat with the treacherous brother. Like Gore, he understands the rhythms of Shakespeare’s speech without making it sound like a boring hour in English lit class.

Usually the role of Claudio comes off as just another straightforward male ingénue character that Shakespeare was not so skilled in defining as his more complex creatures. But Jordon Armstrong scores much better than that, starting with a passable facility with the language. More importantly, he delivers a credible portrait of a young man in love, although no actor we’ve ever seen has ever made plausible Claudio’s easy willingness to believe he has been betrayed by his adored Hero.

Tim Gore gets the plum comic role of Dogberry, the addled lawman who invented malapropisms 275 years before Richard Brinsley Sheridan in The Rivals. Shakespeare meant him to be a lovably dense clown (see Michael Keaton’s brilliant turn in Kenneth Branagh’s film) and Gore takes that as a license to go way, way, way over the top and chew every shred of scenery. He is funny although perhaps a little editing of the Bard might have been in order. What a molasses-mouth sheriff from the deep South is doing Venice, California, is probably missing the point of Whitcomb’s embrace of an anarchic approach.

The rest of the cast is Shannon Ouellette as a winsome Hero, Michael Mena as the moustache-twirling Don John, Murphy Hayes as Hero’s father Leonato, Laura Ruchala as the pragmatic schemer Borachio, Francisca Munoz as Hero’s maid Margaret, and a 20-something Justin Schneyer as Dogberry’s ancient second-in-command Verges. Christina Groom was the assistant director, a commendable custom at Outré. The acrobatic tumblers at the banquet and the wedding were Lito Becerra and Nicolas Moreno. Some may say that their inclusion seemed to be from another play, but it’s thematically justifiable because Shakespeare often inserted dancing sprites and rude mechanicals in his scripts.

The setting of a Venetian yard with vine-covered trellises was designed by Nori Tecosky and lit by Stefanie Howard with a few sound effects like sound of water passing by invisible canals by Danny Butler.

Outré once again deserves applause for its ambition and daring, such as its terrific concert version of Bloody, Bloody Andrew Jackson a few weeks ago. But some attempts are more successful than others.

Much Ado About Nothing runs through Nov.  17 from Outré Theatre Company, performing at The Studio at Mizner Park, second floor, 201 Plaza Real (the former Cartoon Museum), Boca Raton. Performances are 8 p.m. Friday-Saturday, 2 p.m. and 7 p.m. Sunday. Runs about two hours with an intermission. Tickets are $30, seniors $25, students $20. Call (954) 300-2149 or visit outretheatrecompany.com.