Posted on November 2, 2013 by Bill Hirschman 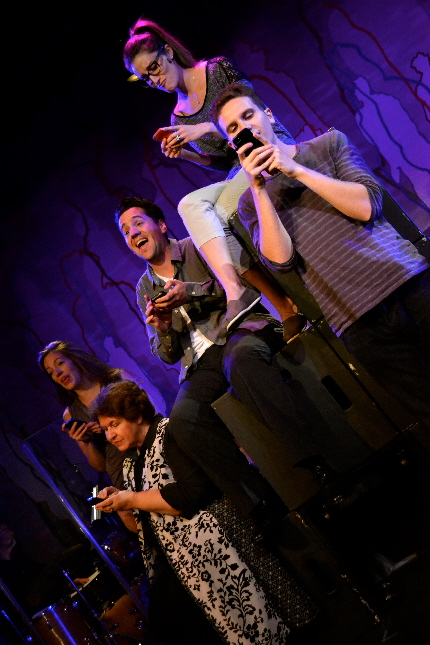 The cast of Daniel Mate’s The Longing and the Short Of It sings about relationships maintained on Facebook. From bottom left: Liz Lark Brown, Elizabeth Dimon, Henry Gainza, Alix Paige and Zachary Scott. / Photo by Amy Pasquantonio

Like a reporter, Daniel Maté holds up a mirror so we can examine ourselves more clearly in his new musical The Longing and The Short Of It at the Theatre at Arts Garage. But his vision has such incisive clarity that he is more a chronicler whose work decades hence will enable our descendants to see, as Wilder suggested in Our Town, this is how we lived in the early part of the 21st Century.

This examination of nascent, burgeoning and disintegrating relationships is not actually a musical but what theater artists call a song cycle, a slightly pretentious term for a revue. It’s a collection of songs with no book, no plot and perhaps the faintest wisp of developmental arc, unified by the author’s vision and a loose theme. Yet, that doesn’t undercut the effectiveness of the individual pieces nor their accumulated weight at the end of the evening.

It’s akin to strolling by portraits in a gallery opening. But such works feel unfinished by their nature. Maté’s considerable gifts for composing music and lyrics cry out to be married to a full evening’s story.

This marks Longing’s world premiere although it has evolved in workshops and readings. One stop last summer at Arts Garage’s Tune-Up series convinced Artistic Director Louis Tyrrell to champion a fully-staged production. In fact, Maté has received an enviable number of prestigious honors for several works in progress, but they appear to have been seen primarily in readings. Hopefully, that will change because it’s clear that Maté has what Tyrrell rightly called “something special.”

Longing offers 23 songs, some wryly humorous and many deeply affecting. His lyrics are nimble with internal rhymes as well as prosaic clichés that smoothly slip into poetry.

All are populated by urbanites struggling with anxiety, loneliness and the yearning for human connection that may be the hallmark of this era. With warmth and compassion, Maté depicts protagonists revealing their inner life through musical soliloquies. But he also has a journalist’s detached observation of emotional complexities that even the characters may be unaware of. When one woman bumps into an old flame and sings “I don’t think of you; it’s all good,” clearly neither is true.

As universal and timeless as the yearning is, Longing is very much “of the moment” with considerable references to social media and other recognizable facets. The cultural references are not window dressing; they are formative elements of Maté’s landscape. He sets one scene on a line of customers at a Starbucks, but it underscores the situation: a Boomer is wondering how he sold out his ideals and dreams over the decades only to find himself standing here at this epitome of corporate America. Another song sets up a metaphor of yearning in which the singers wish they could write a song that would be slipped into the Ipod playlist of someone they love from afar.

Similarly, Maté explores or documents how technology has affected relationships, simultaneously making us as cyber-connected with far more people as any time in history, and yet feeling even more disconnected and alone.  One song, “On My Wall” illustrates how Facebook has altered our definition of “friendship.” A woman backed up by a cacophony of “friends” sings,

They’re not the friends you have to see or call.
And I love them all…..
When somebody writes upon my Facebook wall
I get a funny feeling that I’ve never felt before:
A hundred thousand angels holding hands,
But only… More.

Using words to describe Maté’s music is, like most musical criticism, trying to describe color to a blind man. All you can do is list metaphorical adjectives like “gentle” or “agile” or “compassionate.” Or you can liken it to other composers’ work you may have heard such as Maté’s mentor William Finn or that of Adam Guettel. Like those standard-bearers of the modern musical, Maté’s style is a mixture of melody that bends into dissonance or atonality. Time signatures and keys bounce around like a teenager with ADD. But he has his own unique sound, which is flexible enough to encompass numbers in the veins of soft jazz, torchy ballads and a half-dozen other genres.

Visiting director Max Friedman moves his players around unobtrusively through solos, duets and group numbers while musical director Paul Reekie guides the cast through challenging twists in the melody lines as well as the choral arrangements by Maté. Both men encourage their performers to find the emotional core of the songs and deliver the sentiments fully and cleanly without begging for sympathy

In some cases, the songs are suffused with passion like Brown angrily cutting the cord when a lover wants to break up in that insincerely civilized manner.

It’s all been talked to death
And love hates dying slow.
So you can say goodbye
But please don’t tell me why.
‘cause I don’t want to know.

Others, frankly the best ones, are contemplative numbers that come at their subject sideways. Among them is the outstanding moment that Dimon and Herrera deliver in “If You Would Be So Kind.” In it, two 50-somethings gingerly reach toward each other and the possibility of a relationship despite the fear of taking a chance on romance that late in life.

If you would be so kind,
Give me leeway
To say the most awkward things….
Now you can be a doubting Thomas,
But don’t ever doubt I’ll make every mistake.
I will mess this up, I promise!

Maté also has a feel for the witty such as another great number that benefits from Dimon’s sassy delivery: “(I Just Like) Starting Shit With You.” In it, a woman gleefully lists the annoying things she does just to get a rise out of people. But she is aiming them now at one man whom she hopes to annoy into noticing her.

Every performer gets a fine moment in the light such as Paige trying to maintain a cool response to a romance eroding half a world away in “February’s Coming.”

Gainza is a lonely drunken goofball hitting on women at a New Year in “Kissing Women Left and Right.” He also gets Maté’s most intriguing offbeat idea, “Marry Me America:” A young man sings a love song to his troubled homeland as if it was an emotionally-wounded fading beauty.

Zachary is the manchild whose deepest yearnings are for sex, beating a boxing champ and serving on the bridge of the Starship Enterprise. Elsewhere, he’s the younger brother who has watched enviously as his talented brother soars and then flames out. He’s also the young man who, like us, has a secret fantasy image of himself which he must learn to discard in favor of real life.

But Maté’s strength musically and lyrically is charming, quirky truth-telling. In the second-act opener, his cast sings wistfully of having modest dreams forced upon us in these scaled-back times in “Something Like Okay.”

And I don’t need perfection.
I don’t think perfect’s the part I was born to play.
But in my own reflection
I would love to see a softer smile
A wink that says “it’s worth the while.”
Let me taste it once. I promise I’ll
Do anything to stay
Something like okay.

The production values are minimal, but that focuses on Maté’s music and the singers’ performances. Reekie leads a live band that seems smoothly comfortable with Maté’s diverse score: Bob Bunin on guitar, Steve Salo on drums and Dave Wilkinson on bass.

It’s a thoughtful offering for adventurous audiences as the third season opener for Tyrrell’s venture whose artistic vision echoes that of his defunct Florida Stage. If there’s any justice, these songs and Maté’s voice will be heard across the country.

The Longing and the Short Of It runs through Nov. 24 at The Theatre at Arts Garage, 180 NE First St., Delray Beach (north side of the parking garage). Performances 7:30 p.m. Wednesday-Friday, 2 p.m. Saturday and Sunday. No Saturday night. Running time about two hours including an intermission. Tickets are $30-$45.  Call (561) 450-6357 or visit www.artsgarage.org