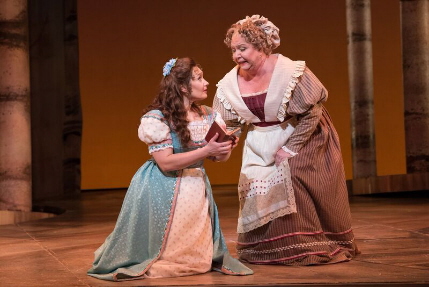 This may be heresy, but maybe grand opera shouldn’t always be so grand. Florida Grand Opera’s current production of Tchaikovsky’s romantic tragedy Eugene Onegin reportedly has a more intimate feel than many predecessors. But that only points the way to an idea that might make this classic even more affecting.

This rather simple plot about doomed romances among the social elite in 19th Century Russia focuses on the tempest of emotions raging inside the principals. While bravura belting bouncing off the back balcony is one way to represent such passions, imagine the impact if they were performed in a smaller venue in the theatrical equivalent of cinematic closeups where much could be accomplished with acting rather than lung power.

FGO’s production was undeniably well-sung opening night, reasonably well-acted for opera and skillfully staged. The orchestra sounded a bit muted but deftly did justice to what some aficionados contend is the master’s finest serious work.

As usual, the party and ball scenes were lush, expansive affairs that made use of the company’s large cast of supernumeraries in the chorus. Similarly, an epic scope was furthered by the sets based around tall birch tree trunks (rented from Opera Carolina) and the moody lighting.

But the strength of the production are the vocal performances opening night (the leads are double cast): Russian soprano Dina Kuznetsova making her local debut as the dewy naif Tatyana but her fourth run at the part, tenor Chad Johnson as the ridiculously jealous poet Lensky and baritone Franco Pomponi who reprises a role deep in his repertoire as the impossibly handsome and impossibly unfeeling title character.

The story, drawn faithfully from Alexander Pushkin’s wildly popular novel in verse (a pop icon in Russia akin to Gone With The Wind), is simple. Wealthy country lass Tatyana, all of 16, falls madly in love at first sight (and we mean at first sight) with the neighboring brooding playboy Eugene whose best friend Lensky is affianced to Tatyana’s older sister Olga.

Eugene is a self-centered cad who has no interest in any serious entanglement. So when Tatyana writes him a lengthy outsized declaration of love, he coldly shuts her down. She is crushed.

Perhaps trying to dodge Tatyana or reinforce his independence, he dances with Olga repeatedly at a ball. Lensky gets overly offended, fights with Eugene, and challenges him to a duel, which he loses. Eugene goes on a world-wide roadtrip for a few years. When he returns, he finds a mature, refined and gorgeous Tatyana married to a distant relative, Prince Gremin.

Eugene is now insanely and instantly smitten with Tatyana, falling to her feet overcome with emotion. She admits she still love him, but she refuses to leave Gremin. Smart lady. Eugene is left on stage on his knees a shattered man. At least for a few days, you can assume.

Kuznetsova may not be a convincing teenager, but her swan-like transformation into a young lady is completely credible. Her rapturous voice is lovely and supple, making a triumph of the opera’s most famous scene in which Tatyana has an 18-minute aria as she composes her love letter to Eugene. It is, indeed, a tour de force which earned some of the most sustained applause heard in recent seasons.

The smolderingly hot Pomponi, who looks like a cross between Will & Grace’s Eric McCormack and Route 66’s George Maharis, exudes the confidence of someone who knows a role inside out. His Eugene is aloof from both people and life. When bad things happen, he is certain they are not his fault. So it’s a testament to his acting that the audience believes it when Pomponi’s Eugene is reduced to such anguish in the final scene. His strong controlled baritone can be chilly in the first two acts and then impassioned in the third.

A nod is due  Jeffrey Marc Buchman who has staged the action – in concert with the lighting by Helena Kuukka – to clearly underscore relationships, such as putting Eugene off to himself in group scenes like the outsider he is. When Gremin sings a second unnecessary reprise of his paean to love, Buchman has Eugene and Tatyana, surprised to have discovered each other in this setting, slowly move towards each other as if the rest of the world has vanished.

Acclaimed Russian conductor Alexander Polianichko has carefully guided these vocal performances in his first visit to FGO and he obviously knows this piece beloved in his homeland. The FGO orchestra has returned the favor with a technically fine rendition. But the bright shimmering sound that you associate with other Tchaikovsky works is pointedly missing.

In fact, despite all the histrionics and a gunshot, the whole evening has a slight lackluster tone. But if this was done in a smaller venue where we could concentrate on the people rather than the spectacle, it might land more effectively.

Others in the cast are Lyubov Petrova alternating as Tatyana, John Brancy alternating as Eugene, Martin Nusspaumer alternating as Lensky, Damian Diaz and Lievens alternating as a peasant, Courtney Miller as Olga, Alex Soare with a lot of old age makeup as Prince Gremin, Robynne Redmon as the grils’ mother Madame Larina, Denyice Graves alternating with Melissa Fajardo as the nanny Filipievna, Dominick Corbacio as Monsieur Triquet, Calvin Griffin as Zretsky and Benjamin Taylor as the captain.

In opera, certainly in this piece, the audience is simply supposed the savor the heartfelt music not fault the sluggish dramaturgy. But this pretty simple journey takes a long, long three hours.

It would be more effective if you were close to the singers and able to get lost in the emotional maelstrom as well as the music. 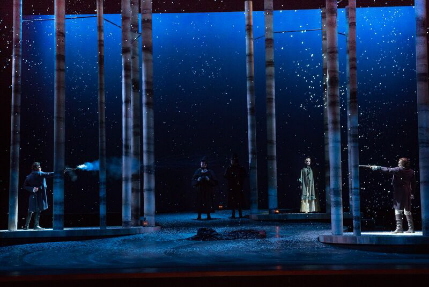