Oy Vey! So Jackie Mason and a Belly Dancer Walk Into Wolfie’s 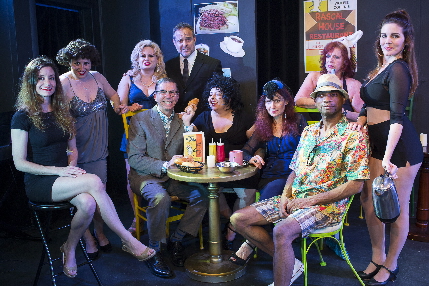 Okay. Here is easily one of the most bizarre theatrical ideas since Aristophanes thought it would be funny to write a comedy about some birds. What follows all really happened – sort of.

In 1977, Ginger Reiter is working toward a graduate degree, teaching the hearing-impaired at the University of Miami and moonlighting as a belly dancer. She becomes one of the legendarily large legion of lovers of stand-up comic Jackie Mason who frequently played in Miami Beach. They have a liaison that Ginger says lasted 10 years and Mason says lasted 10 minutes.

The result, in any case, is an out-of-wedlock love child, Sheba. Mason initially denies paternity in court in 1987 but DNA forces him to acknowledge that he owes child support. Then Jackie goes on to other conquests, visiting his child a couple of times. Years later, Sheba meets him for dinner in New York where she is pursuing a career as a comedienne herself.

Fast forward about 12 years. Reiter, now an English teacher in Broward County, writes an autobiographical musical comedy about all this. A musical comedy. A unique choice as a vehicle for revenge.

Somehow it gets an off-off-off Broadway run around 2010 – and a few other productions since then — under the title 902 Punchlines & Pregnant, The Jackie Mason Musical. She even commissions the legendary caricaturist Al Hirschfeld to draw a logo.

And here’s the kicker, folks: Reiter was portrayed by their grown love child, Sheba.

Now to the present day. Reiter gives the show a new name: Both Sides of a Famous Love Affair – The Jackie Mason Musical.

This creation is now on view at the Empire Stage in Fort Lauderdale with Sheba again playing her mother and with Ginger directing, working the box office and manning the lighting/sound board.

The saga, set in South Florida delis and clubs including the iconic Wolfie’s Rascal House, features a cast of eight including Sheba herself again. They snap through a procession of hoary Borscht Belt jokes and 21 musical numbers with such titles as “The Early Bird Special” sung to a tango, “Mama’s Always Right” and “This Yenta.” At one point, Sheba and two of the deli waitresses stop to perform a belly dance at the Eden Roc Hotel’s nightclub.

If you haven’t figured it out yet, this doesn’t work. Every aspect ranges from amateurish to ham-handed to, at best, earnest. The only virtue is that almost everyone involved is trying their darndest to put it across.

One of two key problems is that Reiter the director and playwright can’t decide whether this is a broad comedy in the style of some second-rate Catskills routine or an uplifting tale of a young woman’s triumph over adversity. So we get a lengthy parade of jokes awaiting a rimshot, some mediocre comedy songs and a few heartfelt ballads.

It should be no surprise that this show makes less-than-no attempt to show the titular “both sides of a famous love affair.” Mason is depicted as a self-centered, shallow, lothario (his sex appeal baffles anyone who has seen this hangdog gnome in real life) and (spoiler alert) he ends the play a lonely directionless shell of a man who has discovered that popularity is fleeting, and an admission that “I am a low-life who knows how to tell jokes.” It should be noted, as indicated by a 1989 interview with Reiter by the Sun-Sentinel’s Matt Schudel, that this account of leaves out a lot of salient details.

To be fair, Reiter and the actors deliver most of this with tongue planted in cheek, and some of the material makes you laugh in spite of yourself. Obviously, they hoped they were putting across a wry tale on rye with a bit of heart, but it feels like three-day old kreplach.

Mason says to Ginger, “I’ll call you later. It was a pleasure meeting me.” Ginger’s controlling mom, pushing Ginger to go on a date with Mason, says, “I’m not saying go to bed with him – at least the first night.” A patron says to Mason, “Are you calling my wife stupid?” Mason replies, “Not as stupid as you were for marrying her.” It would take a Henny Youngman, Alan King, Rodney Dangerfield or, well, a Jackie Mason to pull off this material.

The other crippling aspect is the performance of David R. Gordon as Jackie Mason. Impresario Gordon can be forgiven much for his service to the South Florida theater by providing his tiny Empire Stage as a venue for so many small emerging companies. And grant that Reiter has given Mason awful dialogue that Meryl Streep would have difficulty animating.

But Gordon’s Mason is deadly bland. Gordon has found one, maybe two, of Mason’s deadpan delivery cadences and applies them to every single line – funny, sad, angry, whatever. What starts out annoying becomes grating. Further, Gordon, like some other actors on stage, often sings flat and misses notes — although we dare you to try to sing lyrically while trying to sound like Jackie Mason.

Sheba Mason herself, who looks a bit like Mae West in her later years, throws herself into this undertaking with a courageous amount of self-deprecation and good humor. Opening the show as herself, Sheba acknowledges her unprepossessing zaftig looks, although she makes the most of dresses with plunging necklines: “This is what you get when you don’t use protection.” She has a reasonably decent voice for the musical numbers and a game attitude throughout.

Reiter’s score is a combination of Alan Sherman-like comedy numbers and torchy ballads, none of them memorable, but with enough oy veys to keep some patrons giggling.

If you are under 60: For more than a half-century, Mason has been a ubiquitous figure in the entertainment world. With a memorable Lower East Side accent, Mason built a durable career as a pugnacious, sometimes political stand-up comic with distinctly Jewish-themed material, working the Catskills resorts, Miami Beach clubs, several one-man shows on Broadway including one earning a special Tony Award, radio gigs, film roles, appearances on most television talk shows and earning two Emmys, one for a voiceover on The Simpsons. He also has been involved in several high-profile controversies and lawsuits.

But according to Reiter and others, he has also been a profligate ladies man. I can testify that I have seen him twice late at night in a Times Square deli booth with a lovely young lady on each side of him. He seems to be sighted everywhere, even now. On opening night, a refreshment stand seller was about to tell Reiter about a patron who has a Jackie story, but Reiter cut her off. “Everyone has a Jackie Mason story,” Reiter said.

By the way, Mason himself is making an appearance on Jan. 26 at the Kravis Center. It’s doubtful he’ll arrive a few days early to catch an evening performance.