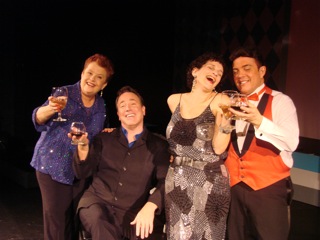 The lovely lady I sat next to at Irving Berlin Salutes America at The Plaza Theatre in Manalapan said she had stopped coming three years ago to shows mounted by the previous tenant, Florida Stage, because the material was getting “too out there.”

But she relished this re-re-reiteration of the Berlin songbook and, judging by the standing ovations from several members of the 100 percent Greatest Generation audience Friday, so did a lot of people.

They had good cause. Four capable performers plus the pianist/ arranger delivered the musical equivalent of a familiar old down comforter and a hot toddy for a nightcap. There was nothing electrifying, no fresh insights for those born after World War II, just an unabashedly pleasant, entertaining evening and that’s what the audience wanted.

As always in songbook revues, the sure-fire element is the raw material. In this case, you get 30 classic standards whose intros you don’t know, but whose words you can mouth along with the moment the first chorus begins. No reason to waste space listing too many examples; you already know what they are. I mean the finale is “God Bless America.”

After all, Berlin provided the backbone of American popular music for two-thirds of the 20th Century and not just because he was unbelievably prolific with 1,500-plus songs, but because he had a genius for melody and a feel for lyrics that resonated with the common man without condescending to him.

He’s served pretty well here by two genial crooners and two expressive chanteuses: John Lariviere, Jon Zimmerman, Melissa Boher Jacobson and, notably, Missy McArdle. They’re led by pianist Vic Glazer who also charted the vocal and piano arrangements that toyed just enough with the phrasing and notes that the songs nearly sounded fresh but did not interfere with the audience’s plugging in of half-century-old aural memories.

Three of them do a competent if not enthralling job, but it’s McArdle you’ll remember. Once a mainstay of South Florida musicals, she’s kept her hand in, but hasn’t had the high-profile she once enjoyed when she had seven Carbonell nominations. But all that experience, craft and effusive charisma combine to make her the standout. It’s telling that she has a one-woman cabaret show centering on Ethel Merman coming up because while she doesn’t sound much like Merman (her voice is far more melodious and polished), the two share those clarion singing chops, that straight from the shoulder delivery and the sense that they are genuinely having a hell of a good time performing for you rather than manufacturing that smile and gleam in the eye.

She is responsible for the highlight of the night with one of the few songs you might not recognize, “Manhattan Madness” from the 1932 show, Face The Music. Unlike the rest of the show, the number is an uncharacteristically dark assessment of urban life and requires the singer to negotiate some tricky changes in tempo.  McArdle’s rendition makes it sound a bit like Stephen Sondheim’s “The Ladies Who Lunch,” filled with liquor-fueled anger and disillusionment. It’s a bracing change of pace from Berlin’s usual fare.

Each of her teammates has his or her own heartfelt solo ballad as well as melding together in Glazer’s Manhattan Transfer harmonies. Lariviere seduces the ladies in the front rows with a mellow “They Say It’s Wonderful,” Zimmerman skillfully weaves in and out of the written notes in “Blue Skies” and Jacobson’s lyric soprano caresses “I Got Lost In His Arms.”

All four sell the material with classic showbiz pizzazz; they are a step up from the Plaza’s Barry Manilow cruise ship show this summer. Still, not every number was crisply delivered; a few lyrics got bungled and the group was not always in perfect sync.  But we inadvertently caught a preview, so they will likely tighten it up.

The show created by Plaza producer Alan Jacobson tossed a few amusing curve balls as well. Marilyn Monroe’s signature “Heat Wave” (Berlin’s not Martha and the Vandellas’) was sung by a man, Zimmerman. The comic World War II soldier’s lament “Oh, How I Hate To Get Up In The Morning” was sung by McArdle in khakis. But director/choreographer Kevin Black needs to come up with something more compelling for the singers to do during the instrumental bridges besides wander aimlessly around the stage. The one convincing moment was having Jacobson pull a lover’s shirt out of a trunk and clutch it.

There were welcome shafts of light, literally. Black and Paul Thomas designed the ever-changing lighting that provided admirable visual variety and underscored the shifting moods. The costumes were a procession of well-pressed formal wear. The simple set was backed by vivid projections and generic videos including purple-mountain majesties above the fruited plain, the cover art for Berlin’s sheet music and a wry caricature of Berlin at his piano.

Other than McArdle’s performance, this is classic old Florida theater, which won’t do much for young audiences or even middle-aged audiences, but ought to reassure their grandparents that the music of their lives was, in fact, really that damn good.

Irving Berlin Salutes America runs through Sept. 9 at The Plaza Theatre, 262 South Ocean Boulevard, Manalapan (the Ocean Blvd. bridge is closed for two years; come across the Intracoastal Waterway by Lake Road on the north or Boynton Beach Blvd. from the south). Performances 7:30 p.m. Thursday-Saturday, and 2 p.m. Saturday-Sunday. Tickets $32.  Call (561) 588-1820 or visit theplazatheatre.net.