Plaza’s WaistWatchers Ready Made For Ladies Who Lunch 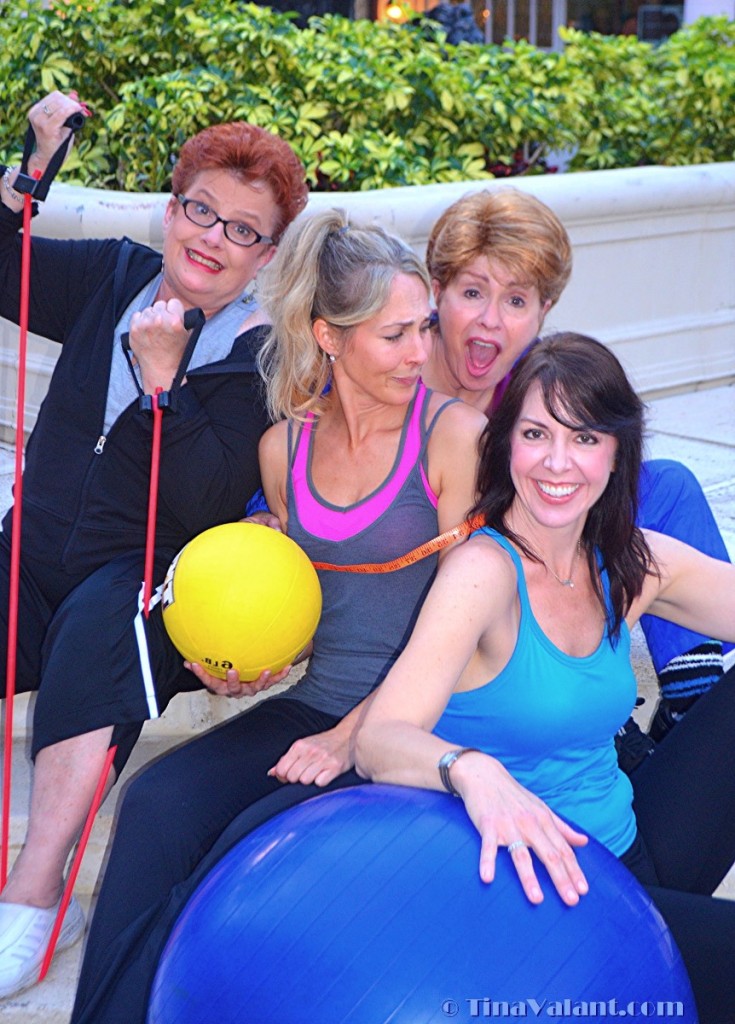 There’s certainly an appetite for WaistWatchers: The Musical — a show for the ladies who lunch as a girl’s day (or night) out, which would account for one-quarter of Sunday’s audience being made up of women’s groups at the Plaza Theatre in Manalapan. (The Grove Women’s Club and Lexington Ladies were in the house at this particular Sunday matinee.)

A musical revue that creates a plotline around four women who meet at a female gym, a la Curves, knows its niche and milks it for all its worth.

Trying its darndest to be cut from the same moneymaking cloth as the mega-hit Menopause: The Musical, a salute to middle-aged ladies in the midst of the dreaded “change,” Alan Jacobson’s WaistWatchers takes a broader brush approach than Menopause, concentrating on women’s obsession with diet and exercise. This allows for a range of subject matter to hang a hook on, but also casts such a wide net that it has a difficult time finding its focus.

At the center of the show are three work-out pals and their trainer who have developed a friendship since meeting at Carla Cook’s gym. Carla (Katie Angell Thomas) is the fit and trim owner/trainer whose ability to juggle a variety of men is an envy of her three charges. Cindy (Shelley Keelor) is newly single after her husband ran off with a younger woman. She’s also job searching, but can’t find anything in the classifieds except ads seeking psychics or “telephone actresses.” Cheryl (Jeanne Bennett) is having a difficult time keeping up with the sexual demands of her husband, Marvin, since he’s discovered the “little blue pill.” And Connie (Missy McArdle) is trying to shed pounds, utterly convinced that her extra padding is the reason her mate, Charlie, is keeping his distance in the bedroom.

Excuse the pun, but the show is so saccharine that even one of the naughtiest numbers Big Balls are a Girl’s Best Friend (set to the tune of Diamonds are a Girl’s Best Friend) has one-liners that could be ripped from a Henny Youngman joke book. The stories that the women share about their lives outside of the gym create thin glue for segues from one toe-tapper to the next.

Conversations about food cravings jump start I Went Through the Buffet Line (I Heard It Through The Grapevine); not wanting to go through the pain of exercise kicks off Lazy (Patsy Cline’s Crazy); more workout pain propels I Feel My Butt Squeeze to Carole King’s I Feel the Earth Move, and a realization of self-acceptance trumpets I’m Fat and Okay (Don’t Rain On My Parade).

There are some stand outs, mostly because of the high energy the actresses muster to sell the numbers, including McArdle’s showstopper If I Were a Size 2 (set to the tune of Fiddler on the Roof’s If I Were a Rich Man) and Bennett’s Viagra to the tune of Maria that she delivers with such earnestness that it’s doubly funny, although a sight gag with a gym towel goes for cheap laughs.

The foursome show off their ensemble work in the Mamma Mia-inspired Botox Queen (ABBA’s Dancing Queen) and credit is due for Jacobson’s laugh out loud lyrics: “having big lips is no disgrace, everyone wants to suck your face.” Thomas displays some peak flexibility in I’m a Cougar Hear Me Roar (to the tune of I Am Woman), yet it’s hard to buy the cougar push since the actress doesn’t seem old enough to be associated with women that are on the prowl for younger men. (And, speaking of men, ladies take note: the small percentage of males who are gracious enough to spend 90 minutes of their lives here should get a get out of jail free card.)

Andy Rogow’s direction and Kevin Black’s creative choreography keep everything moving merrily along cleverly in the one-set show. Two longish blackout scenes for a costume change and to show a passage of time don’t work very well, although it does help to alleviate what would be an unnecessary intermission. Another scene where Thomas as Carla breaks the fourth wall to talk to the audience while distributing a few small morsels of chocolate (much to the chagrin of those that had worked up an appetite amid all this talk about food) seems out of place, too. It’s obvious that the short scene is to take focus off set pieces being placed on stage.

There’s no doubt that WaistWatchers has legs — it’s already booked to run at the Plaza Theatre (founded by the play’s author Jacobson) through May 12 and had a few limited runs on the road already. WaistWatchers, which debuted in 2007 at the Maltz Jupiter Theater, has a recipe for success. With some added ingredients — more clever lyrics, a snappier script and a tighter focus —Menopause fans across America who are looking for a hormone-infused group theater replacement could be enjoying a show cooked up right here in South Florida.