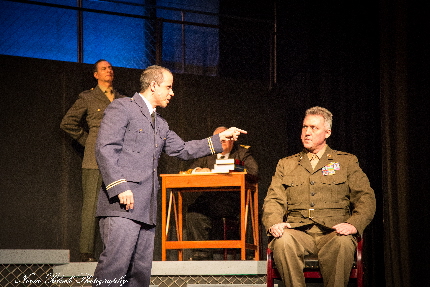 It takes courage to mount a play whose 1992 film version is as iconic as A Few Good Men with unforgettable performances by Jack Nicholson and Tom Cruise. But this production of Aaron Sorkin’s play by Pembroke Pines Theatre of the Performing Arts provides a promising harbinger as the long-time community theater’s second production as a professional troupe.

Strong performances by Skye Whitcomb and Lito Becerra molded by director Jeffrey Bruce, plus the incisive script by Aaron Sorkin, offset any shortcomings that a demanding audience member might require.

The PPTOPA crew faithfully depicts the collision of uncompromising honor and unquestioning loyalty that are not always reconcilable.

It depicts an investigation into the death of a Marine serving on the fence line at Guantanamo after two platoon mates tie him up, gag him and shave his head in an unofficial action called a Code Red. The victim, PFC Santiago, had been trying to escape persistent harassment by getting a transfer and finally told outside commanders that someone had illegally fired a rifle from the fence line. He was found dead.

The two low-level soldiers accused of murder open the play erect in spotlights admitting in clenched staccato military-speak that they have done what they are accused of. But military defense lawyers – two reluctantly, one gung ho – inquire into the details in hopes of getting a mitigated sentence. Part detective story, part courtroom drama, this A Few Good Men surges steadily without emotional peaks until the now famous explosion of Col. Jessup in the witness chair.

Short-timer Lt. (j.g.) Daniel Kaffee (Becerra), a young smart-aleck but sharp-eyed Navy defense lawyer doing his time until he can muster out, is a plea bargain king who has never taken a case through trial. That may be why he is assigned to the case with his softball field buddy Lt. (j.g.) Sam Weinberg (Alexander Marante) because serious politics beg for a quick closure: The Gitmo base is headed by Jessup (Whitcomb), a charismatic career soldier with considerable clout as he heads for a high-level post in Washington. Only an internal affair officer, Lt. Cmdr. Joanne Galloway (Constance Moreau), an admirably eager but humorless internal affairs investigator, wants Kaffee to take the case seriously and look deeper.

They get little help from the accused, Lance Corporal Harold Dawson (Devin Riley), whose steadfast devotion to the ideals of corps include unquestioning obedience to orders, no matter the personal cost, and PFC Louden Downey (Matthew Salas), a down-home grunt terrified being out of his depth after what both men believe was simply following orders. They believe in the corps’ loyalty mantra: unit, corps, God, country – which you assume is prioritized when necessary in that order.

The defenders have to deal with the defendants’ reticence to aid their own defense as well as the stone wall of cover-up that arises.

Becerra, a lithe compact actor with a broad smile and expressive visage, revels in Kaffee’s talent for defusing anything and everything with a wisecrack that indicates someone who takes nothing seriously, least of all Galloway’s insistence that the search for justice must be his priority. Especially impressive is how Becerra and Bruce credibly chart Kaffee’s slow absorption into the case until he is as committed as anyone, risking spending the rest of his service in even duller work in a remote location. Per the script, he plays much of his courtroom maneuvers directly to the jury – us in the audience.

Of course, the linchpin performance belongs to Whitcomb, a veteran actor-director and co-founder of Outré Theatre Company. Not that anyone would dare channel Nicholson, but Whitcomb creates his own Jessup who might talk to a close aide in dulcet tones that clearly are a deceptive feint, confidently bark orders to another, but then explode into a fist-thumping rage. But unlike the film, Whitcomb’s Jessup may talk a great game about the profound responsibility of keeping the country safe – and the carte blanche it gives him – but Sorkin’s script allows Whitcomb to expose the arrogance, base tactics and self-serving aspects that undercut Jessup’s claims of pure altruism. And yes, when he has to deliver the “to be or not to be” line of the piece, Whitcomb gives it his own delivery followed by unleashed volcanic fury.

Peter Kareotes creates the unswervingly loyal Lt. Kendrick, a Bible-spouting zealot with a frighteningly unquestioning obedience to Jessup as the embodiment of the corps. His performance is a bit over the top, but so is the role (the film version by Kiefer Sutherland left out the religious obsession).

Also in the cast are Michael Vadnal as Capt. Markinson, the troubled conscience of the base; Christopher Dreeson as the post medical chief Stone; Aaron Bravo in flashbacks as the doomed victim Santiago; John Henry Parks as the prosecutor Lt. Ross, plus Kent Harris, Nicholas Palazzo, Larry Chidsey and Alvin Entin as the judge.

Bruce keeps the story moving smoothly and doesn’t allow the actors to stay too riveted in one place, a plus since this is a very talky play. One of the problems is that the momentum flags when the stage goes dark for some actors to leave the stage, others to enter and minor furniture is moved on and off. It would seem more fluid if in some scenes, the people in the courtroom just stayed put while the other characters needing to have a conference or strategy scene just move downstage into a spotlight.

You can carp here and there: Some of these soldiers have spent too much time at the bottomless pasta bar, some forget to pull their ties up and button their jackets correctly, some of the lighting is intentionally chiaroscuro but other times it’s just too dim and not wide enough to encompass a group of actors. Some performers are stronger than others. The few lines exposing Kaffee’s inner motivating demons go by so quickly that they get lost.

But the courtroom set works well enough, especially since the stage is always topped off by the silhouette of a sentry walking atop a wall with barbed wire and facing out toward the enemy, a reminder that there is always a real threat underpinning Jessup and company’s commitment.

The 1989 Broadway play with Thomas Hulce (Amadeus) and Stephen Lang (Avatar) was a modest success in part because of the sharp, insightful and witty dialogue by Sorkin, years before he penned The West Wing TV series. The script actually sold to Hollywood before the curtain rose.

PPTOPA has been tackling challenging work through much of its 20-year-history as a community theater, sometimes quite effectively. This production is reason enough to check out its professional outings for its shows coming later in the year such as Urinetown and Evita.

A Few Good Men by the Pembroke Pines Theatre of the Performing Arts plays through Jan. 26 at the Susan B. Katz Theater of the Performing Arts at the River of Grass ArtsPark, 17195 Sheridan Street. Performances 8 p.m. Friday-Saturday, 2 p.m. Saturday-Sunday. Tickets generally $19-$34. For more information visit www.pptopa.com or call (954) 437-4884. 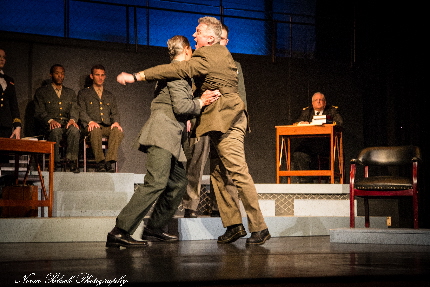