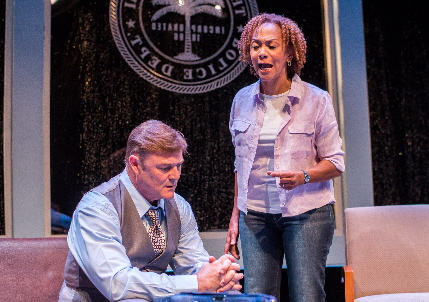 American Son at Zoetic Stage doesn’t offer solutions to the complexity of race so much as explore with increasing intensity and unnerving specificity the exact craggy contours of the gulf.

Christopher Demos-Brown’s play does not map the terrain like an outside observer but brings the audience alongside those struggling with the conflicting and seemingly irreconcilable pressures on not just African-Americans but everyone awash in the social maelstrom.

The theatrical result is a harrowing descent into conundrums about – among many aspects — identity, culture, parenting, fractious police-minority relations and African-Americans assimilating into the white image of The American Dream. All are topics whose relevance has only deepened since Demos-Brown first started writing the play about five years ago.

The nightmare depicts a black professor and her estranged white husband called to a Miami police station in the middle of a rain-soaked night, in response to vague references to an “incident” involving their 18-year-old biracial son. As details emerge involving his interaction with police on a traffic stop, the audience watches the inexorable sucking of a whirlpool.

Earlier productions included a Broadway run last year starring Kerry Washington, which was filmed for a Netflix release last fall. Another 16 or so companies around the country have bought the rights to produce it in the near future.

But Zoetic, a troupe co-founded by Demos-Brown, has given this Florida premiere its own vibe due to the individual vision of director Stuart Meltzer and lead actors Karen Stephens and Clive Cholerton whom Demos-Brown had in mind when he wrote it.

The fine Broadway edition started with the anxiety machinery already spinning at 1,000 rpm and quickly built unabated with Washington giving a bravura but focus-pulling performance.

Meltzer and company, working hard not to telegraph what’s coming, open with the mother deeply worried, but they allow the evening to rise, ebb and swell again toward its inevitable crescendo. The Zoetic version seems to focus on both parents with the police’s outlook getting an even-handed airing as well – all of this without changing the script.

Every one of the flawed individuals on stage and offstage are neither hero or villain. Indeed, by the end, we can only feel compassion for what, for the moment, seems an insoluble paradigm they are all trapped in.

The story begins with Kendra, a psychology professor from Coral Gables, inside the waiting room of an institutional substation at 4 a.m. on her cellphone desperately trying to contact her son Jamal as thunder, lightning and rain assault a black void outside large windows.

Kendra (Stephens) has been called with some nebulous inquiry about Jamal’s new car being found. Exceptionally intelligent and well aware of the problems of minorities dealing with police, she is invoking immense self-control to keep from immolating in fear and fury. She repeatedly cross-examines inexperienced young officer Larkin (Ryan Didato) who insists she must wait for public affairs Lieutenant Stokes. She begs, rages, vents, in front of him, knowing she is at his mercy. Larkin maddeningly sticks to unimaginative protocol because it absolves him from dealing with this clearly no-win situation.

In the opening minutes, race is never alluded to. But then Larkin says automatically that he “completely understands” Kendra’s concerns because he has children. That releases her first aggressive salvo.

KENDRA: How old are they?
OFFICER LARKIN: Well… they’re…
KENDRA: Any of ‘em Black?

At that moment, with the audience issuing an audible intake of breath, the divide emerges that will grow until it dominates the play.

OFFICER LARKIN: Wow… We’re really gonna go there?
KENDRA: Oh, we been there for a while.”

For instance, his specific questions about Jamal’s vital statistics and appearance clearly stem from a police officer’s accustomed expectations of what a black youth looks like.

Eventually, her estranged husband Scott (Cholerton) arrives. Larkin sees a badge on his belt and assumes he is Stokes. The officer volunteers that the son was among three black males driving in a Lexus who were stopped during some incident. Scott reveals he is an FBI agent and tries to use their shared law enforcement bond to get more information but to only marginal avail. Scott is a stern straight arrow who loves his son without reservation but is a rock-ribbed conservative proud that his son will likely go to West Point.

As they await more information, the parents renew a wide range of disagreements and resulting wounds. Among other issues, they have battled for years about how to raise a bright and promising teenager facing the challenge of being a biracial young man hopefully thriving despite a world of prejudice and violence.

The ensuing debates are complex, detailed and depict racial divides infecting every aspect of their lives including the fissures in their marriage. Much of it circles on their mutual decision to give Jamal every chance to succeed by nurturing his ability to merge with the mainstream white society. But that has robbed him of half his cultural birthright and Jamal has been rebelling recently by putting his hair in corn rows, wearing baggy jeans, and acting out.

As the couple let fly resentments and recriminations, their frustration and fear boil over fueled by a trickling of incomplete facts. Kendra verbally challenges the supervisor Stokes (James Samuel Randolph), a veteran black officer who counter-challenges Kendra’s playing her own race card. Kendra and the audience might expect Stokes to be sympathetic given that he is African-American, but he is a no-nonsense veteran of the thin blue line who has experienced both racism in the community and the evil in the community.

Of course, this is not going to end well.

Demos-Brown, who has debuted many of his works at Zoetic, limns all this with accomplished skill. While the playwright’s dialogue is heightened naturalism, he can slip imperceptibly into almost poetic phrases. That culminates in a long theatrical aria about Kendra being unable for years to sleep through the night. She describes sneaking into his bedroom as Jamal slept.

“Sometimes I go in and touch the muscle on his neck or shoulder. Stand there and bullshit myself: Don’t worry Kendra – he’s big and powerful. This world can’t hurt him.’ Till that nagging feeling comes back and I dwell on how fragile he is. Whatever nightmare it is just woke me up: Someone texting in an SUV… an errant punch in a bar fight… a ruptured appendix in some third world country. Most mothers can sit there in the dark and get rational… go back to sleep. But sometimes… in my nightmares… I see nooses and crosses and white men with Brylcream crew-cuts.”

One effective element likely lost on audiences elsewhere are the Miami-area references that evoke specific images locally such as Overtown, Liberty City and especially on point, the 1980 beating of Arthur McDuffie in which the officers involved were acquitted of murder.

One joy is watching the always superb Stephens inhabit a complex, intelligent yet flawed human being whose mobile features and strained voice betray her interior pain even when the character is trying hard to mask them. Just as fine is Cholerton who makes Scott’s point of view as acceptable as Kendra’s, seen from his viewpoint. Cholerton, an acclaimed local director, hasn’t acted on stage since Palm Beach Dramaworks’ Who’s Afraid of Virginia Woolf 14 years ago but he has not lost an ounce of his skill.

With convincing chemistry, you don’t catch either delivering a performance. The two, guided by Meltzer, verbally swirl in emotional combat with arguments that Demos-Brown has crafted to dissuade us from siding with one or the other viewpoint. Both actors exude the characters’ pride that they have built productive lives while navigating an unforgiving society. Stephens’ Kendra and Cholerton’s Scott each has a fierce certainty that they know the way the perilous world works – leading them to anxiously await their son’s final emergence into an auspicious adulthood after having sacrificed and invested so much of themselves to that goal, which has consumed their marriage.

Randolph, the veteran actor and educator, is absolutely credible as a man who has learned the realities of the world as a law enforcement officer. Didato also ensures that his young officer is not some closet racist or even an overly-defensive police officer.

Different audience members will focus and respond to different aspects because Demos-Brown is exploring several threads simultaneously. But everyone will likely walk away with added insight.

To read an advance feature on the productions, click here. 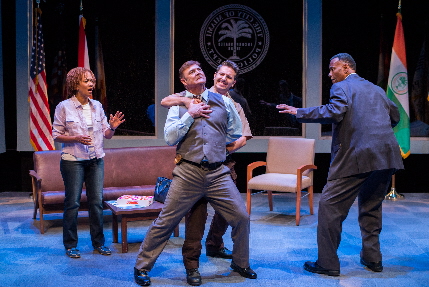