Mosaic’s Death and the Maiden Is Taut Psychological Thriller 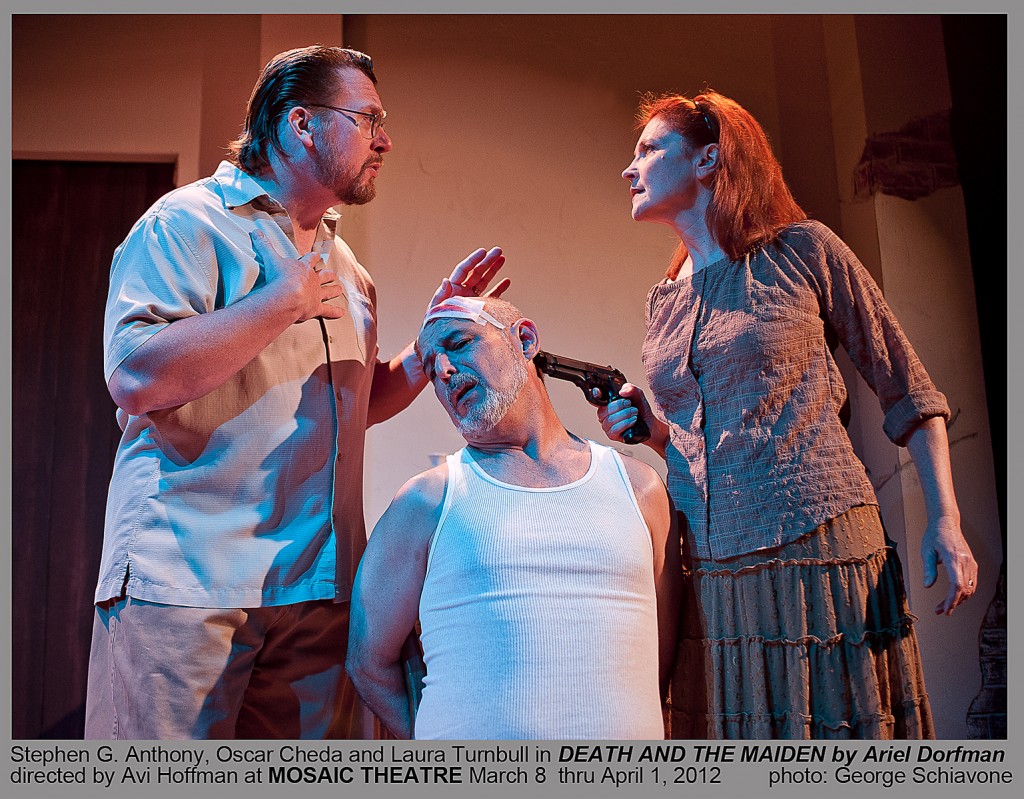 Torture, vengeance and morality take center stage in Death and the Maiden, a suspenseful thriller now receiving a riveting production at Mosaic Theatre in Plantation.

Death and the Maiden, by Chilean playwright Ariel Dorfman, is set in an unnamed country, probably Chile, after a dictator-run government has been overthrown and democracy is taking flight. But Dorfman’s underlying message, by not specifically naming the country, is that such a story can take place, under certain circumstances, anywhere.

The more immediate setting is the isolated beach house owned by human rights lawyer Gerardo Escobar (Stephen G. Anthony) and his wife, Paulina (Laura Turnbull). Paulina was kidnapped, tortured and raped by the former regime years ago when she was a med student, and that experience has affected every day of her life. Gerardo’s car gets a flat tire one night and is helped by a seeming Good Samaritan named Dr. Roberto Miranda (Oscar Cheda). When Dr. Miranda returns in the middle of the night to congratulate Gerardo on his appointment to the new president’s commission to investigate the horrors perpetrated by the former regime, Paulina hears his voice and is convinced that Miranda is the same sadistic doctor who raped her and oversaw her torture.  She takes him captive, intending to put him on trial in her living room. Miranda maintains his innocence and Gerardo, ever the attorney, acts as Miranda’s lawyer, believing his wife to be indulging in a paranoid revenge fantasy.

Death and the Maiden, which takes its title from a string quartet piece by Schubert that Paulina’s rapist played during her torture, is a taut psychological thriller, and Mosaic Theatre’s production is impressive.

Director Avi Hoffman keeps the pace brisk and the tension building.  Douglas Grinn once again creates a set which fits the play and has a few surprises.  Matt Corey’s soundscape, which include the soothing undulating ocean waves, enhances the juxtaposition of horror and serenity, as does the lighting design by Suzanne M. Jones. Her realization of each moment, from the bluish tones of moonlight and the sultry shadows cast by a waning ceiling fan, to the stark beachy daylight and evocative memory scene, is evocative and gorgeous.

The performances are compelling. Cheda is remarkable, veering from jovial affability to self-righteous indignation, then resignation and finally defiance, in less than 90 minutes. Anthony is terrific as a man caught in the middle of whether his moral obligation belongs to his wife or the legal system, and his performance illuminates Gerardo’s inner struggle, especially in his moment of epiphany.

Turnbull is marvelous. She imbues Paulina with a practicality one might not expect, outlining her intentions with the matter-of-factness of checking off a grocery list. She is often wistful, then angry, then sarcastic, and Turnbull colors every emotion with glee and heartbreak.  In the scene in which Paulina hears Miranda’s voice, Turnbull’s performance is gut-wrenching, as the memory of torture shows on her face.

The beauty of Death and the Maiden is that it strives to keep the audience guessing about who is the oppressor and who is the oppressed. Can Paulina’s sense memory be trusted or has the psychological damage she’s suffered finally resulted in a complete break with reality? Is Dr. Miranda as innocent as he claims?  Which is and should be more important to Gerardo: the legal principals he holds dear or extracting retribution for his wife’s suffering? And what happens when victims take their revenge on their torturers?  Doesn’t the vicious cycle of power-hungry sadism repeat itself?  Each individual’s answers to these questions, and whether the play keeps them guessing about what really happened even past the climax, will depend on each person’s frame of reference and politics.  But the debate it sparks is one thing that makes Death and the Maiden such a delicious piece of theatre.

To see a video of WPBT uVu video interviews with the cast, click here.